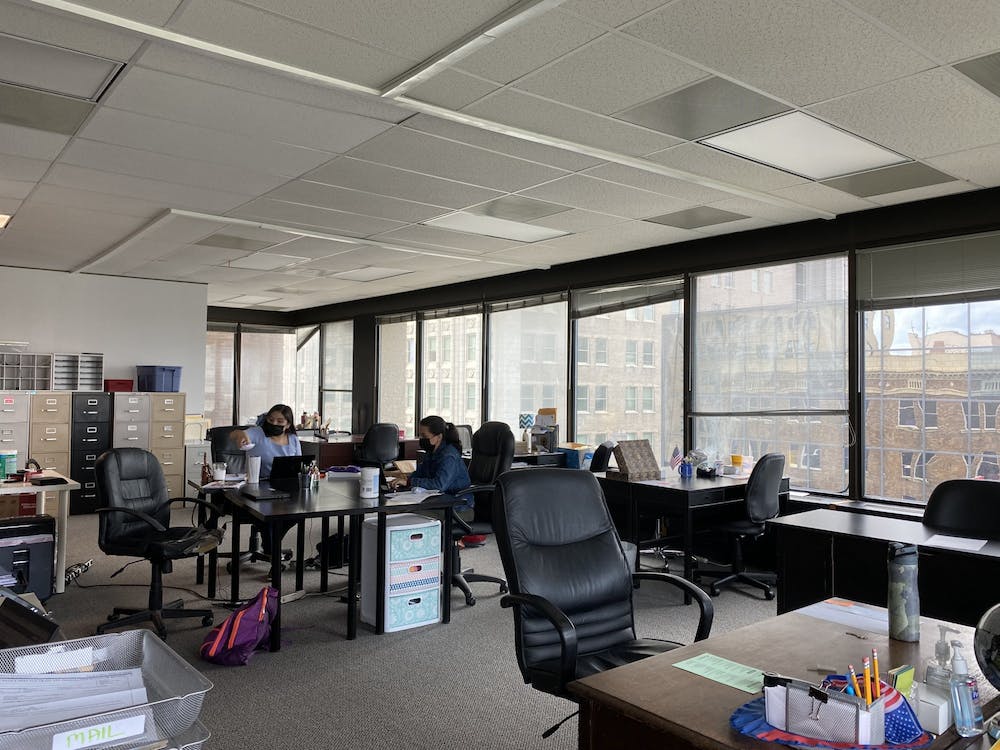 Photo by Nyah Phengsitthy | Elon News Network
Workers Elizabeth Ayala and Genesis Beltran work at the Church World Service in Greensboro. CWS is one of nine nonprofit organizations contracted by the United States government to provide free aid to refugees and immigrants.

Bhutanese refugee Birendra Chhetri has spent the last four years giving back to the community that gave him a new start. He arrived in the United States in 2012, having spent the previous 18 years in Nepal after fleeing the genocide in Bhutan with his family while he was still young. Chhetri now works with the same organization, Church World Service in Greensboro, to give refugees and immigrants the same work, housing and sociocultural opportunities he was given. Chhetri works to give refugees a new start.

Church World Service is one of nine nonprofit organizations contracted by the United States government to provide free aid to refugees and immigrants in need like the Afghan refugees. These centers help newcomers rebuild their lives by creating connections with local healthcare centers, schools and housing offices. As over 31,000 Afghan refugees are being processed on seven different military bases, workers like Chhetri prepare to welcome them into North Carolina and help start the green card process.

Chhetri is a part of the Lhotshampa people, a Nepali-speaking Bhutanese ethnic group persecuted by the Bhutanese government's attempt to ethnically cleanse the country during the 1990s. He and his family were forced to flee the country and take refuge in Nepal. Chhetri became so immersed in Nepalese culture that he began to work for a non-governmental organization serving refugees like himself.

This culminated in his desire to continue his engagement with CWS Greensboro. Chhetri initially worked as an interpreter in the area before pursuing his bachelor’s degree at the University of North Carolina at Greensboro. This enabled him to work for AmeriCorps before being hired by CWS to work as a legal counselor for green card citizenship for refugee clients.

“Finally working as a legal counsel and seeing them grow, seeing them move ahead and get their green cards,” Chhetri said. “It's really, really heartwarming. It’s motivating.”

Just as Chhetri works to give back to the refugee community he came from, so does Greensboro. With such short notice, the city has had little time to prepare proper housing for an influx of people. Instead, individuals and faith congregations are opening their doors to strangers by offering rooms in their homes for these families and individuals free of charge.

In May 2021, President Biden announced the withdrawal of American troops in Afghanistan, ending the United States’ longest war. Following this announcement, the Taliban led a major offensive, capturing every major Afghan city by mid-August. Afghan President Ashraf Ghani fled the capital of Kabul on Aug. 15,  and the Taliban assumed total control of the country. The government collapsed as Biden pulled the remainder of the United States troops by Aug. 31, which soon began the mass displacement of the Afghani people.

“We haven’t received any Afghan cases here yet,” said Megan Shepard, office director of CWS Greensboro. “But we’ve just received our first assurances — meaning cases have been sent our way for us to either say, ‘Yes, we can accept them’ or ‘No, that we can’t.’ And we’ve accepted them, so we could see those folks arriving in Greensboro within the next day or two, it might be a week.”

CWS Greensboro is not alone in its anticipation. Despite the emergency nature of the situation, refugees are being filtered through a stringent protocol to determine what aid they are eligible to receive. A refugee is an individual who has been forced to flee their home due to a well-founded fear of persecution, however, due to the current immigration laws within the United States, refugees are instead falling under different immigrant categories, such as humanitarian parole — which may leave them without access to federal support.

Under normal circumstances, U.S. humanitarian parole policy extends for no more than 365 days. As of Aug. 24, the United States extended that time period for up to two years for Afghan refugees and also granted them work authorization — something not normally given. Humanitarian parole does not allow refugees to qualify for refugee resettlement programs or seek federal benefits.

“Under the previous administration, the refugee program and just immigration in general was really highly scrutinized, and the resettlement program was nearly decimated,” Shepard said.

Shepard has been involved with CWS for the last seven years helping refugees and immigrants resettle in Greensboro. North Carolina resettles 4% of refugees within the United States, and Greensboro is the second largest resettlement city in the state. This blending of cultures has ingrained a sense of “welcoming people from other parts of the world” in Shepard’s mind. A sense of diversity and inclusion is especially important as CWS prepares for an influx of Afghan refugees.

“Everyone’s coming in at a very different point, but that’s not really what defines a refugee,” Shepard said. “It’s that experience of being forced to flee and that persecution they might face. It encompasses anyone who’s been in that position and has had to flee their country.”

Katherine Reynolds, director of the Humanitarian Immigration Law Clinic and assistant professor at the law school, has overseen this program for the last year and a half and worked with the clinic since 2017. Though the clinic has yet to process any Afghan refugees, as resettlement agencies are often the first step, Reynolds anticipates working with them within the next year.

Reynolds called the situation “complicated” due to the abnormal processing refugees are undergoing. They must be screened to determine which of four classifications they fall under: special immigrant visas (SIV) for those contracted by the U.S. government for less than one year, those who qualify for an SQ — those employed by the US government — or SI — specifically immigrants who worked as translators and/or interpreters — parole, and those who will be granted humanitarian parole.

An SIV applies to any immigrant who worked in Afghanistan or Iraq by or on behalf of the United States government, such as translators or interpreters. Despite being established in 2009, this program has been backlogged since then and is now flooded with new applications — significantly more than its Congressional allocation. Thousands of immigrants are at risk of being turned away from this visa, threatening their safety within the United States.

Reynolds anticipates that a majority of the work at the Humanitarian Immigration Law Clinic will be involved with individuals seeking humanitarian parole for family members left behind. Even then, it is an “unknown” area, as Reynolds is uncertain as to what the clinic’s true role will actually be.

“Humanitarian parole — that means that someone has been inspected and lawfully admitted to the United States but is a temporary immigration status,” Reynolds said. “There’s no path beyond parole to adjust their status. Parole lets you be here for a finite amount of time lawfully.”

As a partner organization with refugee resettlement clinics and other businesses, the law clinic receives its clientele through word of mouth and its partners, such as Senior Resources of Guilford County, Reading Connection and New Arrivals Institute, where people can take citizenship and English classes. In order to gain citizenship in the United States, one must demonstrate an adequate ability to read, write and speak English, so the law clinic doesn’t often need interpreters. In the rare case it does, many of its students and staff have language abilities, or the law clinic will use federal grant funding to outsource interpreters. Reynolds said this has led her to propose a program that would enable undergraduate language students to work pro-bono with the law clinic, providing interpretation and translation services to gain real-world experience.

This partnership is one way students can help. However, it is not the only way to help; advocacy, volunteering, donation and political action are direct ways to influence and change the outcome of a refugee for the better. If donation and volunteering aren’t feasible, Shepard says the best way to create change is to advocate.

“I think, if anything, over the past few years especially, it’s really highlighted just how important advocacy is and that it works, too,” Shepard said.