Despite leading early in the first half, Phoenix fell 3-1 in the non-conference matchup 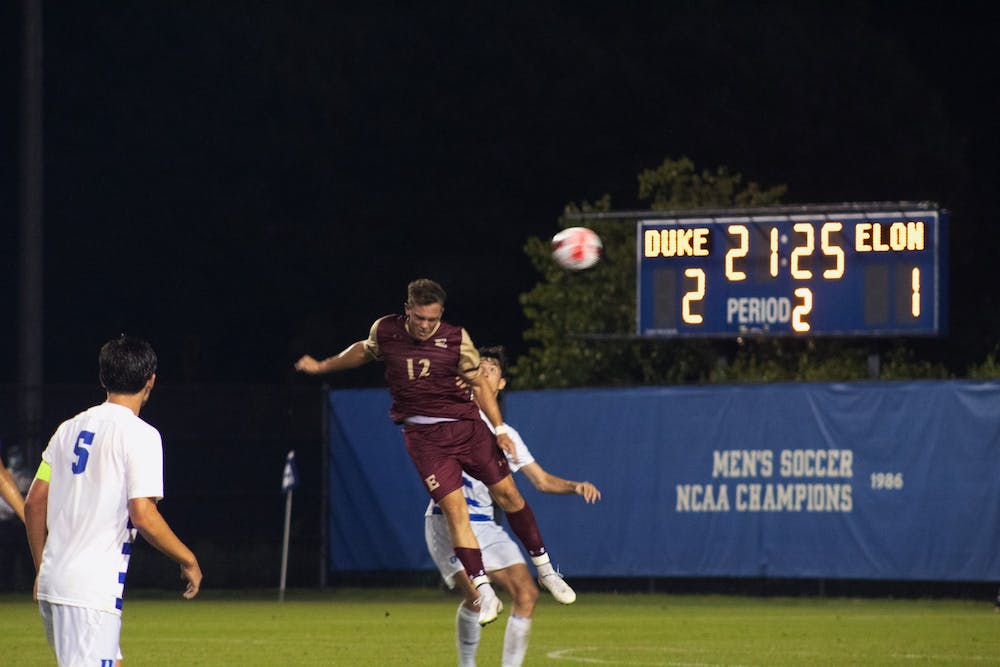 Senior forward Jack Edwards converted his fourth goal of the season in the 15th minute to get the Phoenix on the scoreboard. However, Duke quickly responded with two goals, scoring off a corner kick in the 26th minute and on a penalty kick in the 39th minute, after an Elon handball in the goal area.

While Elon’s back line held up well against Duke’s offensive attack for most of the first half, junior defender Kasper Lehm said he was disappointed with the team’s execution on the two first half Blue Devil goals.

“On the corner, we have to defend better. We have to be more tough,” Lehm said. “The second one is just stupid. Like, a handball in the box shouldn’t happen.”

Lehm came inches away from tying the game late in the first half, as he hit the crossbar on a shot from outside the six-yard box. The close call was the last scoring chance for the Phoenix in the first half.

After being down 2-1 at halftime, Elon generated more offense in the beginning of the second half than in the first. However, the Blue Devils eventually wore the Phoenix down. A Duke goal in the 78th minute all but ended Elon’s hope for an upset win.

Head Coach Marc Reeves said the team had good stretches and fought hard for the entire contest, but was unable to find consistency with its execution.

“In spells, we were good,” Reeves said. “In the second half, the fight was there. Even when we were down 3-1, we were still battling and trying to grab some chances.”

The Blue Devils outshot the Phoenix 20-4 for the game, including a 14-2 margin in the first half. Duke also had nine corner kick opportunities.

Duke entered the game ranked third in this week’s United Soccer Coaches poll, in which Division I coaches rank the top 25 teams in the country.

“They are an incredible team,” Reeves said. “They’re the number three team in the country for a reason. They’re really well coached and they’ve got some highly talented players.”

Despite the loss, Lehm said the team proved it can compete with the top teams in the country and said he believes this performance will give them confidence when it continues its conference schedule.

“The whole team can learn a lot from how quick they play,” Lehm said. “I don’t feel like they’re so much better than us, we had our chances as well.”

Next up for the Phoenix is a home match against the UNC-Wilmington Seahawks, who rank just outside the top 25 in the United Soccer Coaches poll. The match will begin at 7 p.m.