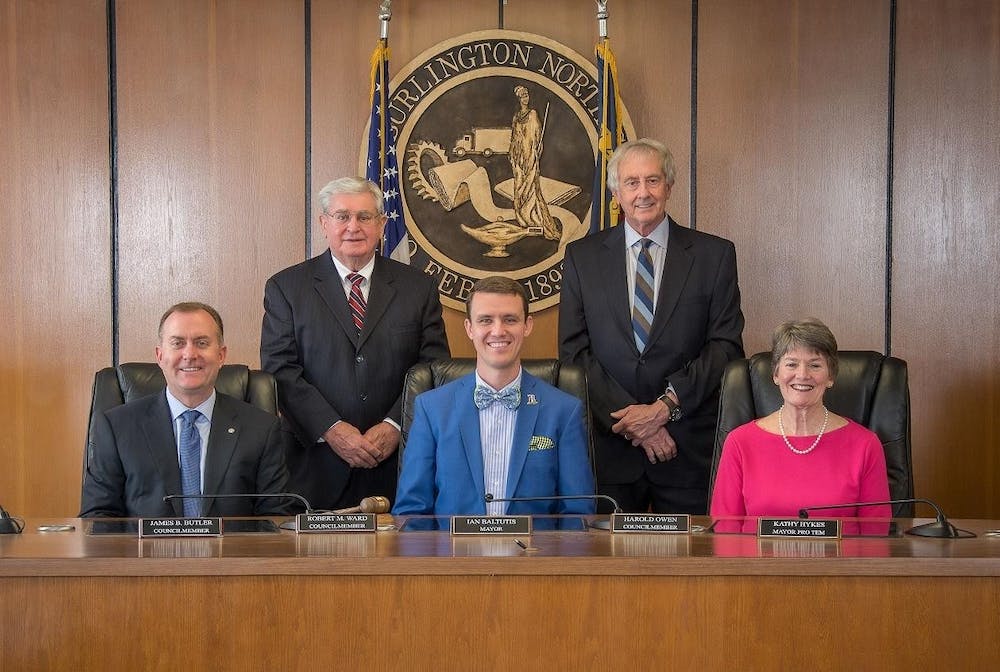 Harold Owen, standing on the right, has always felt called to public service. Courtesy of the Burlington City Council.

In addition to his work as councilman and Burlington city manager for 13 years, Owen also worked in the City Parks and Recreation Department and as a consultant with the North Carolina League of Municipalities. Owen said he believes his 46 years of working for public groups in Burlington provide him with ample experience for working on the city council.

Owen’s plans for his next term, if reelected, are first to help Burlington pull itself back out of the post-COVID-19 economic hardships by working with the county and state governments as well as local private businesses.

“It’s really a rare opportunity where all low levels of government can work hand in hand, attempting to reduce the impact that COVID saddles on so many of our citizens, and also many of our local businesses,” Owen said.

In addition to economic growth, Owen voiced his concerns about public safety and cybersecurity. He said he plans to address public safety in Burlington by increasing employment in local police, fire and IT positions within city jurisdiction.

“When I say public safety, I include fire, because our fire department are first responders to any medical calls, in addition to fire calls, it’s just vital that we have a competent and a near capacity staff to provide those services,” Owen said.

He mentioned how the risks of hacking are increasing, and that Burlington needs some better ways to defend against such threats. Owen said he believes increasing public knowledge of government operations will help in this area.

Owen thinks housing is important too. Through partnerships with the Burlington Housing Authority, federal house loans and a private developer, Owen wants to work toward creating more affordable housing in accordance with federal guidelines and funding the improvement of private property in the city.

“Our city is centrally located here in the state, along US 40, which gives us quite a few advantages,” Owen said.“We’re experiencing positive growth, and it’s important to manage that growth.”

Owen also wants to start working with the state to expand the number of seats on the council in order to better reflect the growing Burlington population, a process that requires revision and ratification of the city charter by the NC state legislature. He said he plans to work in depth with members of the community from all backgrounds in all of these projects.

“As the [city] manager, I’ve literally had the opportunity to work in every community in the city,” Owen said. “What I bring to the table is that I believe people trust me, because people know that I’m there to try and help them.”

By rule of the city’s charter, the election is a nonpartisan event open to all Burlington residents who are eligible to vote. The primaries will take place on October 5, and the four candidates with the most votes there will move on to the next round in the full local election on November 2.