The event allowed students, faculty and staff to gather together to reflect upon current social, political and mental issues within the community 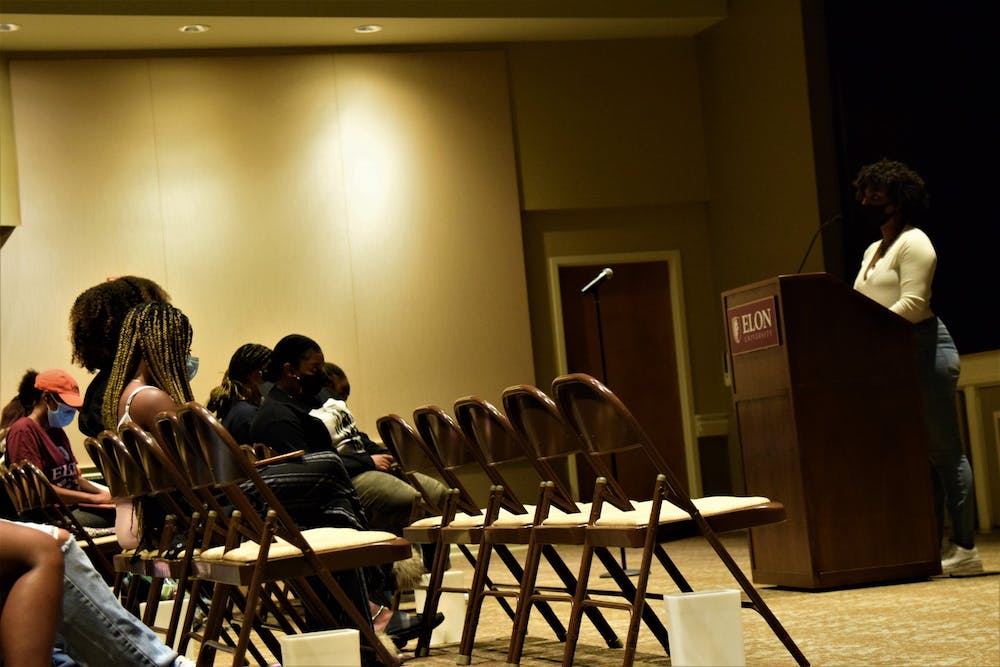 Photo by Kyra O'Connor | Elon News Network
Elon University’s Black Student Union hosted the Free Your Mind event on Thurs, Oct. 7 at 7:30 p.m. in McKinnon Hall at the Moseley Center. The event was an opportunity for students, faculty and staff to address social, political and mental issues, as well as express changes that they hope to see in the future.

Rows of chairs filled McKinnon Hall, lit by soft tea lights. At the front of the space, a podium was set up for students, faculty and staff to speak -- to "free their minds."

Elon University’s Black Student Union hosted the Free Your Mind event on Thurs, Oct. 7 at 7:30 p.m. in McKinnon Hall at the Moseley Center. The event was an opportunity for students, faculty and staff to address social, political and mental issues, as well as express changes that they hope to see in the future.

Junior Nyah Britt, vice president of community outreach and activism at BSU, said the event represents a time of debrief for the Elon community in a post-COVID-19 world.

“The goal of the Free Your Mind event is to get things off of people’s chest, to connect people with resources to deal with these things and to also look for a hopeful eye in figuring out what change we want to see in our community at Elon and even in the world,” Britt said.

Members of the Student Government Association were in attendance at the event as well. Britt is hopeful that the event encouraged senators to bring conversations from the event to SGA meetings and create legislation that is centered around DEI.

“I’m just hoping that with SGA being present, them hearing these things, they can take these things and figure out ways to start initiatives that can move us in a better direction when it comes to diversity on campus,” Britt said.

Elon University junior Nadine Jose, who also serves as the student director for the Center for Race, Ethnicity and Diversity Education and a member of SGA, attended the event and really liked the points of discussion brought to the gathering’s attention.

“I think being here is a really great opportunity to see value in all perspectives,” Jose said. “I would just be remiss to say that I am a student leader who cares about DEI and not come here.”

Jose said that one of the main purposes of hosting the event was to allow people to share their experiences and thoughts in a safe and heard way. She said she appreciated the vulnerability and courage of those who spoke at the event.

“I am so proud of all these people who have the ability and the courage and feel vulnerable enough and safe enough in this space to say their peace and say their perspective, even if it can be critical of Elon and can be critical of the way Elon has run,” Jose said. “I think it’s really important and integral for students to be able to have a space where they could say all these things.”

Despite the quality of discussion and experiences shared at the event, Jose said she could not help but feel like it was lacking in attendance -- especially compared to a similar event held last year by BSU, which filled Young Commons.

“It's difficult to be in these spaces, and try to host events that are super inclusive and that welcome different community members,” Jose said. “For not a lot of people to show up, it's a little demoralizing.”

Sophomore Demetria Hall is in SGA as a class of 2024 senator and came to Free Your Mind because she liked the event last year. While Hall also said she enjoyed how the event turned out and was grateful to everyone who shared their stories and experiences, she cannot help but feel disappointed at the number of people in attendance this year compared to last year, too.

“Not saying they’re not because the event was smaller, but it definitely made a difference — all these people like we’re here for you. We’re here to support you,” Hall said. “It’s just like, where are you now?”

Jose said it is especially difficult to create change without the help of allies who may have more privilege here at Elon. With a lack of the majority of the Elon population — Elon is a predominantly white institution  — Jose said it is difficult to feel supported as a minority identity.

“People talk a lot about diversity, and seeing diversity, but I think a really big factor of that is E and I in DEI,” Jose said. “Ensuring that the diversity that does exist here feels like they're part of a community, and not just a small faction community, but the Elon community as a whole.”

Britt said she hopes the event allowed students, faculty and staff to reflect upon efforts of diversity, equity and inclusion across campus — in addition to how students and the university can work together to improve.

Overall, Jose said she is proud of the support and sentiment featured at the event, but urges the rest of the Elon community to drive, educate and learn how to do more.

Kyra O’Connor contributed to the reporting of this article.

This article was originally published Oct. 6, 2021 and has since been updated.