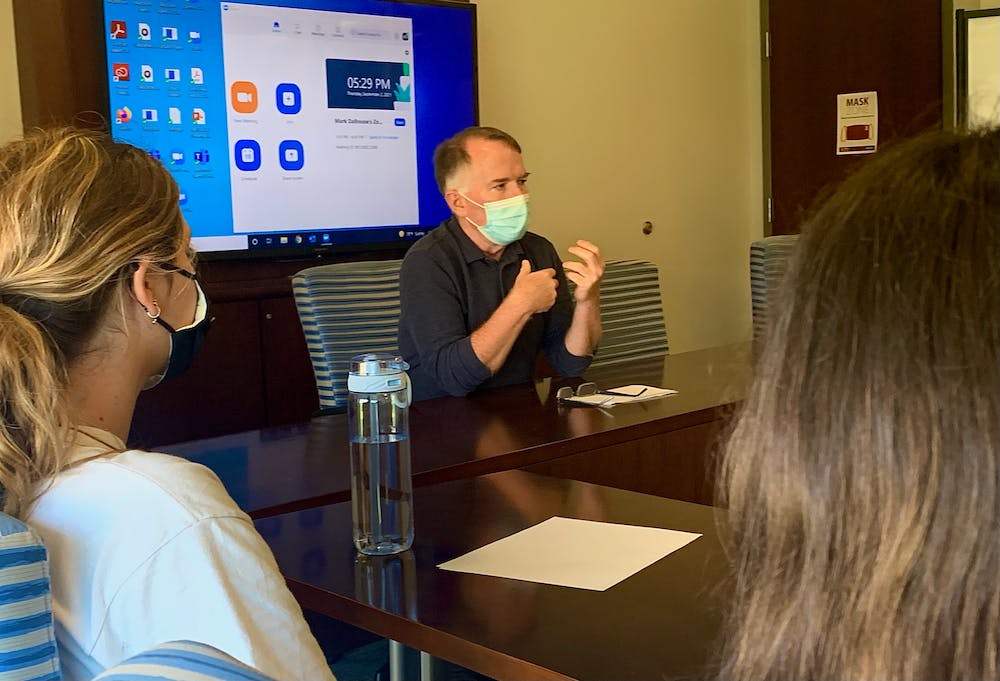 Photo by Abigail Hobbs | Elon News Network
Director for Global Education Initiatives Mark Dalhouse expands on a story about 9/11 in his class. For years, the focus of this class focused on the past events from 9/11, but this year was different when the Taliban entered Afghanistan after 20 years.

As Director for Global Educational Initiatives Mark Dalhouse planned his COR 1100, The Global Experience, class this summer, the Taliban had just taken over the government of Afghanistan. For years, his class revolved around the tragic events of 9/11, but this year it became even more important.

“It occurred to me, watching this unfold over the summer, that this has been our first-year students' entire lives,” Dalhouse said. “The United States has been at war in Afghanistan because of 9/11, and they have never known a time that that was not the case.”

Dalhouse structures his COR 1100 class for students to build a global foundation of the world’s current events and understanding diverse communities. He hopes this course will help students to become more involved in what’s happening around them.

Students like Elizabth Driggers feel that the class has affected their entire mindset.

“My perspective of 9/11 has changed drastically as a result of taking Mr. Dalhouse's Global Experience class,” Driggers said. “This class opened my perspective a bit more to understanding the importance behind reaching out for conversation and getting to know one another. If our goal is to mend divides, then I think it's time to really get to know one another and listen to what the other person has to say.”

Driggers wanted to do something more with her understanding of ideological and ethnic divides. Dalhouse and Driggers decided to bring Millions of Conversations, a nonprofit that encourages conversation about embracing identity and uniting around common values, to Elon. The organization launched at the university this fall.

"This class opened my perspective a bit more to understanding the importance behind reaching out for conversation and getting to know one another. If our goal is to mend divides, then I think it's time to really get to know one another and listen to what the other person has to say."

What sets this class apart from other global experience curricula is the study of dispelling  stereotypes about the Islamic faith that have escalated since the attacks in 2001, including the harassment of Muslims. According to the FBI, anti-Muslim attacks are five times more common now than they were before 9/11.

Students enrolled in this class have more opportunities to immerse themselves in current events, including listening to insightful speakers and helping out in the local community. This year the class welcomed John McConnell, a senior speechwriter for former President George W. Bush during the 9/11 attacks, who spoke to the class about that day 20 years later. Dalhouse hopes to plan similar events to help his students connect history to the current news.

Driggers said, “When I entered the class, I had a basic understanding of the tragedy; following the course I was not only more aware of how it is still affecting our world today, but also how we as Elon students have the ability to create meaningful change.”