A blown lead made the match close, but the Phoenix persevered and come out with a victory against the Delaware Blue Hens 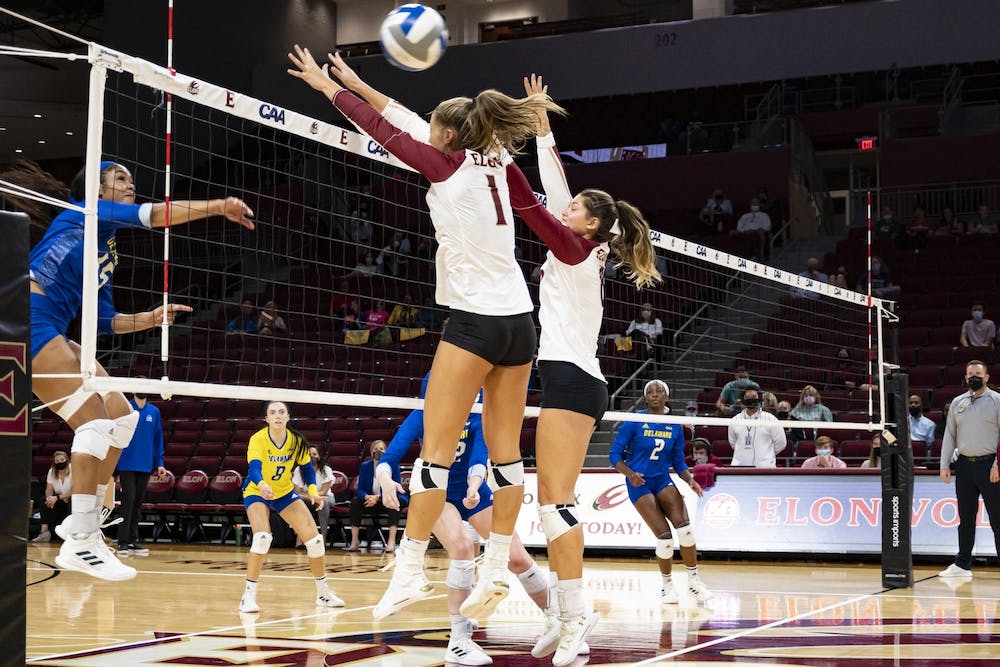 
Elon University seniors Leah Daniel and Natalie Cummins jump for a block during the match against the University of Delaware on September 25, 2021 in the Schar Center.

Elon University’s volleyball team earned a hard fought win against the Delaware Blue Hens on Sept. 25, rallying from behind in the fifth set to avoid a potential collapse.

After winning the first two sets, Elon looked to be on its way to its third straight Colonial Athletic Association victory. However, Delaware battled back to force the match into a decisive fifth set.

Entering the fifth set, Delaware had all the momentum and was primed for an upset win. As in the two previous sets, Delaware took control early, racing out to an 11-6 advantage. However, the Phoenix rallied, winning 11 of the final 15 points to earn a five set victory.

Head Coach Mary Tendler said the team was able to regroup and come back strong after falling behind in the fifth set.

In the beginning of the match, the Phoenix looked unstoppable, jumping out to a quick 7-1 lead. The lead remained comfortable throughout that set and Elon won, 25-15.

The second set was a completely different story, as Delaware began firing on all cylinders and found holes in Elon’s defense. The Blue Hens raced out to a lead, but the Phoenix clawed back as the set progressed thanks to a strong defense showing. The set tightened toward the end and was tied at 20-20 before Elon won five straight points to take it, 25-20.

The tables turned in the third set, however, as Delaware took a dominant 19-8 lead. Tendler said Delaware’s offense began to take over the match beginning in the third set.

“We came out just really strong and then, all of a sudden, in that third set Delaware started passing better and it was really tough to stop their offense,” Tendler said. “They did a good job following the scouting report and knowing what they were going to do. They just started being more aggressive.”

As the Phoenix once again aimed to finish the match in the fourth set, the Blue Hens showed the same grit and determination from the previous set. With Elon’s energy diminishing, the team was unable to close out the match, losing the fourth set, 25-20.

After a slow start to the final set, Elon battled back with an impressive offensive run to survive with a victory. Senior outside hitter Leah Daniel said the team lost its momentum in the third and fourth sets but was proud of how they responded late in the fifth.

“We started off with a lot of energy and kind of died off,” Daniel said. “We regrouped and found ourselves again and were able to come back with a lot more energy.”

With this win, Elon is now 3-0 in CAA play and has won three matches in a row.

Daniel led the team with 22 kills. She said she is happy with the team’s undefeated start to CAA play.

“We are finally starting to come out and prove ourselves game after game what we’re capable of,” Daniel said.

The team returns on Sunday for another matchup with Delaware, as it looks to continue its undefeated start to CAA play at 1:30 p.m. at Schar Center.