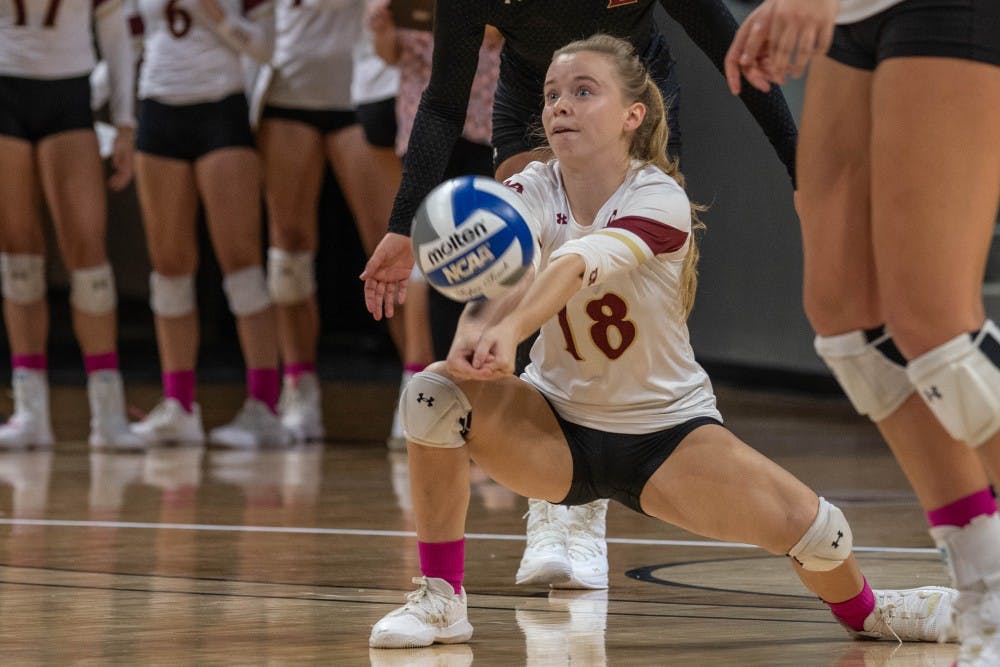 Elon University volleyball players Leah Daniel and Jordan Gower both had exceptional seasons this year and now have the awards to prove it. Daniel took home the Colonial Athletic Association Player of the Year award, while Gower was named to the CAA All-Conference Second Team.

“They’re two people that are never satisfied with where they’re at,” Tendler said. “They’ve gotten better from the day they stepped into the program, and they’re going to keep getting better and better.”

Daniel, a junior who plays outside hitter, is the first member of the Phoenix to ever be honored as the CAA Volleyball Player of the Year and was selected to her second consecutive All-Conference First Team. Daniel was also recognized as the first player in program history to be named to the East Coast All-Region team, which was announced by the American Volleyball Coaches Association on April 13. Daniel will now have a chance to become nominated to the AVCA All-American team.

“I’m definitely very grateful,” Daniel said. “But obviously I wouldn’t be here without my coaches, the athletic staff or my teammates in general. I’m very grateful for everyone that’s helped me get to this point.”

Daniel led the CAA in kills with 177 and she averaged a conference-high 4.43 kills per set. She also finished the season with four double-doubles — matches where she reached double digits in two stats, including aces, kills, blocks, digs and assists — and was a key offensive force on the court for the Phoenix this season, according to Tendler.

This season was the first time in Daniel’s volleyball career where she was challenged to play all six rotations around the court, but she said her confidence on the court never wavered in her new role.

“Instead of being the person that other people are afraid of on the front row as far as how offensive I can be, I was able to kind of bring that to the back row aspect and also be someone that the other team was afraid to hit to,” Daniel said.

Gower, a sophomore defensive specialist, finished second in the CAA with 203 digs and 5.08 digs per set on the season. The sophomore also had a season-high 33 digs against Davidson College on March 20. She finished every game this season recording double-digit digs.

kills were made by Daniel in the CAA. She ended with a conference-high average of 4.43 kills per set.

digs were made by Gower, finishing second in the CAA for digs.

“I felt really proud of myself,” Gower said. “All of us worked really hard. I’m just glad our hard work could be recognized at the end of the season.”

Elon went on a five-match win streak during the month of March, which included two wins against the University of North Carolina-Wilmington and their fifth win, which came when the Phoenix defeated James Madison University for the first time in program history on March 24.

“We’ve all seen how good we can be, I feel like we just need to find the balance,” Daniel said. “I feel like when we have an equal balance between being offensive and being defensive, we’ll be unstoppable.”

Elon finished their season with a 5-5 record and went 3-5 in conference play. While the season didn’t end as the team hoped, the team was still able to get an idea of what they’re capable of in the future of their program.

“We have so much potential on our team,” Daniel said. “There’s so much depth with everyone on the sidelines and everyone on the court. I feel like as a team, we just have a lot of confidence knowing where we can be, and it really just makes everyone push the extra little bit to win conference next year.”