Elon University seniors look back at their four years 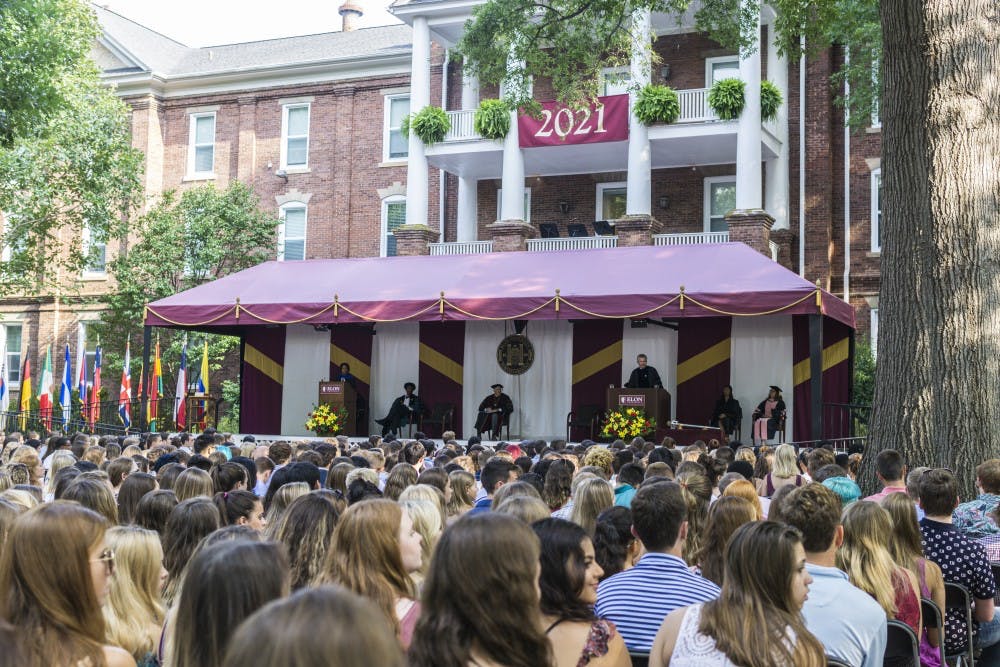 
Steven House speaks during the 2021 New Student Convocation ceremony on Aug. 24, 2017. House is planning on stepping down as provost at the end of 2019.

Almost four years ago, the class of 2021 sat Under the Oaks at New Student Convocation, gathering with their peers and families to hear words of encouragement and learn about the university’s traditions.

During the August 2017 ceremony, Randy Williams, vice president and associate provost for inclusive excellence offered profiles of three members of the Class of 2021 and spoke about their variety of experiences and accomplishments.

Now, as they prepare to walk across the stage on May 21, the three seniors Williams highlighted look ahead to the future and reflect on their individual Elon experiences.

Lucia Lozano Robledo remembers sitting with her freshman year roommate when Williams started to speak about her achievements. The three students highlighted are not made aware beforehand, and it is a complete surprise.

“I left the Earth,” Robledo said. “I had no idea. It was kind of a crazy way to start college with that special mention. It was definitely really special and surreal.”

Robledo, who is a native of Bogota, Colombia, has lived in North Carolina for nine years and was the 2017 recipient of Elon’s highest academic award, the William R. Kenan, Jr. Honors Fellows Scholarship. She said despite facing many uncertainties though her undergraduate years, she has learned to embrace adversity, especially amid a global pandemic.

“I think college is such an intense growth period,” Robledo said. “You don’t know where you’re going and the person you’re becoming until you’re in it. I think developing open arms for uncertainty is helpful in adjusting, and being flexible and going with the flow of changes. It’s definitely extremely hard.”

Following graduation, Robledo will join the Elon Year of Service Fellows Program, where she will be placed with a local non profit organization and work there for a year.

Looking back at her four years at Elon, Robledo said one of the most impactful experiences has been the mentoring relationships she has formed with her professors and supervisors.

“I think that's definitely something that I'm thinking about now in my last week of college,” Robledo said. “Just wanting to honor, pay my respects and thank these people that have seen you go through it all.”

Elliot Rivette, an anthropology and journalism double major, said these relationships are something he is thankful for. Rivette has previously reported for Elon News Network.

“Over the course of the entire four years, I would say that I had a lot of really helpful mentorship experiences with professors, staff and faculty members,” Rivette said. “It's just been really nice, and I like the kind of personal relationships and opportunities for learning one-on-one with people.”

Rivette said he once wanted to learn more about the difference between the traditional book publication process and self-publishing online, and he said a professor who he never had in class sat with him for two hours to explain it.

“That’s the kind of thing that you don’t really get. It seems like that’s very unique to Elon, so I’ve enjoyed that,” Rivette said. “I’ve had issues with trying to get things done when it’s advisors or administration members, but I’ve loved all my professors.”

Rivette said convocation is indicative of the Elon experience.

“In convocation, when they line everyone up, you really get that first sense that I’m one of a huge amount of people,” Rivette said. “You’re very much just a person lost in a crowd, so to then also be highlighted in the presentation reinforces this culture at Elon, where professors and faculty know who you are as an individual, even if you’re just a face in the crowd  — somebody knows you and cares about you.”

"My advice is to value your time and realize that it's going to be over way faster than you expect it to be. Be sure to spend every second that you're here doing whatever it is that you care about, because you're only gonna get the one shot."

Looking back on his four years, Rivette said he noticed how easy it is to lose track of time.

“This has gone by at sometimes what feels like a snail’s pace when you’re in it,” Rivette said. “But looking back, it feels like this has been very fast. And it’s gone by way too quickly.”

Rivette said he doesn’t regret anything he has done at Elon but wishes he could have done even more.

“My advice is to value your time and realize that it's going to be over way faster than you expect it to be,” Rivette said. “Be sure to spend every second that you're here doing whatever it is that you care about, because you're only gonna get the one shot.”

Samantha Casamento remembers the exact moment at convocation, surrounded by her peers, that she heard a name that sounded similar to hers. When she realized Williams was talking about her accomplishments in high school, she was shocked.

Casamento, who formerly served as ENN’s event coverage coordinator, said it’s hard to believe that just four years ago, she was sitting at convocation. She came from highschool with a clear idea of what she wanted to study — journalism. But Casamento said she’s used her time at Elon to try many things and is leaving college having changed her plans.

“I kind of noticed that I was starting to not love journalism as much as I used to, which was super hard for me,” Casamento said. “I kind of put all my eggs in one basket, and I basically came to Elon for ENN. My entire everything was just journalism.”

After returning to her hometown and hearing everyone tell her they couldn’t wait to see her on television after college, Casamento said she realized that was not what she wanted to fully commit to. Casamento is graduating as strategic communications and journalism double major with a Spanish minor and said Elon gave her the opportunity to pursue different interests.

“The comm school set me up for so much success with all the skills we learned,” Casamento said. “My portfolio has videos, it has photography, it has everything, and I’m so proud of all of it.”

Casamento said she feels grateful for the time she was able to spend at Elon and has no regrets. She is in the process of applying for jobs and hopes to find work in New York City following graduation.

“It’s definitely bittersweet,” Casamento said. “It’s going to be super sad leaving Elon for the last time, driving home to Pennsylvania seven hours away knowing I likely won’t be coming back for a while. But I’m just excited to see what the future holds.”