At the regular meeting, the board discussed creating a non-discrimination ordinance, and approved an additional member to the arts advisory board 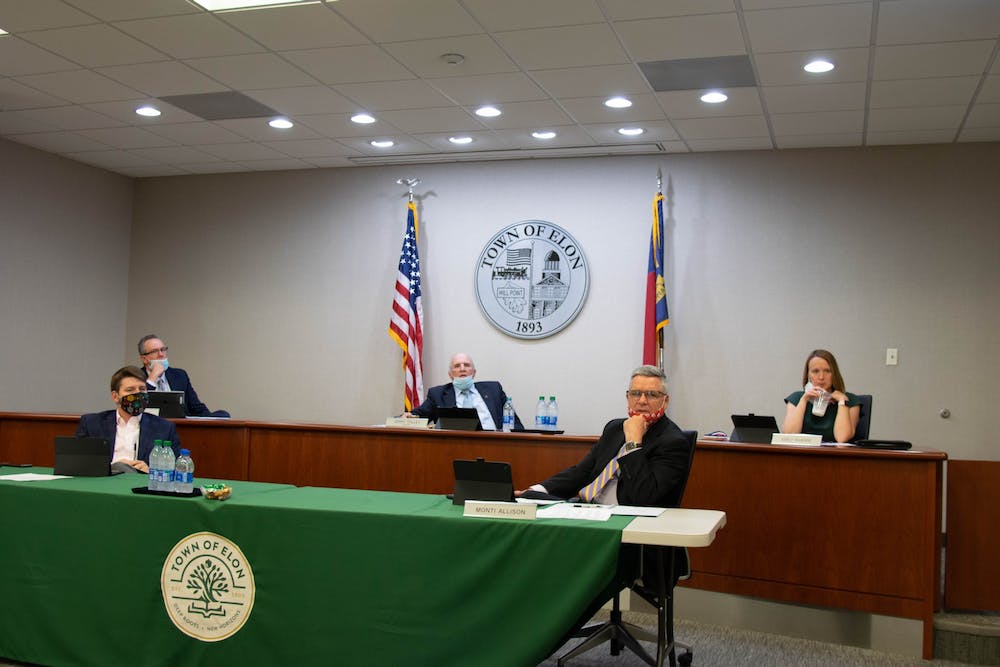 Photo by Kyra O'Connor | Elon News Network
Mayor and town of Elon Board of Aldermen at their April 12 meeting.

The Board of Aldermen discussed adopting a local non-discrimination ordinance at the regular meeting held April 13. At the meeting, the Aldermen approved the addition of Elon University Dean of Student Development Jodean Schmiederer to the arts advisory board and heard from Jeff Stein, chair of Ready & Resilient Committee, regarding the university COVID-19 update.

Local governments are currently allowed to adopt their own ordinances. Alderman Quinn Ray asked the board to discuss what that could look like at Elon.

“It's great that we post everywhere that our town does not accept this, we do not condone discrimination,” Ray said. “But I feel like you need to put your actions behind your words.”

Mayor Jerry Tolley said that the proclamation issued following the pro-Trump caravan addresses that the town does not accept discrimination, so he does not support an ordinance.

“I’m objecting to an ordinance,” Tolley said. “An ordinance is a law.”

The board asked staff to research what action other municipalities are taking as well as creating a committee of board members and community members, and the discussion will continue at next month’s meeting.

Schmiederer was approved by the aldermen to become the fourth member of the arts advisory board. Schmiederer, who has an undergraduate degree in fine arts, planned the art installation following the 2020 presidential election that appeared on East Haggard. Because she lives outside of the town of Elon, her application was subject to the board’s approval.

“Art and public art has always been a personal interest,” Schmiederer said. “I love to get our students more engaged in community art, and just the arts in general.”

The arts advisory board announced the 2021 Repurposed Art Contest open to raise awareness of environmental issues and to support the arts. The context is open to all residents of the town of Elon, including Elon University community members. Entries will be accepted through April 16.

Stein addressed the board at the regular meeting. Stein informed board members that according to self-reported numbers, 4,200 undergraduate Elon University students and 850 employees have received at least one dose of a COVID-19 vaccination.

The next Board of Aldermen meeting will be May 11.