The pilot program has been added in buildings across campus 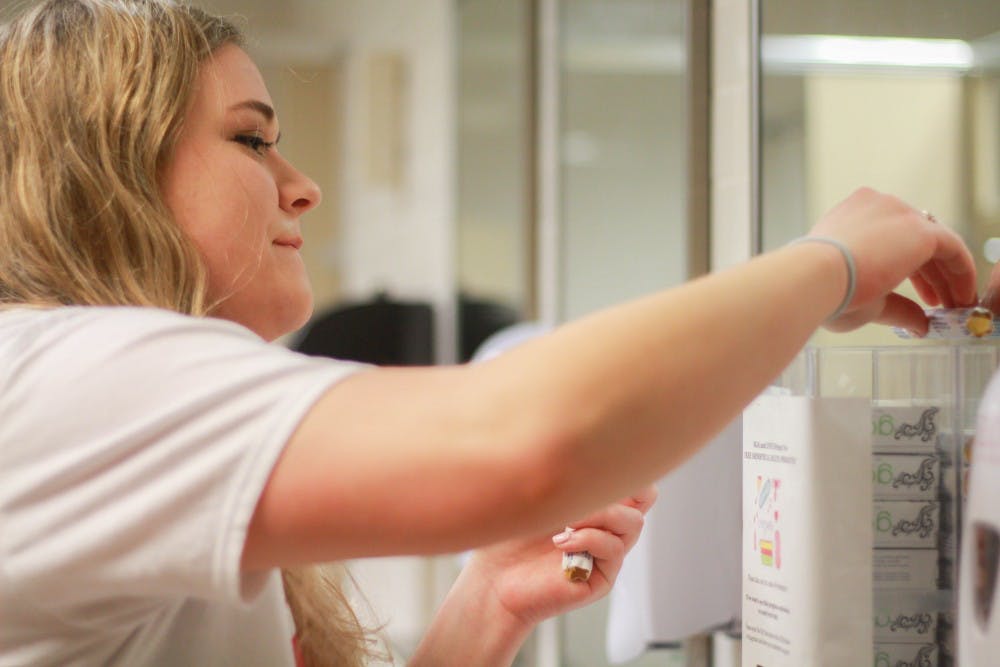 Aside from their council duties, Fliegel and Zinn also co-chair the Student Issues Committee together. The legislation follows a one-month trial period in which the committee replenished the supplies while gathering data in a Google Forms survey.

“We had over 330 responses, which is awesome, and there was no one saying that they didn’t support the program,” Zinn said.

Fliegel said students even left comments about how much they enjoyed the dispensers.

“The only people who didn’t write ‘yes’ wrote ‘other,’ like ‘This idea is amazing,’” Fliegel said. “There was no one that said ‘no.’”

SGA decided to allocate $5,500 per year for two years to the project unanimously. Executive Treasurer Maxwell Pivonka said the legislation “is a great use of funds.”

was given to the program for the next two years for Elon University Physical Plant and SGA to restock products.

The funding for the menstrual products comes from the SGA rollover fund, according to Pivonka, which means the program “will not have any adverse effects on other organization or program funding opportunities.” Student government funds are given to Physical Plant, who will order the products and stock the bathrooms, according to the Senate bill.

Fliegel said Physical Plant has been “so supportive” of the project, and working with them has built “a nice partnership.”

The funds will provide 1,500 tampons and 750 sanitary napkins each month to academic buildings and dining halls across campus, according to the bill. Most of the bathrooms stocked with the products will be women’s restrooms though some gender-neutral restrooms will also be included in the measure.

“Anyone, no matter what they identify as, can use them if they need to,” Fliegel said about the dispensers.

locations on campus will have bathrooms stocked with free sanitary napkins and tampons.

As Elon is already an “inclusive community,” according to Zinn, so providing free menstrual products to a student body that is 60-percent female seemed appropriate.

The legislation only allocates funding for the project for two years. In the recent election, the student body voted to pass an amendment dissolving the Student Issues Committee. The senate decided this because student government should not have to have a committee to know what students need, according to the amendment. But Zinn and Fliegel have high hopes the program will be renewed or expanded after two-years.

“Ideally, we’d love to have the university administration take over funding this initiative,” Zinn said. If the positive feedback the project has been getting continues, Zinn said, more possibilities might open up.

Zinn and Fliegel have been working with Jessica Flacksenburg, the new School of the Arts and Sciences senator, and Louisa Sholar, the new executive vice president, who are both excited to take the reins on the project. They hope Flacksenburg and Sholar can oversee the project after they graduate in May.

“It’s nice to be able to leave a mark on Elon like this,” Fliegel said.