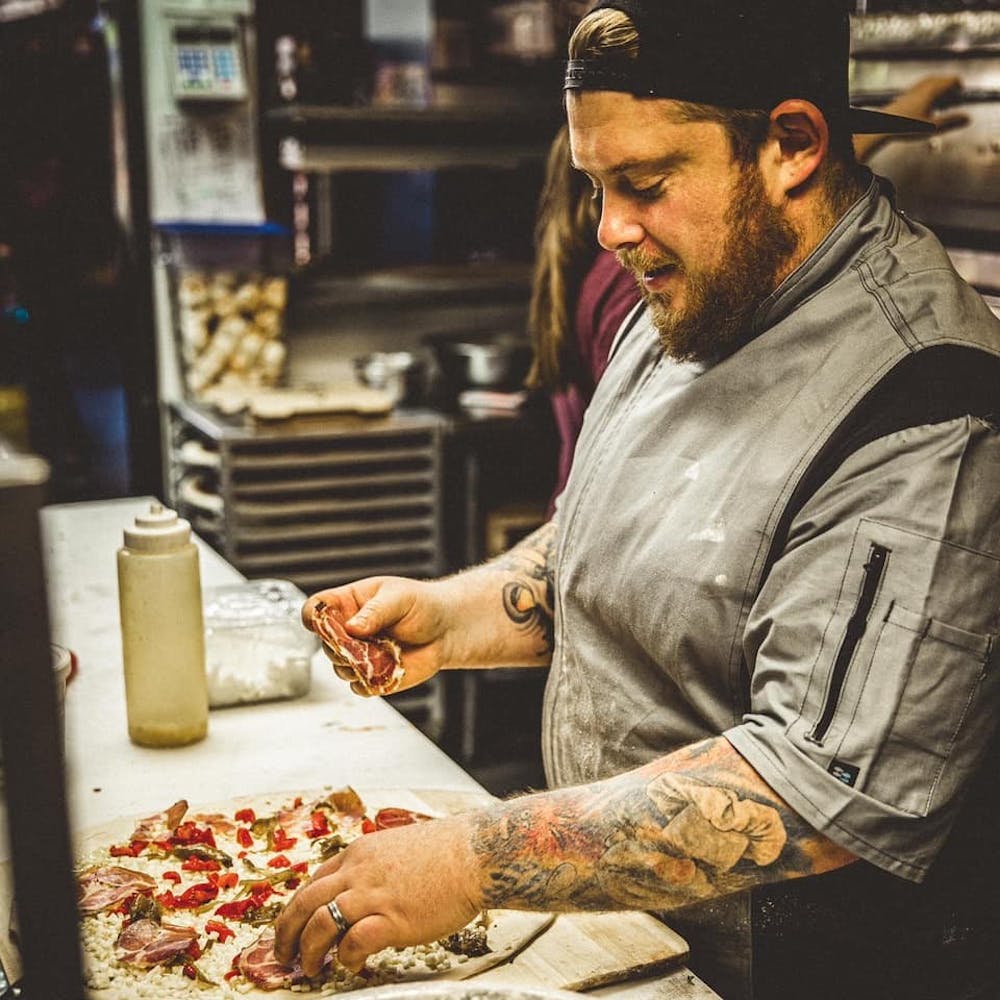 Lincoln Franchell, co-owner of Pandora's Pies in Elon, North Carolina, is remembered by friends and family as a great chef, friend and father. Courtesy of Peter Ustach.

A chef and business owner. A foodie. A licensed mushroom forager. A father, friend and family member. Lincoln Franchell was known by many names.

“Relationships in life with people like Lincoln don't come along every day or every year,” said Ashby Miller, a farmer and friend to Franchell. “He was the kind of people that the world needs more of,” Miller said.

Franchell, co-owner and chef at Pandora’s Pies, located in downtown Elon, died at age 36 on May 10 due to a heart condition. The service will be held Saturday, May 15 at 1 p.m. at Rich and Thompson Funeral Home, and the family welcomes friends at 3 p.m.

In lieu of flowers, memorials may be made to the Liam Lincoln Franchell Scholarship Fund, c/o Fisher Investments, 3120 S. Church Street, Burlington, NC 27215.

Condolences may be offered at www.richandthompson.com.

From chef to co-owner

Taking care of the back-of-house operations at Pandora’s, Franchell created every menu item. After nearly nine years, he took over ownership of the restaurant with Kimberly Walker earlier this year.

The pair met just before Pandora’s opened its doors in Elon in 2012. Walker said she and Franchell shared a passion for good food and for Pandora’s, which is what made their working relationship great.

“There will be times where we might work several days and not really speak,” Walker said. “But once he would open up to you, and you became friends, you were friends for life.”

While he was not originally hired as a chef, Franchell asked Peter Ustach ‘09, previous owner of Pandora’s, for the job. The two were in their mid-twenties when Franchell took on the role.

“Lincoln stepped up out of the blue and said, ‘Hey man, I'm really good at this. Can I get this opportunity, can I show you what I'm capable of?’” Ustach said. “He brought like 15 cookbooks with him in milk crates and all these recipes he had.”

But Franchell’s start in the restaurant industry came before Pandora’s. Growing up, Lincoln Franchell and his brother William Franchell worked together at a restaurant, William washing dishes and Lincoln in the kitchen.

“We worked together, we did everything together,” William Franchell said. “Fishing, swimming, hiking in the woods, exploring. We spent a lot of time together, he was my best friend growing up.”

"Sometimes for us to get to see our families, they would have to come in and just, the look on his face when they would come through the door… You could just tell that he really loved them, loved seeing them."

William Franchell said because his brother started out in the restaurant business so young, he made a point to mentor younger people in the industry.

“He really enjoyed younger people in the restaurant industry and really tried to push the younger crowds to do better for themselves and teaching them things, showing them what his passion was about,” William Franchell said. “He was just such a passionate, loving, caring person.”

Being co-owners of the restaurant, Franchell and Walker were often away from their families. Walker said she remembers that any time Franchell was able to see his wife and son during the day, even for only a few minutes, it was important.

“The way his little boy would run in here and look at him, ‘daddy, daddy,’ and just run up to him. It was the sweetest thing,” Walker said. “Sometimes for us to get to see our families, they would have to come in and just, the look on his face when they would come through the door…  You could just tell that he really loved them, loved seeing them.”

Ustach wanted to incorporate more local ingredients into Pandora’s menu, something Franchell was very passionate about. Pandora’s buys 30 to 40% of food served from local farms, and Ustach said that eight of Franchell’s closest friends are local farmers.

“He was the big one pushing it, farm to table, getting as much stuff from these people that are set up out here right now for the farmers market,” Walker said. “Because if you don't support local, who will?”

Miller, of Ashby Farms, met Lincoln in 2017 when he reached out to sell greens from his farm to Pandora’s. Lincoln was a big supporter of farm to table and could spend hours talking to Miller about the farm.

“He just loved being on the farm, to be where the food was grown,” Miller said. “He had that chef’s excitement about local food.”

Both Miller and Franchell were working fathers, and while Franchell’s business was pizza, Miller said it was clear that Franchell’s main “business” was his family.

“He and I had a business relationship, yet, in our time spent together, his family was priority,” Miller said. “That's just the definition of an awesome dad.”

For Franchell, a man of few words, cooking and community went hand in hand, and he didn’t need to be in the spotlight to create either one.

Just a few years ago, Franchell told Ustach he wanted to learn more about foraging for wild mushrooms. Ustach paid for Franchell to take a foraging class in South Carolina, where he soon became a licensed mushroom forager. He often went foraging with his son Liam, and he sold the mushrooms to Pandora’s and other local restaurants.

“Lincoln is probably the most passionate person I know,” Ustach said. “If he decides that he wants to learn about something, he doesn't go half-hearted, he goes 110%.”

‘He would want people to be happy’

Pandora’s closed for two days following Franchell’s death, and the restaurant reopened its doors on May 13. Walker said the decision to open again was made with Franchell in mind.

Lincoln Franchell woke up every day excited to do something new, to learn and to better himself and his community. Even though it is difficult, William Franchell said he knows his brother wouldn’t want people to be sad.