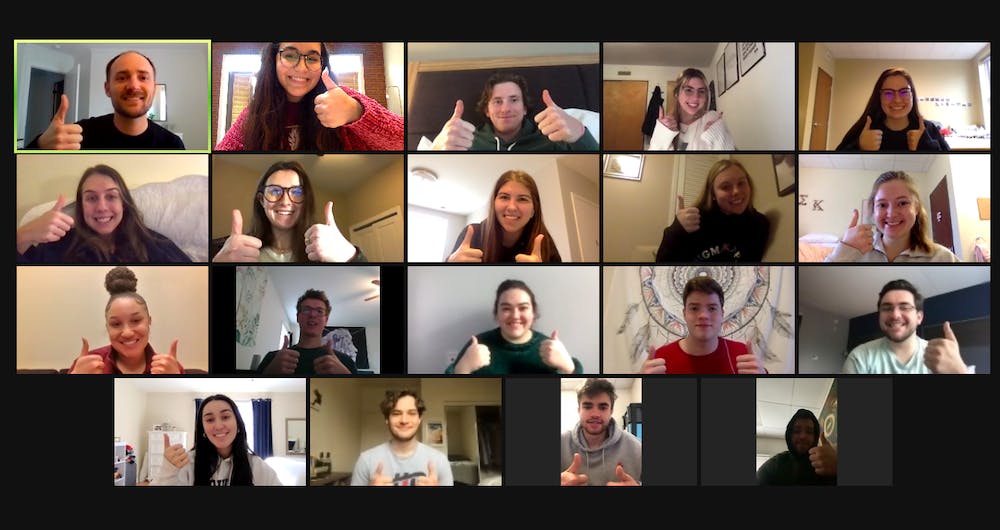 Photo by Ellis Chandler | Elon News Network
Members of Order of Omega held a virtual retreat in February and will be holding another virtual retreat for newly initiated members on May 1.

Order of Omega is an honor society composed of individuals from Elon’s National Pan-Hellenic Council, Panhellenic Association and Interfraternity Council chapters who are considered heavily involved in their greek organizations on campus and within the Elon community. To qualify, members must complete an application and receive approval from their chapter president. They also must have a grade point average above the all-greek average. If their application is selected, they move on to the interview round before receiving a bid and getting initiated.

“Everyone in our org is a strong leader,” Chapter President of Order of Omega Caroline Seelman said. “They lead in their own, different way.”

The organization was originally started in 1959 at the University of Miami and first came to Elon University in 1993. It was recently rechartered during the fall semester by Maria Jose Larrazabal, a graduate apprentice for fraternity and sorority engagement, after years of the organization’s inactivity due to low engagement.

Seelman said that Larrazabal, an alumna of Florida International University, was in Order of Omega as an undergraduate and enjoyed it, so she decided to bring the organization back to Elon’s campus as her last major semester project. Since Larrazabal is graduating this spring, Associate Director of Student Involvement Jordan King will be taking over as the faculty advisor.

“We are really thankful that she has because it has been a great way to connect to the greek community overall, especially during this tiring past year,” Seelman said.

Secretary Cassidy Ball said her decision to apply stemmed from her sister’s positive experience in the organization at her university, as well as a chance to get to know other members of the greek community.

“I thought it was cool because I know a lot of people in the greek community get trapped or stuck in their own organization, and it is hard to break out of it,” Ball said. “So I thought it would be a good idea to get to know other people.”

Over the past year, Elon’s greek community has grappled with COVID-19 restrictions, including last February, when organizations had to revise recruitment plans after the university ordered all fraternity and sorority activity to move completely virtual. Seelman said that socialization within greek communities has been difficult.

“We’ve all faced similar issues this past year due to COVID-19, and these connections you make sitting next to someone in meetings aren’t as organic as they used to be,” Seelman said.

Junior Julia Edwards said Order of Omega has provided a sense of community for those in greek life after socialization regulations changed due to the pandemic.

“Many people from different organizations have all struggled in connecting with those in their greek community due to COVID-19 restrictions,” Edwards said. “It has been great to connect with other community members who have experienced similar situations and work together to better the Elon community.”

Since its rechartering at Elon, Order of Omega has participated in community service, using month-long observances as a guide. One of the organization’s latest projects was to make goodie bags with candy and a thank-you note as a token of appreciation for all 270 Physical Plant workers. Members were required to do three hours of community service in April.

“It is very attainable and a great way to keep people involved in the community and throughout campus,” Edwards said. “As well as show our commitment as an organization to the development of Burlington and Elon.”

Though it is just the beginning of Order of Omega’s new start at Elon, members are already developing plans for the future of the organization.

“My goal for the organization is to utilize it to help the community as a whole,” Ball said. “Whether that be through community service or taking on different projects.”

Order of Omega plans to host fall recruitment in October 2021.