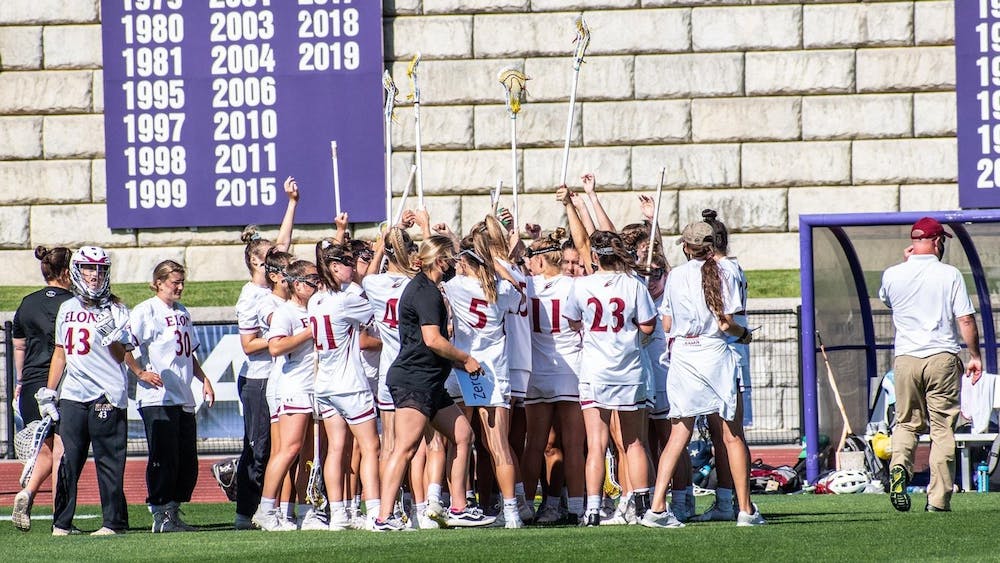 Elon women’s lacrosse (9-3) is out of the Colonial Athletic Association tournament after losing to the No. 5 seed Towson University Tigers (10-7) in the quarterfinals on May 5. Photo courtesy of Elon Athletics.

Elon women’s lacrosse, now 9-4, is out of the Colonial Athletic Association tournament after losing to the No. 5 seed Towson University Tigers, now 11-7, in the quarterfinals. The Phoenix, seeded No. 4, fell behind early and were unable to mount a rally against the Tigers, who controlled the game throughout.

The Phoenix got off to a slow start, falling behind 1-4 with just over 12 minutes remaining in the first half. Junior attack Bella Feldmann and freshman midfielder Margaret Stephan scored  goals to pull the Phoenix within one point. After another Towson goal, Stephan scored again to make the score 4-5, but the Tigers finished the half with three consecutive goals to take an 8-4 halftime lead.

In a slow start to the second half for the Phoenix, the Tigers scored the seven more consecutive goals to build an 11-point lead. The Phoenix did not crack the scoreboard until nearly the 12  mark, when senior attack Mae McGlynn tallied the team’s first goal in just over 23 minutes of game time. After another Towson goal, senior attack Sara Bouwman scored in the game’s last minute to make the final score 6-16.

The Phoenix were outshot by Towson 27-14 and were dominated by the Tigers on draws 14-9. Elon also turned the ball over 17 times and had 43 total fouls, including 28 in the first half compared to Towson’s total of 15.

Elon’s three leading goal scorers of the season — McGlynn, Bouwman, and Stephan — were held to just three total goals and seven combined shots. Redshirt senior goalie Paulina DiFatta, the reigning CAA defensive player of the week, made 11 saves, but her performance was not enough for Towson’s strong offensive attack.

The Phoenix will now wait to learn their NCAA Tournament fate, as they will require one of 22 available at-large bids to make the field. The NCAA will announce the bracket on May 9.