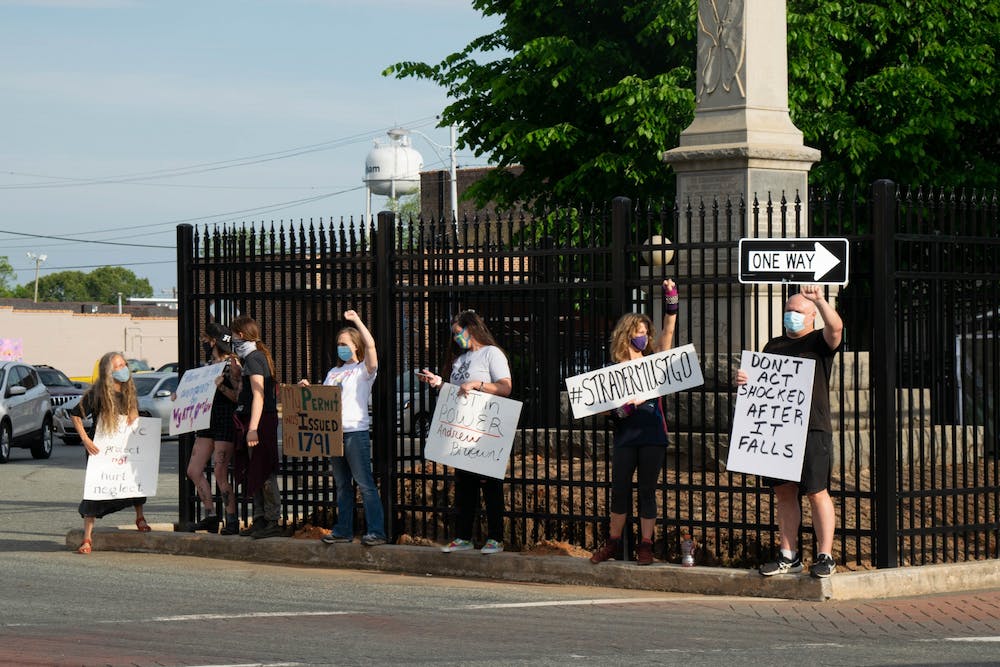 
Occupy Graham demonstrators stand in front of the Confederate monument in downtown Graham at the group's bi-weekly protest on April 28.

Occupy Graham demonstrators gathered at Sequential Park, commonly called Wyatt Outlaw Park, this evening for their bi-weekly demonstration. The demonstration was held to protest the decision by Elizabeth City sheriff’s deputies and a judge not to release the body camera footage from the shooting of Andrew Brown Jr., as well as the arrest of two protesters in Graham yesterday. The protest was followed by a sit-in at the Graham Soda Shop, which is located to the left of the park and the Confederate monument in front of the courthouse.

One demonstrator from Wake County who declined to provide Elon News Network her name but goes by “Red” said she came to protest in Graham for Brown Jr., but also for Avery Harvey and Theresa Draughn, two protesters who were arrested in Graham on April 27. Red said she came to Graham after she heard of the arrest, in case “jail support” was needed.

“The city of Graham decided to enforce an ordinance that they suddenly felt was valid, even though they hadn’t been for a while,” Red said. “They arrested two people and it was against their constitutional rights, and I think it’s a shame.”

According to Harvey, who is the founder of an activist group called People for Change, he was arrested for failing to disperse and violating the city of Graham ordinance regarding protesting, 20-179. The ordinance was changed by Graham City Council in March. It replaces a more restrictive ordinance that was challenged over the summer.

“I was in the police car, I got arrested, unlawfully arrested,” Harvey said. “These unconstitutional laws, orders and stuff, it’s crazy. With that being said, we’re going to reserve our right to be here.”

Harvey said he was held for about 40 minutes. Elon News Network has been unable to obtain documentation of Harvey’s arrest.

Patsy Simpson, Alamance-Burlington School System board member, said she came to the protest because she could not find the ordinance officers were referring to yesterday.

“I have an issue not only with the ordinance and people[‘s], individuals right to speak and to protest, but the fact that they are enforcing it without it being any notice to the public, so I was hoping to get a copy of it so I can read the details of it,” Simpson said. “But I do not believe that we should have any areas that are designated as not to be free speech areas in our town.”

Demonstrators marched around court square and protested for about an hour. While members of the demonstration marched, Steve, a Black man from New York who declined to give Elon News Network his last name, took photos of protest signs on the ground. Steve, 66, said he was a kid when the Black Panther Party was started.

Following the march, some demonstrators went to Graham Soda Shop to stage a sit-in. Once demonstrators left the shop, a Graham police officer asked everyone to show him their IDs. The officers did not enforce the question and demonstrators dispersed around 7 p.m.

Occupy Graham has been demonstrating bi-weekly at Wyatt Outlaw Park since Jan. 6 and will continue to do so, according to organizer Kristopher Loy.

Ben Muse contributed to the reporting of this story.