Baseball season off to 'inconsistent' start

With six conference games already cancelled, Elon baseball is aiming to get back on track as it prepares for a second round of conference play this weekend against William & Mary 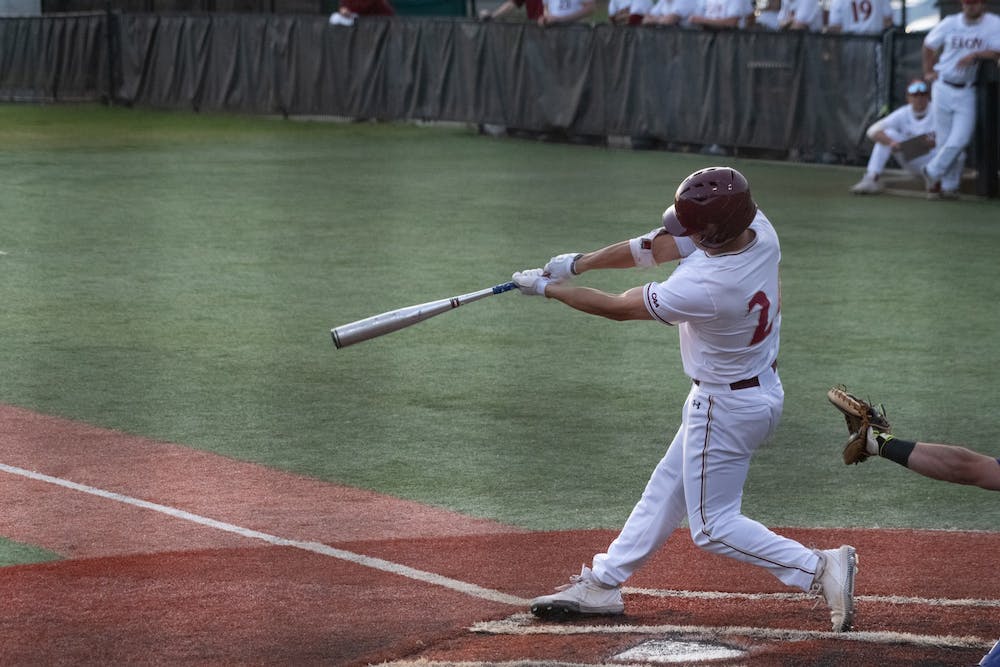 Currently, the team has a 7-13 record overall and is 1-2 in conference play.

The team lost on March 26 to then No. 8 East Carolina 15-0. The Phoenix then returned to play against the Pirates the next day, beating them 2-1— it was Elon’s first win against at top 10 ranked team since 2013.

“When you’re six games down before you even play a conference game, it’s going to be challenging,” Kennedy said.

Its first conference series was this past weekend at University of North Carolina at Wilmington, where they went 1-2 in the series.

Elon baseball has heavily relied on younger players early this season, particularly redshirt sophomore pitcher Brian Edgington and redshirt freshman outfielder Alex Iadisernia. The pair are new to conference play as neither had played a conference game in their careers prior to last weekend.

Edgington began pitching for Elon last year after transferring from Mercer County Community College. Edgington has allowed 12 earned runs in 30 total innings on the season. Also, he was also named the Colonial Athletic Association co-pitcher of the week last week after he stepped in during the final four innings for freshman pitcher Spencer Bauer in the team’s second game against East Carolina.

“I was just trying to follow him, just keeping at that point, keeping the lead and just trying to execute pitch after pitch and just letting my defense work,” Edgington said.

As for Iadisernia, he leads the team in batting average, runs scored and hits. He currently is hitting at a .395 clip, and has seven home runs this season. He still wants his team to improve in various ways, but says that may come with time.

“We gotta get started hitting them better with runners in scoring position and stuff like that, but I think we’ll figure it out as the season goes on,” Iadisernia said.

Kennedy said those inconsistencies are common among the team, as the roster is made up of mainly underclassmen. Only five members out of the 41-man roster are graduating seniors.

“If we can put it all together,we have some talented guys,” he said. “ We’re very young. There’s no question about that, but we have guys who are very capable, it’s just putting it all together.”

Some of the other reasons, according to Kennedy, is they struggle to maintain a lead when they change pitchers and tend to leave players in scoring position for too long without taking risks.

“We’ve had a few good starts, and it’s just a matter of trying to piece those things together and then all offensively,” Kennedy said. “Really our main goal was to be a little more competitive with guys in scoring positions.“

The pandemic is another factor affecting the team’s season since there are a limited number of conference teams. Due to the COVID-19 pandemic, the CAA opted to create divisions this year to reduce travel. This means Elon’s program is pitted against the College of Charleston, UNCW and The College of William & Mary twice throughout the season.

“You have to show up, and you have to be ready to go because you don’t get them back,” he said. “If you dig yourself too much of a hole out of the gate, it could be tough to climb out of.”

However, the coach no longer fears his team catching the coronavirus and being placed in a hold because of contact tracing and positive test results. He has faith that his players are socializing in smaller groups, being vaccinated and taking the necessary precautions to continue their season. Edgington said following the protocols is something he and his teammates have gotten used to.

The team will face off against William & Mary for a doubleheader at home on Saturday, April 10 with the first game at 1 p.m. and the second game set to start at 5 p.m. They will finish the series Sunday, April 11 at 1 p.m.