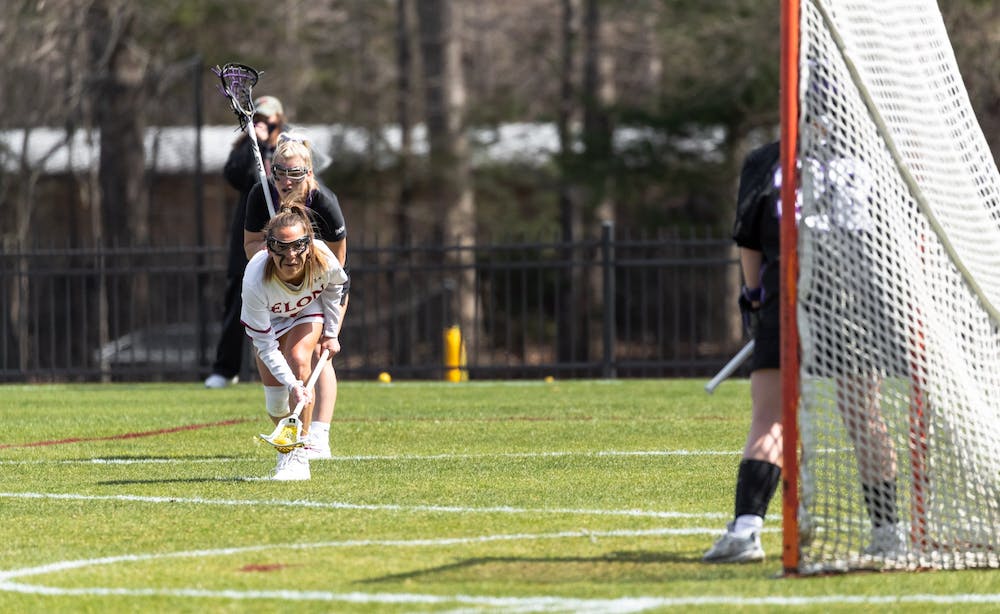 Photo by Lucas Casel | Elon News Network
Mae McGlynn faces off against Meghan Deehan during their game on Saturday at Rudd Field. The Phoenix would go on to beat Furman 13-9.

Elon women’s lacrosse has won five games straight, defeating teams both in and out of their conference such as James Madison University, Furman University and Radford University. Despite their 5-0 record, head coach Josh Hexter said the record does not matter when it comes to preparing to compete.

The seniors are the ones responsible for maintaining a positive environment during practices and game days, according to Hexter. Even though the pandemic has affected team dynamics, he said he is still proud of the way the team continues to work hard every day.

“It's not easy to just lock it down, so to speak, and our girls are doing a really good job of that,” Hexter said. “I hope we can stay focused and continue that.”

Senior attacker Mae McGlynn said that despite COVID-19 related changes to protect the safety of the team this season, she and her teammates continue to work hard and keep their bonds strong on and off the field. She aims to keep her teammates motivated and positive throughout practices and games.

“It's having a great mentality and going into every practice and every game, knowing what we need to get done and given the circumstances, we know that a lot can change. So just taking it day by day and just pushing each other every day,” McGlynn said.

Hexter said the team’s most recent 13-9 win against Furman University was not their best performance. The team ended the first half tied 6-6 but came back to score 7 goals in the second half.

A key component of the team’s success has been connections, Hexter said. Defensively, only 33 of 91 shots on goal have been let in this season. Offense has scored 65 times out of 149 shots attempted.

Hexter owes the team’s success to the trust built between the coaches and the players as a whole. He said offensive coach Beth Roberts has worked with the offense to build upon trust and skills.

“When you have that kind of relationship with your coaching staff, you're more apt to just play a little more free, but with less stress. And then you're going to play better that way,” Hexter said.

The coaching staff is also focusing on continuous improvement to prevent the team getting comfortable with their undefeated start to the season. They are continuing to improve upon their skills, take care of their academics and expand how they can play instead of being one dimensional.

McGlynn said she is continuing to work on shifting to playing behind the net. She said the team’s biggest competition this season is James Madison University, who they beat for the first time in program history on March 7. They will head to James Madison to face the Dukes again on April 25.

“I'm really happy with everyone how we've been playing. I'm so happy. I'm so proud of the freshmen, every class and how they're they've been, especially with COVID,” McGlynn said. “I know that we can get down sometimes, but we always remind each other to like pick each other up.”

The team was scheduled to travel to High Point University on March 27, but after a COVID-19 case in High Point's team, Elon's next game is now March 29 at Longwood University. They will return for a home game on April 11 against Virginia Commonwealth University.