The Phoenix downed the Tribe 73-24 to finish home series. The final home game against Hofstra was canceled. 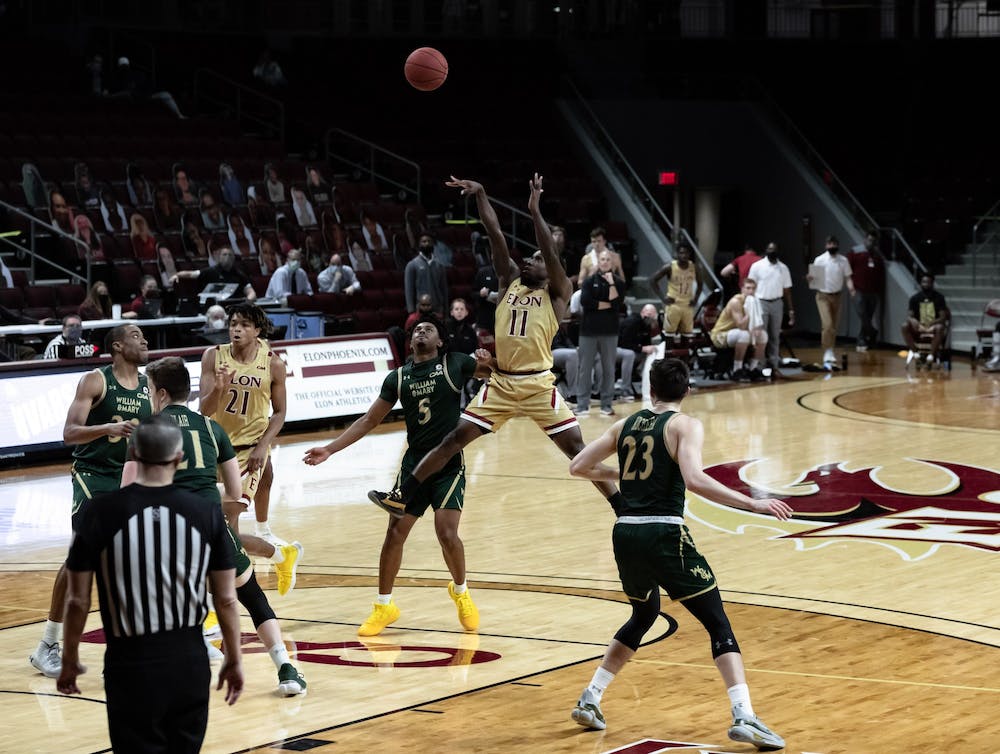 
Graduate transfer guard Ikenna Ndugba led the Phoenix in scoring with 17 points against William & Mary Feb. 22. Ndugba found his rhythm in the last two weeks, scoring 44 points in the past three games leading up to tonight's game.

Elon’s defense clamped down on the Tribe, holding them to a 40.5% shooting percentage while causing 21 turnovers in the process. The Phoenix offense was proficient with its shooting, hitting on 48.3% of its field goals. Sturdy defense mixed with offensive efficiency led to multiple scoring drives all night that kept the Phoenix ahead of the Tribe for the entire game.

Freshman guard Darius Burford had another strong showing after dropping a career high 27 points in the first matchup against William & Mary. The six-foot freshman was fearless, driving to the rim for tough buckets and even attempting an alley-oop at full speed in transition. Burford also showcased his defensive prowess, collecting six defensive rebounds and a team-high four steals. In only his first year Burford’s ability and grit has already been recognized by his teammates and coaches.

“Kris [Wooten] calls him a devious demon and Coach calls [him] BeepBeep because he's so quick,” junior forward Chuck Hannah said. “He's always trying to make a play and we just tell him to stay in attack mode.”

The Phoenix final home and home series against Hofstra has been canceled, bringing the 2020-21 men’s basketball regular season to an abrupt halt. Head Coach Mike Schrage said the team is “open to playing someone this weekend” in order to get more competition before the CAA tournament in Harrisonburg starts March 6.

With the cancellation of the Hofstra home and home series this win against the Tribe may be the last game of the Phoenix regular season. If the team is unable to schedule a game this weekend, the win over William & Mary will be its last before the CAA tournament.

“The good thing is that our last memory is a win, and we’re going to cherish that and practice the right way,” Schrage said.

Graduate transfer guard Ikenna Ndugba had the hot hand for the Phoenix. Ndugba led the Phoenix in scoring with 17 points. Ndugba found his rhythm in the last two weeks, scoring 44 points in the past three games leading up to tonight's game.

The game started as a defensive chess match with both teams forcing their opponent into tough shooting situations. The Phoenix were able to separate themselves on the scoreboard towards the end of the half. The Phoenix went on a 14-3 run capped off a three-pointer by sophomore guard Hunter McIntosh, which forced the Tribe to take a timeout. The Phoenix led 36-22 at halftime.

In the second half the Phoenix came out of the locker room and immediately started hot, going on a 14-6 run. The Phoenix maintained their lead, and more sturdy defense held the Tribe to 32 second half points, lifting them to their fourth straight win.

The Phoenix advanced to 6-11 all time against the Tribe with its two wins this season. Last year the Tribe, led by 2020 CAA Player of the Year Nathan Knight, who handed the Phoenix two regular season losses. The last meeting between the two teams last year came in the CAA Tournament, where the Phoenix stunned the No. 2 ranked Tribe in the quarterfinals.

“We are just focused on getting better every day, and trying to be a little bit better than we were yesterday,” Hannah said.