Elon men’s basketball struggled to maintain a close game towards the end of the 2nd half, resulting in a 70-61 loss 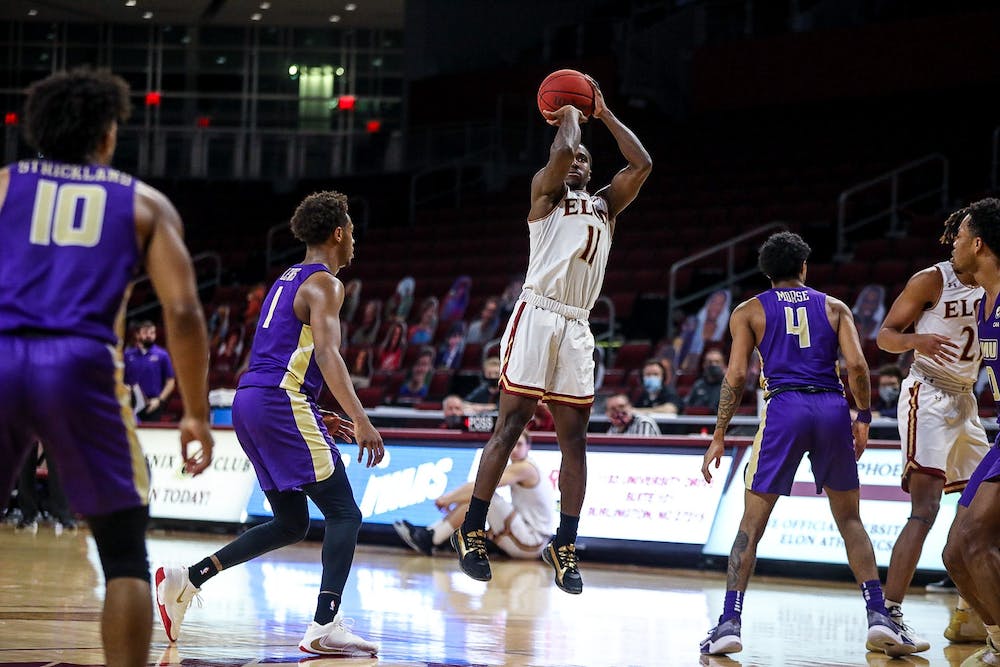 The Phoenix fell to the Dukes 70-61 in the first men's basketball game at Schar Center since December 19, 2020. Photo courtesy of Elon Athletics.

Following two postponed games, the Elon University men’s basketball team took the hardwood against the James Madison University Dukes at Schar Center for the first time since December in a Tuesday-evening Colonial Athletic Association matchup. The Dukes came out victorious 70-61 on the back of senior guard Matt Lewis’ 22 points.

James Madison started out stronger, hitting a three-pointer within the first 15 seconds of the game. The Phoenix were led by senior forward Simon Wright in the first quarter as he chipped in nine points. Elon saw a well-balanced attack bring them a lead at halftime, as six of the nine players who saw action scored. There was a lot of back and forth play throughout the first half, giving Elon a five-point lead at halftime.

Head coach Mike Schrage said that the team’s momentum throughout the first half was strong, but lagged in the 2nd half, giving the Dukes a lead.

“Those middle 20 minutes have been really difficult. I don't know if it's fatigue, what, but they have. It was just exciting to put 20 minutes together. It was a step today because we hadn't done that since we came back from pause especially,” Schrage said.

The Dukes took the lead in the second half, scoring 12 points within the first 4 minutes while 1 point was scored for the Phoenix.

Wright led Phoenix at the final horn with 17 points and five offensive rebounds. Hunter McIntosh followed him with 13 points while also leading the team in floortime. Wright said he owes credit to his coaches.

“The coaches could not be better at injecting confidence in me every day,” Wright said.

The team has not played at home since Dec. 19, due to COVID-19 pauses. Wright said that while it was not ideal to lose the first home game in two months, it provides him with more motivation moving forward. He hopes to implement the same motivation onto his younger teammates and provide them with his outlook as a senior.

“No matter what happens, you wake up the next day and you gotta get right to it,” he said.

Schrage agreed, saying that they have to keep moving forward, despite the challenges that have been presented.

“It's on our guys to compete and play better. And we will, we just got there. Our biggest mission this year is stay healthy and get better,” Schrage said.

The team will play their next game this Saturday at College of Charleston in Charleston, South Carolina at 1 p.m. They will return home on Feb. 18 to face the College of William and Mary.

The Elon men’s basketball team advanced to the Colonial Athletic Association tournament semifinals for the second straight season after beating top seed James Madison University in a 72-71 quarterfinal win. The Phoenix, seeded eight in the conference tournament, now move to a 9-8 record on the season, as James Madison, the one seed, drops to 13-7.

Elon University’s proposed amendment to the 2021 Annual Alamance County Mutual Aid Agreement between local law enforcement groups was rejected by those agencies, leading the university to use “direct communication” regarding aid requests instead. House said the committee decided that communication with law enforcement agencies regarding mutual aid requests is how the university will address issues within the agreement.