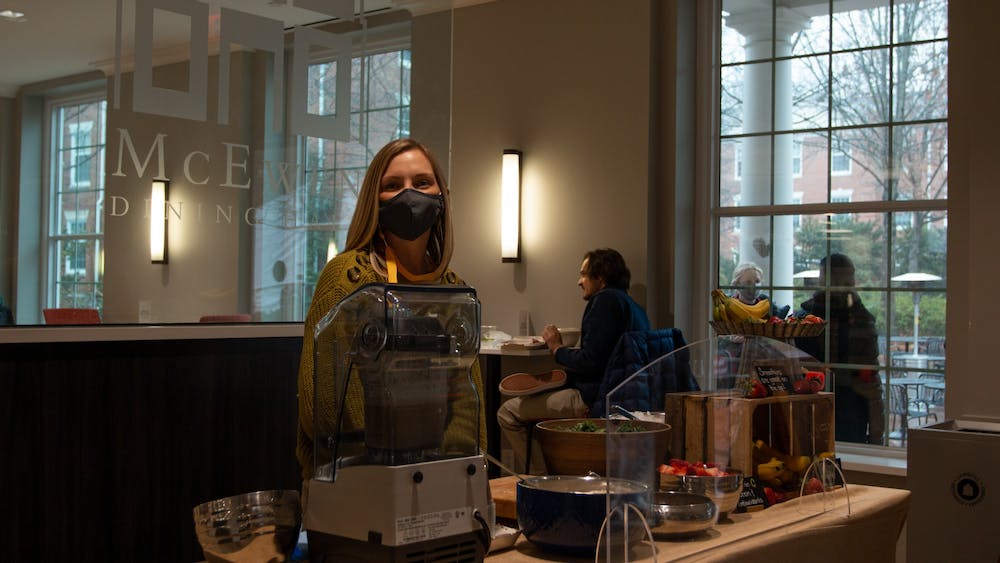 Feb. 22 through 26 is National Eating Disorder Awareness Week, which will coincide with the sixth year of Campus Recreation and Wellness’ Love Your Body Week. Campus Rec is working in partnership with Counseling Services, Elon Dining, the Produce Box and several other sponsors to create a week of events to promote all aspects of loving one’s body mentally, physically and emotionally.

About 95% of eating disorders are diagnosed in people ages 12 to 25, according to research conducted by the Recovery Village. Leslie Williams is a nutritionist who specializes in eating disorders, and has an office just across the train tracks from Elon University’s campus. She said one of the largest trends she sees is students purposely skipping meals.

This is one of the most common warning signs of an eating disorder, according to the National Association of Eating Disorder Awareness. Williams said this has become common in the Generation Z population, which loosely includes people born between 1996 and 2010.

Williams said the common trend she sees is the thought process of knowing one needs food for survival, but choosing not to eat to consider themselves strong. She said this behavior normalizes disordered eating behaviors.

Associate Director of Campus Recreation and Wellness for Student Wellness Charlotte Williams is on the planning committee for Love Your Body Week. She said the mission of LYBW is to provide education on eating disorder awareness, mindful eating, diversity and inclusion through their events.

Leslie Williams said LYBW and Eating Disorder Awareness Week are an opportunity for college students to consider the way comments concerning physical appearance can be interpreted. Making comments about somebody’s weight could trigger past or present struggles with eating or body image, she said. Even particular statements that connect an eating disorder with a certain body type can have adverse effects.

SPARKS Peer Educator, a program for students to advocate holistic wellness, Alex Covello blames social media and television for glorifying eating disorders and representing them with one physical look. People in today’s society make a certain physical assumption when they think of the phrase “eating disorder,” she said.

Covello said the culture centered around eating disorders on campus is misinterpreted and believes that comes in part from being on a predominantly female-identifying campus. 59% of students on campus identify as female, whereas 41% identify as male, according to the Elon University website. The Child Mind Institute reports that eating disorders are more common in females than males due to biology, puberty and cultural factors.

“I feel like a lot of people don’t recognize that it actually is a disorder. It’s not a diet or a way of living or necessarily even really a choice. It is something that’s tied into everything else, mental, physical, et cetera,” Covello said.

Students sometimes also neglect the fact that this is not only an issue in women, Covello said. It can also affect the male population.

“Because we’re such a female-dominated campus, we don’t remember that men can have this too. And it’s very, very real for men. It’s even more severe in men in certain cases,” she said.

For this reason, the Love Your Body Week committee decided to reach greater parts of campus and expand their community outreach to include former MLB player and advocate Mike Marjama, who once struggled with an eating disorder.

Marjama said his overarching goal through his work is to shift the conversation and mindset when discussing topics such as mental health, suicide and eating disorder awareness. He described his eating disorder as a symptom of a deeper issue like post-traumatic stress disorder, for example. However, it is not the cause.

“My mission, more or less, is flipping the script on some things and saying, ‘You know what, it’s not your eating disorder,’” he said. “Let’s stop villainizing the eating disorder. Let’s start looking at, ‘OK, what is it that’s deep down inside of you, that makes you you and makes you very successful?’”

Past traumas, genetics, psychological health and emotions can all be related to eating disorders.

This is something she has noticed on Elon’s campus, along with skipping meals while operating on a busy college student schedule. NEDA reports that 35% of normal dieters progress to unhealthy dieting and 20 to 25% develop a full or partial eating disorder.

2021 is the first year much of the Love Your Body Week programming has shifted to a mainly virtual platform. However, Charlotte Williams said this came with the opportunity to expand their community outreach beyond what they had done in the past.

She hopes the week gives students a better understanding of how to love their bodies through emotional, mental and physical wellness.

“Our hope would be that they leave the week loving their bodies a little bit more or having a better appreciation than they did going into the week. And that, possibly, they will discover something about them that they can carry on into their lifelong health journey, self-care practices and mindfulness practices as it relates to our body and wellness,” she said.

Love Your Body Week will conclude on Friday, Feb. 26, but student resources can still be accessed through Campus Recreation and Wellness.