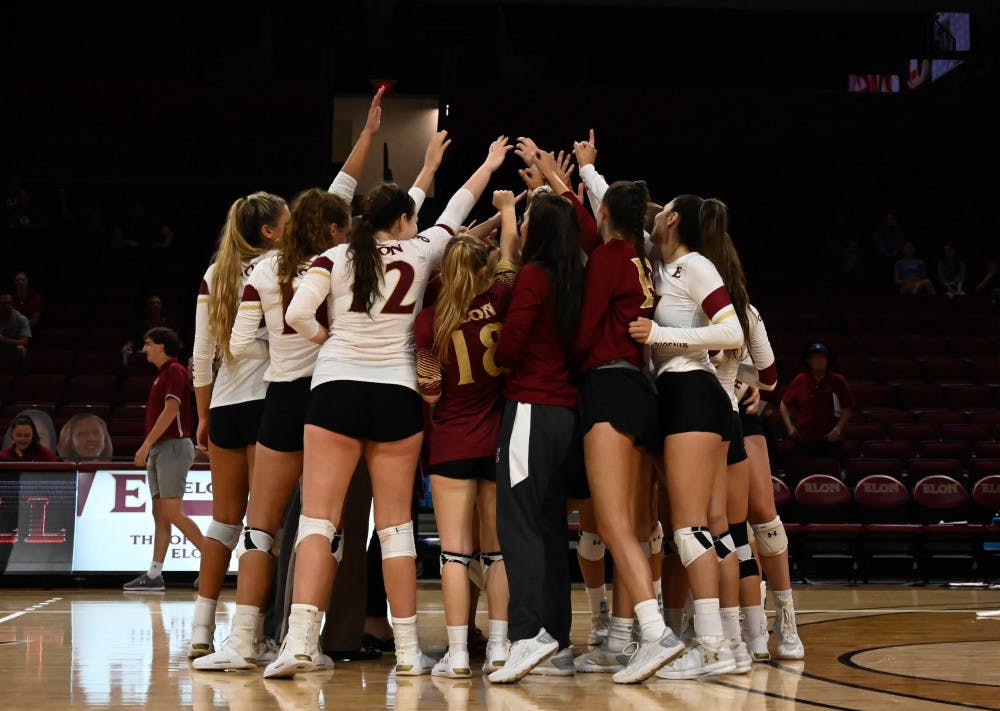 Elon Women's Volleyball celebrates a win after a hard fought 5 sets against Wake Forest on Sept. 15, 2019.

Senior Kodi Garcia wakes up, showers, goes to class, meets with her adviser, heads to the gym for treatment, goes to practice, lifts, showers again and then goes to tutoring. If she has time, she then hangs out with her friends. This is another day not only in the life of a college student but as a senior on the volleyball team.

Garcia has been playing volleyball at Elon University for the past four years. However, her last year is looking a little different.

Because there is no volleyball season this semester, Garcia has more time to focus on her studies. She also has found other hobbies during the time of no practice, including golf and tennis. She said she stepped away from her role as a Division I athlete and took advantage of a less structured daily schedule.

“During that time I was able to be a normal college student, which is totally different,” she said.

"The fact that it's not over yet, we haven't even started our senior season yet, is kind of nice. It's prolonging the inevitable, but it's just more time that we get to spend with our team."

Fellow senior Madison Genaway said the delay in beginning the season has a major benefit: delaying the end. In a normal year, the season would end in late November and Genaway’s time on the team would be coming to an end.

“The fact that it’s not over yet, we haven’t even started our senior season yet, is kind of nice,” Genaway said. “It’s prolonging the inevitable, but it’s just more time that we get to spend with our team.”

Genaway said thinking about the loss of a senior season and senior traditions is difficult for her.

“I have been dreading senior season since freshman year because obviously I never wanted to stop playing or graduate,” Genaway said. “This year I was like, ‘well, you know what, I’ll be graduating with like my five best friends.’ We’ll get through this together. And then not having a season, it’s just hard.”

However, Genaway said she finds comfort in her coaches’ ability to honor her class, even amid the current COVID-19 restrictions.

Garcia said, the fall season cancellation has negatively affected her and prepared her for any new announcement.

She has taken this uncertainty to heart, realizing that she may not get to play with her teammates for one last season in the spring. However, she has accepted that it is her time to move on from being on the volleyball team at Elon.

“I’ve already taken not having a season in the spring pretty hard and not having a full season already pretty hard,” she said. “I’ve been preparing myself for a text any day now saying that we won’t have spring sports.”

Garcia’s largest motivation heading into the spring season is giving it her all for her last ride.

Genaway has a similar rationale, and said her last season is motivation for her to play at the best level she can. Because she is ending her 10-year volleyball career, she wants to bow out on a successful note.

Along with the schedule shift, another major change is the mask requirement during all team practices and lifting sessions. The coaches are responsible for mandating the six feet of distance rule. Genaway said that they are reminded at least 20 times throughout practices to remain distanced.

The mask requirement was not easy at first, but that has changed as time has passed, Genaway said.

The players are also not allowed to physically congratulate each other after plays, something that would be standard in practices and games. If a player breaks this protocol, their coaches will warn them. Players also hold each other accountable. The team is also allowed to step away from practice if they need a second to breathe without a mask on.

Genaway said the mask mandate required more adjustment when they first started to condition while wearing one.

“Now that we’re playing and I’m wearing the mask, I don’t even notice it, especially during play,” she said.

Another change is team bonding. Because of the current situation, the team is limited outside of practice activities. They can not all gather together in one space because it would be above the current limit on gatherings at the university.

The team typically participates in a “big-little” system, where an upperclassmen is matched with a younger player. However, those activities, along with other team gatherings outside of the court can not operate.

“It’s a little bit hard now because since they’re not technically in our close contact circle, we can’t be obviously around them that much. We’re missing out on ‘big-little’ things and just being able to be as a whole team together,” Genaway said.

Their schedule now has returned to almost normal. The team practices every day except Wednesday.

They could not do their standard offseason routine in the spring, but are now practicing as they typically would. They hope to play a full season next semester. Even that is still uncertain.

As seniors, Garcia and Genaway both agree they may not miss the sport of volleyball itself, but they will miss the competition involved with the Division I program and their teammates. After they graduate, they will both have less structure in their daily routine, something that is different from being a Division I athlete.

Genaway said that while her next step is to get a job, she has the freedom to do that wherever and whenever she chooses.

The skills they have acquired, both physical and social, will lead them into their professional careers.

“The relationships and the connections,” Genaway said, “that we’ve made are going to be brought throughout our lifetime.”

The town of Elon is set to hold  a Community Clean Up event on Feb. 27, from 9 a.m. to 11 a.m. around the town. The event comes after  a public comment made by a town resident at the last Board of Aldermen meeting. The resident was concerned about the level of litter in his neighborhood. Members of the Board of Aldermen and Elon University’s Student Government Association are calling on students to attend.

The 2021 Black History Month Dance Concert came with long hours of rehearsal and conversations that left dancers in tears of mixed emotions. The concert features numbers in dance styles like West African dance, a poet laureate of North Carolina and a live band. Unlike in past years where a recital occurred live, the cast and crew filmed the show in November, and the significance of the performance has only increased since.

Advancing diversity, equity and inclusion for faculty and staff