Local businesses prepare for departure of students for Thanksgiving break 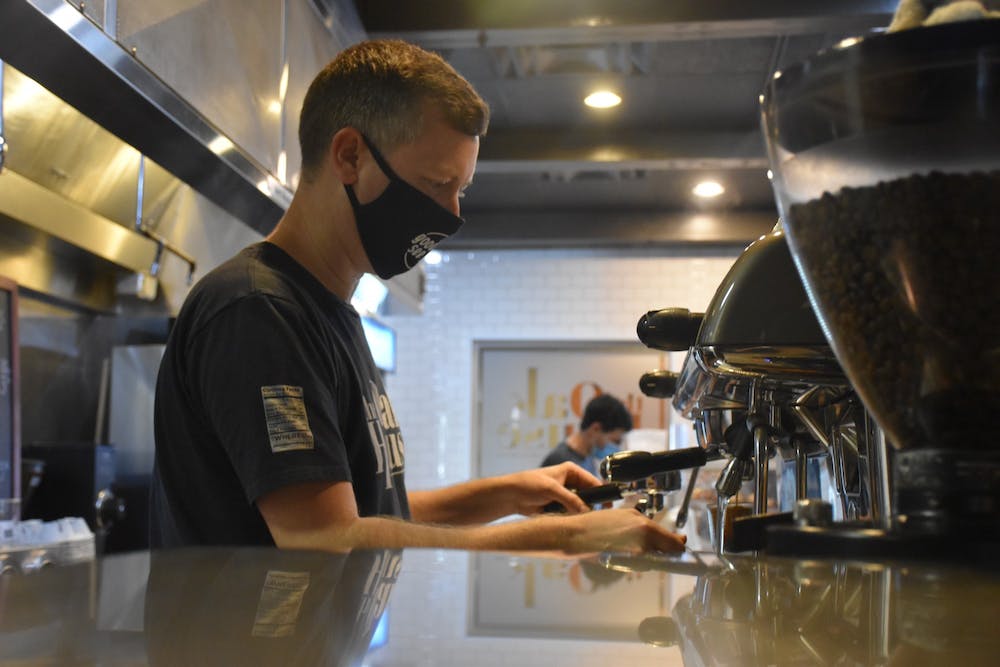 In just a few weeks, North Williamson Avenue will experience a downturn in traffic as students are leaving campus for a winter break longer than usual. Stores such as All That Jas and The Oak House are preparing for this shift in business.

All That Jas owner Michaelle Graybeal said that the past eight months have been hard, but they are hoping for it to get better.

“My dad always would say, ‘when you get to the end of the rope, just tie a knot and hangout,’ so that’s kind of what we are doing,” Graybeal said.

When students left campus in March due to the COVID-19 pandemic, the store closed and kept its doors shut until August when students returned. Behind closed doors they created their ambassadors program which has the goal of spreading awareness of All That Jas across campus. In addition they used the time to prepare for fraternity and sorority recruitment at the Elon location and various partner universities.

“We are here creating and doing orders traditionally, even during the summer. We have normally been open because we do things for other schools like High Point, who has recruitment in the fall and then other stuff all over the country,” Graybeal said.

Over the break, they plan to do the same. The shop is working on several bulk orders for sororities and fraternities and creating new products and designs. As of now, they only plan on closing for two weeks during December holidays.

Although they have continued creating they have experienced a nosedive in sales due to a drop in customers. They are down nearly 50% from last year’s sales.

“We have made up more shirts and gotten more things, but if they don’t walk through the door and come shop, then there’s only so much we can do as far as a small business is concerned,” Graybeal said.

Because of issues like this, Graybeal wants students to know the importance of supporting small businesses during a downswing such as the one her store is going through.

One of the biggest issues the store is currently facing is the limitations it has due to its size. With only six people allowed in at a time because of implemented physical distance, several staffing changes were in order. Michaelle said that they have found it most effective to limit the number of workers rather than customers.

“We have gotten to the point where we are here one at a time so that has helped because one of the biggest things is payroll,” Graybeal said.

Despite their steep decline, Graybeal is confident that sales will bounce back during the winter and spring.

Just one wall over at The Oak House, owner Phil Smith said he would rather be “slow for a long time than shut down and not make a dollar.”

Over break they plan to cut down hours and — similar to All That Jas — take a little bit more time off. During the pandemic, Smith has been trying to find the silver lining to the extended winter break.

“The good part of closing is you get a break and we can do some cleaning and get ready for the winter term,” Smith said.

With students making up nearly 90% of their customers, Smith said The Oak House usually has a plan set before breaks to host events and welcome in more locals. After the campus was nearly vacated in the spring, Smith said that a majority of their profits came from students who had remained at school.

The Oak House has remained open throughout the COVID-19 pandemic. In order to keep the drinks flowing, they prioritized making the space safe and comfortable. The bar has become grab-and-go only, and the coffee shop has limited seating.

After seeing the success of the grab-and-go format for the bar, Smith decided it would be best to keep this structure for the fall.

“We could have had a seating arrangement that could have worked, but we were like, ‘why would someone want to sit on one side of the bar here and another over there?’” Smith said.

The bar staying closed has also helped lessen the congestion that often occurs at the front door by having arrows on the floor directing customers in and out without too much interaction.

“We try really hard to make it flow because especially in a pandemic, waiting in line is a little bit more of an issue and we have probably lost business because people see the line and don’t want to have to wait,” Smith said.

For now, Smith hopes that students and locals will realize the impact that supporting small local businesses has.

“When people spend money at one place,” Smith said, “it helps us all out.”