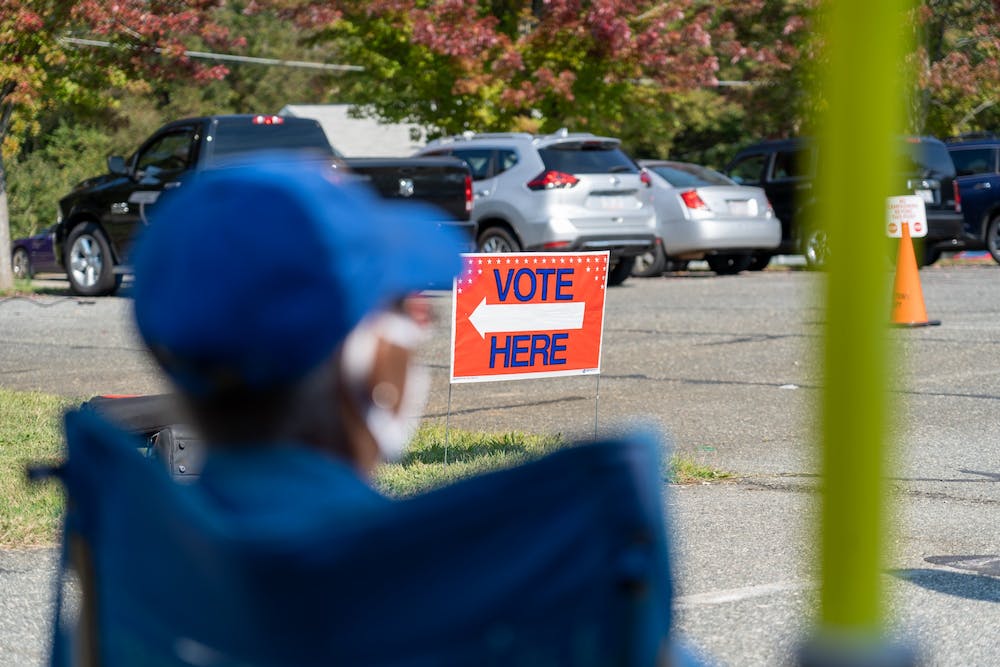 
Signs leading into the early voting polls at the Elmira Community Center in Burlington, North Carolina on Saturday Oct. 17, 2020.

Across Elon University, signs of the upcoming presidential election are everywhere — literally. Instructions on how to request an absentee ballot can be found in most academic buildings, and students receive regular emails from administrators encouraging them to vote.

This will be the first election many college students will cast a ballot in, and it’s widely considered a monumental election for other reasons as well. As tensions across the country remain high from the COVID-19 pandemic, other concerns regarding Black Lives Matter protests and health care affordability during the pandemic are also defining issues voters currently face.

According to a study from Pew Research Center, health care is currently the second largest issue behind the economy that voters take into consideration when casting their ballot. While racial and ethnic injustice falls 8th on that list out of 12, people of color — who make up one-third of the electorate — are expected to be motivated by that factor more than anything else this year, according to a poll by the Advancement Project National Office.

Voter turnout among college-aged individuals has become a focus in recent years after studies began to show it lagging behind that of older voter groups. According to the United States Election Project, voter turnout among 18 to 29-year-olds for the past 10 years has consistently been at least 10% lower than that of 30 to 44-year-olds and more so compared to older demographics.

Daniel Dorociak, president of College Republicans at Elon, said members of his club are focusing on the issues that they believe are directly going to affect them. The priorities of college students are often the issues that they’ll most heavily experience within their lifetime, Dorociak said.

"I think a lot of people also are very pro-Second Amendment in our club, myself included. And so I think that is kind of a thing that they want to really protect and advocate for,” Dorociak said. “And then public health … I think the whole pandemic really is what is getting people involved in that.”

Elon junior Kara Chalifoux — who works on former Vice President Joe Biden’s campaign remotely — noted a shift in the issues put at the forefront of people’s concerns stems from the prominence of social media and immediate access to information. Not only does social media provide the ability to now access information easily, but video and photo capabilities also allow audiences to put themselves in unique perspectives any time they look at new sources.

“I think that we’ve seen, especially with quarantine happening, a lot of social media activism. I think Black Lives Matter is going to be a huge one,” Chalifoux said. “I think climate change already has been and is still a big issue for us. People are reaching out and posting, and I think that these are things that actually impact us. Like climate change is going to impact our lives the most.”

The issues students and young people find important can also be seen in the advocacy and actions occurring on and around Elon’s campus. On Oct. 2, students, faculty and staff participated in the “Elon Against Hate: Walking Protest,” in which the Black Lives Matter movement and anti-racism and anti-hate messages were spread throughout campus in a walking protest.

Chalifoux said that as someone working in a campaign, she understands the significance of voting, especially at this time.

“A lot of people view this election as the election of our lifetime. And I’ve heard that time and time again from professors, from people I talked to, voters and also family,” Chalifoux said. “I think that this election is different in the sense that we’re at this crossroads, and we’re either going to completely go one way or we’re going to go another way. And I think that’s really going to set up the road for modern politics in America.”

Chalifoux said the crossroads stems from what she perceives is a difference in the issues Democrats and Republicans view as important, which can be seen in proposed Congressional legislation and the ways in which people involve themselves in party politics.

"A lot of people view this election as the election of our lifetime. And I've heard that time and time again from professors, from people I talked to, voters and also family.I think that this election is different in the sense that we're at this crossroads, and we're either going to completely go one way or we're going to go another way. And I think that's really going to set up the road for modern politics in America."

Demonstrations are just one of the ways that Elon students have shown their advocacy for the issues they find pressing in the upcoming election. Elon Sustainability is holding their Campus Sustainability Week from Oct. 19 to 23 in which they will not only try to educate students about sustainability and environmental change but help enact it as well.

Dorociak has also encouraged members of his club to speak out about the issues they find important. He said many of his club members and himself have partnered with the National Rifle Association by connecting with their club’s representative and are phone banking and sending out text messages for North Carolina Republicans, specifically U.S. Sen. Thom Tillis and state Senate candidate Amy Galey.

Dorociak also said college students need to learn about political issues closer to home instead of just those of national elections.

"I would say that students need to really learn more about their local issues and their local candidates and what's going on in their local small towns.Because in reality, that's actually a lot more important than the national election because what happens in your small town or wherever you live directly impacts your future."

“I would say that students need to really learn more about their local issues and their local candidates and what’s going on in their local small towns,” Dorociak said. “Because in reality, that’s actually a lot more important than the national election because what happens in your small town or wherever you live directly impacts your future.”

Chalifoux agreed and said many Elon students have seen firsthand the potential effects of the election and are pushing their peers to recognize the issues they prioritize and use their vote to act on them.

“I think that it hits home with the Trump parade and convoy through Elon. I think people seeing that has changed the tone on campus in the sense where people feel very personally attached to it,” Chalifoux said. “And I think Elon students are lucky in the sense that a lot of us are really privileged. And so sometimes that can lead to a little bit of ignorance, like the power of voting and why you should vote.”