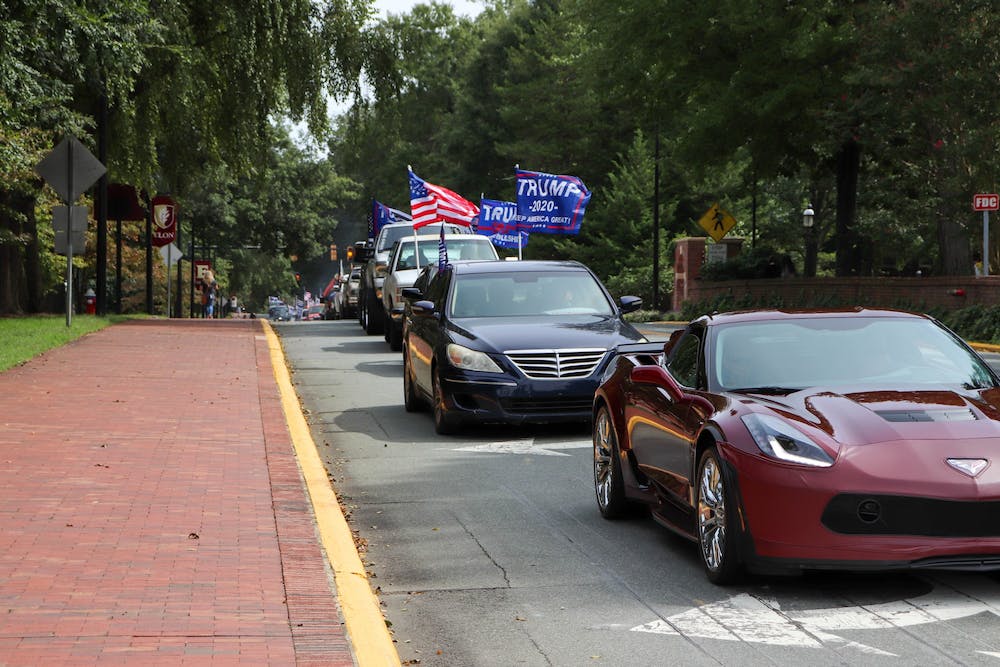 
Cars with flags in support of President Donald Trump drove down East Haggard Avenue, on Sept. 19.

Elon University has submitted a new proposal to the town of Elon to close East Haggard Avenue. The revised proposal cites student security as the reason for closing the road after a convoy supporting the reelection bid of President Donald Trump drove through campus in September.

In the document, the university requests East Haggard Avenue be closed from Williamson Street to North O’Kelly Avenue at least the three times this semester.

During election week, the university proposed the road be closed starting at 9 p.m. on Election Day through through 11:59 p.m. Wednesday Nov. 4. The road would also be closed Nov. 6 at 5 p.m., through Sunday, Nov. 8 at 5 p.m.

This comes after the university’s original proposal to close the road was denied by the Board of Aldermen. That proposal cited creating a large outdoor gathering space for students as the reason for closing the road, but Elon University President Connie Book expressed security concerns when she spoke to the board at their meeting.

That proposal asked the town to close the road every weekend for the remainder of the fall semester.

Elon Town Manager Richard Roedner said he hopes the town can approve the proposal or portions of it by the end of this week. However, he said he doesn't think permanently closing the road is the best solution.

“I think we're dealing with larger societal issues where that kind of behavior is deemed acceptable by people,” Roedner said. “Closing it creates, as I said earlier, a string of impacts from restaurants downtown, retail downtown, traffic that is getting from one side of town to the other.”

According to Roedner, the opinions of the board have not changed but, when it comes to the long-term closure of Haggard, they are open to proposals that temporarily closes the road. Other options the board would consider include closing a lane, implementing one-way streets, or other modifications that make a convoy activity less desirable in the area.