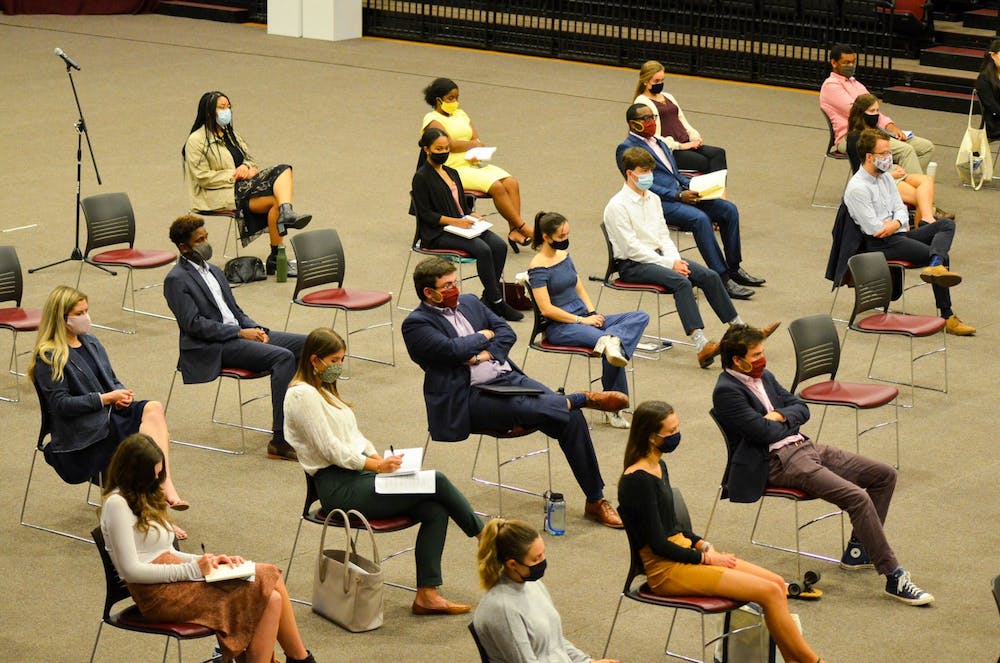 Representatives were split up into three small groups to discuss ideas and brainstorm, engaging in conversations as opposed to passing legislation.

Executive Vice President Jonathan Stettler pushed members of the task force to use their meetings to enact change and come up with more ways to improve the Elon community.

“I'm going to charge every single one of you to take an initiative,” Stettler said. “We can actually have action that comes out of these conversations.”

Delegates were concerned that students' engagement with the town of Elon community would be affected by some Elon administration and SGA member’s support for closing off certain parts of campus and route town traffic around the school. Some members of the Board of Aldermen said they were worried about how the road closure would impact local businesses if the university were to bring vendors on the closed road like the original proposal suggested.

After a caravan of vehicles in support of President Donald Trump drove through campus on Sept. 18, the university along with support from many students submitted a proposal to the town to close East Haggard Ave. The original proposal was denied and a new proposal hasn’t been approved by the town of Elon.

Some members of SGA also brought up the idea of inviting local businesses on campus or hosting events for the town to get to know more members of the community and give back.

“[The town] puts on some amazing events when it's non-coronavirus pandemic time”, Malia Takei competition and government senator said. “I think we should publicize more to the students, just so that we can get more engagement and interactions between the town and the university students in order to build stronger relationships.”

Members then detailed developing a system where students could report interactions with the town of Elon police to increase trust between the student body and the police. Through the system, students would report their concerns anonymously to an SGA representative or through a link attached to Crime Alert emails students receive.