The act, written after the death of Marcus Smith, suggests changes to emergency dispatch 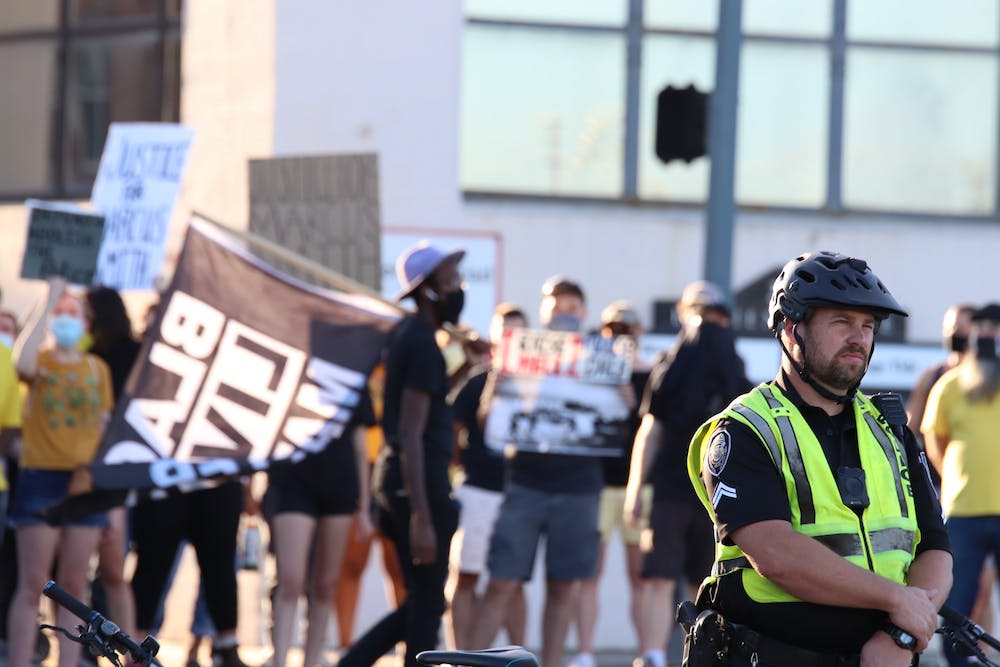 
Protesters chant at police officers halting traffic for the March for Marcus in Greensboro, North Carolina on September 5.

New model legislation written by two Elon professors offers a proposal to reshape the way police officers respond to emergencies regarding behavioral health. The model outlines a way to reallocate police funding in situations involving people with behavioral health issues where 911 is called.

The potential legislation was made for local or state governments and was written following the 2018 death of Marcus Smith, who was recently honored in Greensboro. Smith died during an emergency response when he was hog-tied by police and eventually went into cardiopulmonary arrest. His death was ruled a homicide by the state medical examiner.

The news of Smith's death was difficult for Carroll, she said.

"These events are always so, so hard to hear about. It weighs heavily on me and my mental health and my emotional health," Carroll said, "and yet I am so privileged and share so few of the specific challenges that Marcus Smith as an individual faced."

The BHRT Act acknowledges the need for specialized professionals in these emergency responses when police might not have the best training for the situation, Carroll said.

"We want to avoid incredibly valuable and incredibly vulnerable people in our community paying the price for our overextension of law enforcement and asking them to serve a role that they were not ever designed to serve," Carroll said.

In order to avoid this "overextension," a crisis response team consisting of medically trained personnel, crisis de-escalation specialists and "behavioral health consumers" with lived experience in the behavioral health system would be dispatched for certain 911 calls, according to El-Sabawi. She said this solution was based on the CAHOOTS model, or Crisis Assistance Helping Out on the Streets, a non-profit organization contracted by local law enforcement in Eugene, Oregon.

El-Sabawi and Carroll are working to gain public support for the BHRT act in order to maintain its integrity if it gets adopted by policymakers, El-Sabawi said.

"If policymakers do dilute it, then there is a record showing that that was not what was proposed," El-Sabawi said. "And it's a very public record."

The BHRT act has been endorsed by the North Carolina Survivors Union and the Homeless Union of Greensboro, and El-Sabawi said individuals can sign their support for the act so that a dashboard of support by geographic area can be created.

Though El-Sabawi said the act is intended to be implemented as-is, some areas of flexibility include whether it is implemented at the state or local level, and where funding for the crisis response teams might come from.

Carroll also said the act was adaptable, calling it "the Mad Libs of local laws."

"It is presented to you in its final form as a work in progress," Carroll said. "If you wanted to pass it to your city hall right now, you would need to plug in a few pieces of information and it could be work, but it's also extremely flexible."

Carroll acknowledged that the legislation might not be applicable to every community, but said

the act can "support ongoing conversations" about changes to community services.

"I hope that it inspires richer, deeper and more effective imaginations about what first response could be," Carroll said.