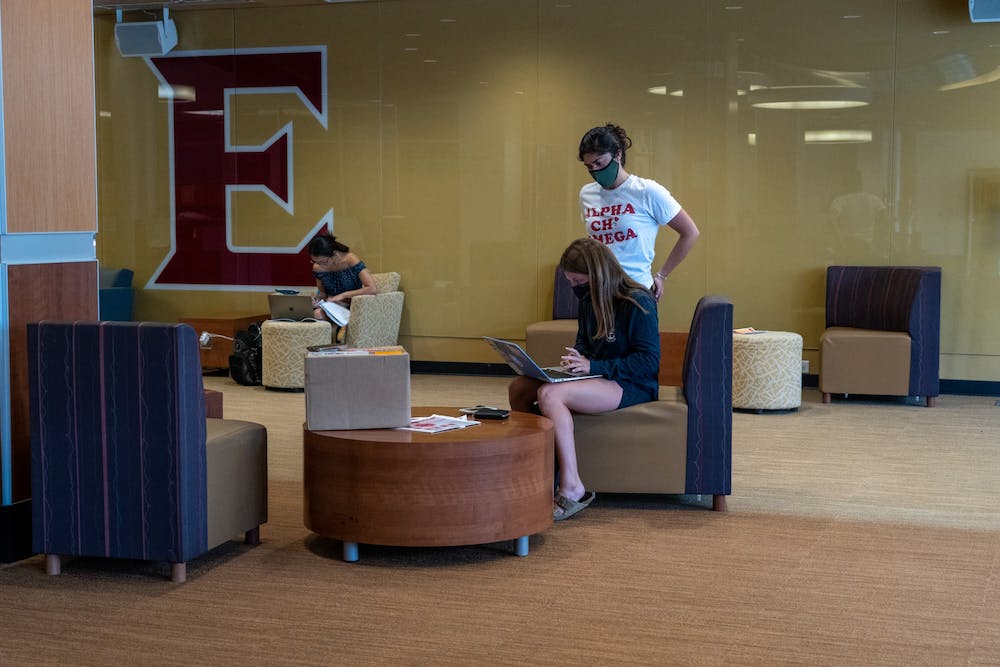 A key component of every introduction to sociology class is the “looking glass self,” a concept created by American sociologist Charles Horton Cooley. The looking glass self describes how people develop their characters from interactions with others. But due to COVID-19 physical distancing regulations, interactions with others have changed, leaving some to wonder what the long-term impact on mental health and interpersonal relations will be.

Elon University professor of sociology Thomas Arcaro said that the lack of social interaction may have an effect on people’s sense of self. Arcaro has been teaching sociology at Elon for 35 years, and has developed a deeper understanding of person-to-person interactions through his studies. Arcaro said he connects the looking glass self to a mirror.

“Everyone around us is a mirror — is a looking glass — and we have our sense of self affirmed and even modified by the feedback we get from others, ” Arcaro said.

Arcaro said that people may not notice a difference in themselves overnight; it is instead a gradual process. He refers to it as “death by one thousand cuts.” Arcaro said that the looking glass theory becomes flawed in times when people cannot interact as much as they are used to.

"It wasn't that I missed social interaction, it was the fact that if I wanted to hang out with friends and meet new people, I couldn't."

“Spending a week in isolation, not being able to physically touch your friends or only being with family; each of those moments alone are not traumatizing, but over time we feel exhausted, anxious, stressed, ”Arcaro said.

Freshman Catherine Valente was in isolation for her first three days of college after showing symptoms of COVID-19 upon her arrival to campus.

“It wasn’t that I missed social interaction, it was the fact that if I wanted to hang out with friends and meet new people, I couldn’t,” Valente said.

For some people, Arcaro said that a lack of social interaction may not have a lasting impact, but for others, it can change their sense of self and future interactions. These two different types of people are often described as “inner-directed” and “other-directed.”

“Inner-directed people don’t need validation from the outside world, whereas other-directed need that input from others,” Arcaro said.

Although Valente considers herself inner-directed, she said it was still tough not being able to be with people for a few days. As if being in isolation was not difficult enough, Valente said it has also been harder to get to know people with all of the physical distancing restrictions.

“It is very hard to meet people or even build a connection with the face masks on and limited social events,” Valente said.

Arcaro said the feeling of disconnect many people are experiencing can lead people to have a sense of malaise, or general discomfort.

With apps like Facetime, Zoom and Skype, people are still able to connect with people on a much smaller scale. Arcaro said that this type of interaction can help ease social anxiety, but will not fill the void.

“They are just a picture on the screen, it is so much different both physically and mentally when you are directly interacting with someone,” Arcaro says.

While Arcaro said he could not speak to the impact the pandemic has had on mental health as a whole, a recent study done by Dartmouth suggests that the impact may be widespread in the future.

Despite many ways to connect virtually, the report suggests that mental health is still affected by the lack of in-person interactions. This study found that students were more anxious and depressed at the time when many were sent home and switched online last spring.

Arcaro said he believes that within the next few years there will be an abundance of scholarly articles that analyze how the changes in communication during the pandemic have affected people.