After a 2018 Working Group Report, Elon University has begun to increase inclusivity for Latinx and Hispanic students 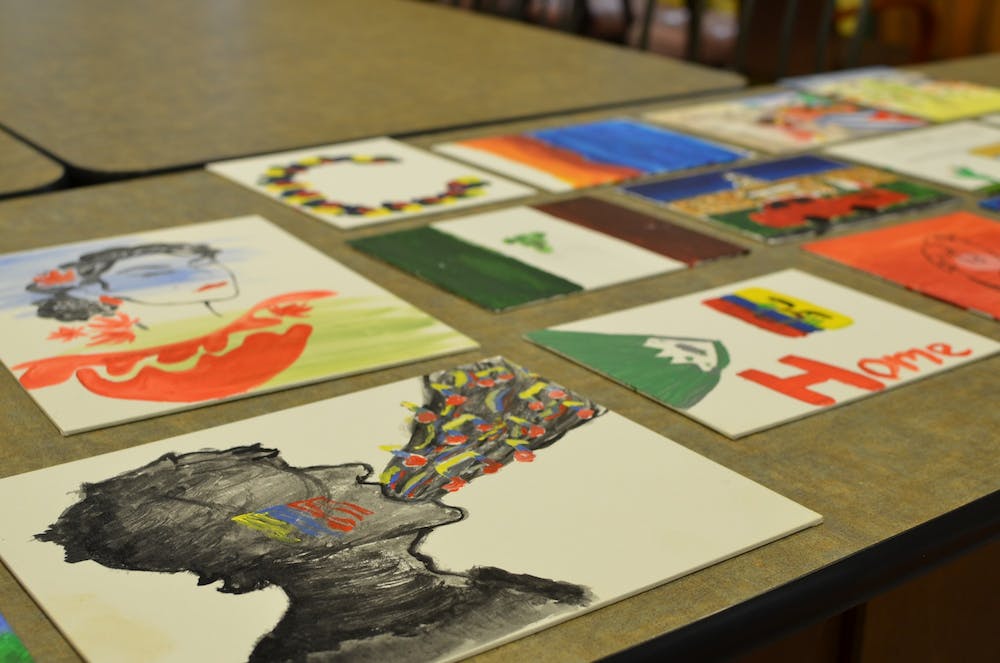 These paintings came from the “Paint mi Latinidad” in which students painted their Latinx and Hispanic identity.

El Centro — the center for Elon University’s Latinx and Hispanic students — was not a place Mackenzie Martinez thought she needed. Coming into college, Martinez was insecure about her Mexican-American identity, having grown up in a Virginia community with very few Hispanic people and not being a native Spanish speaker.

“I was kind of like, ‘I don’t need that,’ because there’s also the stereotype the students of color only hang out with other students of color,” Martinez said. “I was like, no, I want to be part of the broader Elon community.”

But Martinez felt like something was missing, so she began getting involved with El Centro during the end of her sophomore year. Martinez, now a senior, said joining El Centro has helped her become more comfortable with her identity.

“Everyone’s at a different place with their own identity and everyone’s identity manifests in different ways,” Martinez said. “There’s no right way to be a Latina in the U.S.”

El Centro provided Martinez with a sense of community with other Hispanic students where she was able to learn to be “very open and proud” about her identity, practice her Spanish and eventually get a job as a student coordinator.

While El Centro has always been a space that championed Latinx and Hispanic culture education, after a 2018 Latinx/Hispanic Working Group report recommendation, the center decided to shift their focus. They began working to create a resource-focused center for students who identify as Latinx or Hispanic.

There were 46 other recommendations that came from the 2018 Working Group Report, which was written by a group of Elon faculty, staff and students with additional testimonials. The major themes include admissions and recruitment, student aid, success while at Elon, communication and messaging and Latinx and Hispanic faculty and staff.

The report’s recommendations are being overseen by an implementation team of faculty and staff in conjunction with several university departments, including admissions and human resources. Some of the implementation team members were also involved in writing the report, like Sylvia Muñoz — the associate director of the Center for Race, Ethnicity and Diversity Education and director of El Centro.

“This working group report isn’t here because one day, senior administration woke up and said, ‘let’s talk about this.’ We did it because the students push us all the time,” Muñoz said. “When they think about programs or pushing the university for something, they’re also thinking of those other communities that might be smaller in number right now, because whatever change we can make is going to benefit them, too.”

Having students at the heart of the report did not make the writing process any easier. Muñoz said it was painful to listen to Latinx and Hispanic students recount incidents of bias and discrimination they encountered both in and out of the classroom.

“They’re resilient, and they have been succeeding even before we started doing this,” Muñoz said. “There was a realization that these students have been doing so amazingly well even within these constraints, but imagine what they could do if none of this happened.”

Senior Ana Eguiguren was one of the students who helped with the report. She said she has been the target of several racist remarks during her time at Elon.

One encounter that sticks with Eguiguren was being told by a white man as she was walking home to stop speaking Spanish because “we are in America.”

“Having that fear of not replying because this person could be actually crazy and do something, it was something; like, it shook me,” Eguiguren said. “You can’t even stand up for yourself.”

Martinez said she has also been in a classroom setting where other students have commented, “Oh, you’re fluent in Spanish. Why are you even in this class?”

According to the survey taken for the report in 2018, 60% of the Latinx and Hispanic students at Elon have had disparaging comments made to them, while only approximately 14% of white students have had a similar experience.

Eguiguren said that during her freshman year, she struggled with balancing the different roles El Centro played in the Elon community, and she found herself being “tokenized” by students trying to get interviews for their projects.

“They would interview me for half an hour and never talk to me again,” Eguiguren said.

After returning from her junior year abroad, El Centro had changed its purpose.

“I came back to this place where we’re not here to serve, like, other people. We’re here to serve ourselves in our community,” Eguiguren said.

The implementation team’s current focus is to make sure Latinx and Hispanic students have what they need to succeed on campus, including a renovated community space. One of the Working Group Report’s recommendations outlines a plan to convert El Centro into a Latinx Center.

“I think there’s a lot of promise in transforming El Centro into a Latinx Center, not only because of all the possibilities that that opens for students, but also for faculty and staff,” Bravo said. “We are also very few … think of a place where we can interact better, support each other better, support the students much better.”

Bravo said two new Latinx professors were also hired last year, as well as a counselor who was brought on to engage with minoritized students on campus.

“We are helping Elon be more reflective of the society where we live,” Bravo said. “If you think of the United States, it’s a very diverse country … and so what’s happening out there, it’s important to reflect that also in the university.”

Some of the Working Group Report’s recommendations have been put on hold due to the coronavirus pandemic. According to Joan Ruelle, dean of the Carol Grotnes Belk Library and co-chair of the implementation committee, the implementation team has had to narrow their focus to one or two initiatives.

“This is a service-light semester, allowing the faculty to really focus on pivoting their instruction to hybrid and remote,” Ruelle said. “Everyone’s not only dealing with the usual competing priorities, but with some very challenging and specific competing priorities during this time of COVID.”

Even with fewer resources to work with, Bravo said the university has still found ways to proceed with their recruitment efforts. On Oct. 1, Elon Admissions will host ¡Viva Elon!, a virtual event for prospective Latinx and Hispanic students and their families, which is focused on academic success, the community and their future at Elon.

“I’ve been thinking about how so many members of the Latinx community have been affected even more than other members just because the rate is higher for this community,” Muñoz said. “Yes, COVID has prevented us from remodeling El Centro, but I think that right now, that’s not really important compared to how we make sure our students have every single thing they need to succeed and to continue their education.”

Muñoz and Ruelle hope that the report’s recommendation will benefit every student at Elon, not just a particular group.

“I hope that someday, any group that’s convened to do work on minoritized identities can focus on raising up the riches of diversity and what that does for the entire university, rather than what we’re currently doing, which is trying to remove or lower barriers,” Ruelle said.