With the Hispanic population making up 59% of coronavirus cases, but only 13% of the population a Burlington nonprofit helps the community 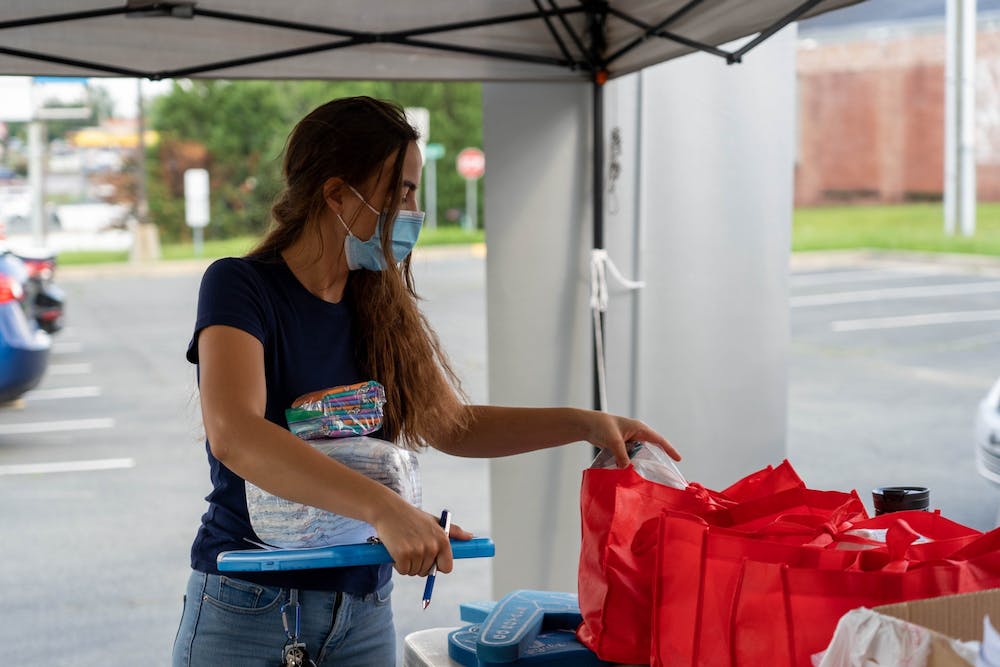 
Maria Hernandez is a staff member at CityGate Dream Center in East Burlington. Hernandez is organizing the diaper distribution the center does every Thursday.

In a renovated warehouse just off North Church Street in Burlington is CityGate Dream Center. The Dream Center — which is a nonprofit and community center— is usually filled with students after school, English classes taught by Alamance Community College or diabetes prevention classes led by Cone Health, but the center has been missing its normal activity.

The coronavirus pandemic has left the Dream Center empty except for a group of volunteers. Even with most of the activity in the center halted, Dream Center director Lisa Edwards felt the need to continue serving the East Burlington community.

“Instead of working on programming and having a building full of students or kids, or even the classes, we're more trying to find ways to be able to provide things in a safe environment,” Edwards said.

According to Edwards, the majority of the people the center serves are Latino, a group that has been hit hard by the pandemic in Alamance County.

According to the Alamance County Health Department, this disparity is higher than expected. In a statement to Elon News Network, Arlinda Ellison, public information officer of the health department, attributed multigenerational households and the workplace as factors to these case numbers.

“Unfortunately in infectious disease situations, these typically protective practices like multigenerational homes are often associated with easier spread of virus among households, family members and social circles. These also can be attributed to worksites,” Ellison wrote.

According to census data, the average person per household in Alamance County between 2014 and 2018 was 2.43.

“I now know people that have been sick or lost a loved one in the area; it's not such a distant thing,” Edwards said. “Most of our families, they have not been able to work from home. They've had to continue to go and to be in close quarters and doing all the things that they normally do.”

According to Ellison, there are 12 case investigators at the health department and there are “2 interpreters on staff, as well [as] bilingual staff members that assist when needed.”

According to the 2018 Alamance County Community Health Assessment, which is conducted every four years, racial and ethnic healthy inequities exist due to social conditions such as housing, education and nutrition.

Latino students in the Alamance-Burlington School System have the lowest graduation rate, and their median household income is roughly $30,000.

In focus groups conducted for the health assessment — that included Latino individuals — an analysis revealed that residents of the county were concerned with included: lack of trust in the healthcare system, having to go above and beyond to access healthcare and job stability.

The pandemic has exposed the community’s basic needs of everyday things like food and diapers, needs that the Dream Center is trying to meet.

“The needs have always been there,” Maria Hernandez, a staff member at the center, said. “They’ve come to light in the pandemic.”

At the Dream Center, staff and volunteers are working to bridge the disparities the pandemic has enhanced.

While the building is empty, the parking lot is full at the Dream Center. Every Thursday from 2 to 6 p.m. the center does a drive-thru distribution of diapers and — depending upon supply — menstrual products and masks.

For 13 weeks this summer, the center paid for local restaurants to hand out meals for families, to not only help those struggling to access food, but to help businesses suffering due to the pandemic. The center gave out roughly 1,800 meals a week.

The Dream Center has been serving people beyond providing food and toiletries; they’re also providing financial assistance. The center was awarded a $13,000 grant from the city of Burlington, which they’re using to distribute funds to those who are in need. The center has set up an application process to receive a check totaling the amount of money a family needs.

Edwards said she saw a financial need due to the pandemic. According to Edwards, many families who frequent the center have been laid off and weren’t eligible for stimulus money from the CARES Act, so the center is trying to help people with bills and other expenses.

According to a study from the Tax Policy Center on adults aged 18-64 who themselves or a family member received economic impact payments — or stimulus checks — the Hispanic population had the lowest percentage of reported checks.

Appointed by Gov. Roy Cooper, Garcia Rico is working to bridge health disparities in communities of color like the Latino community as a member of the Social, Economic, Environmental, and Health Equity Task Force.

According to the first meeting of the task force, their objective is to generate actions that address access to healthcare in “underserved communities.” Cooper established the task force to mitigate already existing inequities that the pandemic has exacerbated.

“It has affected and does impact everyone and all communities but we can see the disproportionate impact of COVID-19,” Machelle Sanders secretary of the NC Department of Administration and chair of the task force said in the meeting. “This should be no surprise to anyone if you’ve been a part of this nation and understand the history of our nation and understand the inequities that we face not even with COVID-19 but that we face as a person of color.”

The Spanish translation of this story is courtesy of Brian Segovia.