The test, which has two variations, costs $129 without insurance and has raised concern along with the university’s relationship with LabCorp 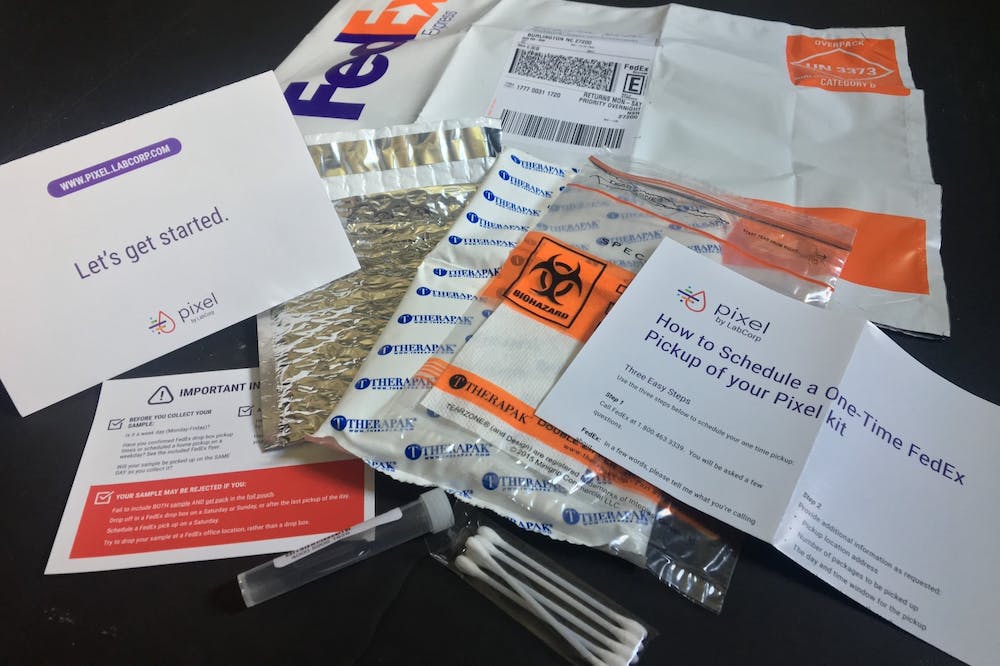 Photo by Emery Eisner | Elon News Network
The contents of a COVID-19 test kit obtained through LabCorp. Elon students, faculty and staff must take a COVID-19 test before returning to campus.

Elon University's required COVID-19 testing as laid out by the Ready & Resilient plan is now in full swing. Elon is requiring that all students, faculty and staff returning to campus in the fall get tested, encouraging students to use Pixel by Laboratory Corporation, an online service that allows individuals to test themselves at home.

The test is a polymerase chain reaction, or PCR test, which allows testing of individuals even without symptoms. LabCorp's Pixel test is a non-invasive nasal swab test sent directly to patients who then ship their sample directly to the laboratory via FedEx.

LabCorp is sending two variations of their COVID-19 Test Home Collection Kit. The older test includes five cotton swabs, a gel pack and an insulated pouch. The newer test is similar, but only has a single foam swab without the gel pack or pouch.

The changes reflect an update to the Food and Drug Administration’s Emergency Use Authorization requested from LabCorp.

According to a July 1 letter addressed to Brian Krueger, associate vice president of research and development at LabCorp, from Uwe Scherf,  director of the division of microbiology devices at the FDA, the FDA approved several updates including using a foam swab in the kits and change of the kit’s instructions.

LabCorp found the gel packs to be unnecessary after the company did a small study that found there was no difference in test results whether the collection was shipped with or without the pack, according to the emergency use authorization summary dated July 24.

“These changes do not affect test performance or accuracy; however, they simplify the collection process and the preparation of the kits for testing at the lab, and also create less waste,” a LabCorp spokesman said in a statement to Elon News Network. “We will be accepting both formats of the kit for the foreseeable future.”

Initial communications from Elon regarding the required testing said LabCorp’s at-home test kits must be used. As of July 19, the Ready & Resilient website encouraged the use of the LabCorp test.

"Elon is asking all students, faculty and staff to use the LabCorp system," The site initially said. "Elon does not have the medical staffing to verify test administration and results from multiple providers across the country over the short testing window prior to the opening of the academic year."

The site also stated that other tests would be accepted in "special cases" such as that of international students without access to the LabCorp test kits.

According to Jeff Stein, chair of the Ready & Resilient committee and vice president for strategic initiatives, the website and policy regarding required testing was updated following community feedback. As of July 29, the Ready & Resilient site states that any students "unable or unwilling" to use LabCorp's test can submit their own PCR test results, and lists instructions on how to do so.

The website was also updated to clarify that individuals are not asked to self-quarantine following their tests but are asked to "limit social contact" in the weeks before returning to campus. Those that receive a positive test result will need to quarantine up to two weeks before being allowed back to campus.

LabCorp's pre-semester test is free for faculty and staff, but can cost students $129 when charges are applied later in the semester.

According to the Ready & Resilient website, students will be automatically billed for the test in September, after materials to request reimbursement from insurance companies become available and Elon provides the opportunity for students to apply for a fee waiver through the university.

According to Stein, students who do not use LabCorp's test may still apply for a fee waiver for their tests, but more specific information regarding the fee waiver will not be available until September.

Perceptions of the test

Professor of Cinema and Television Arts Naeemah Clark has been actively engaging with students and community members on social media about Elon's COVID-19 testing policy, and said in an interview with Elon News Network she has noticed common misconceptions regarding university funding.

Clark said she has seen calls for Elon to cover the cost of COVID-19 tests, reduce the cost of tuition, and rehire adjunct faculty members recently told they would not be teaching in the fall.

"There's just no way to do all those things," Clark said. "There's a finite amount of money."

"We don't trust each other enough, I think," Clark said.

Among those expressing concerns on social media was alumna Lauren Weaver '17, who spoke out about Elon's required COVID-19 testing, citing the cost associated with LabCorp's test.

"That's a lot of money for some people, and it just is really upsetting to me because Elon is preaching about diversity and inclusion and we're promoting this whole thing where we want to welcome everyone and diversify," Weaver said in an interview. "If they actually cared they wouldn't be charging people this amount of money because it's not inclusive to lower income families."

Along with Weaver, alumnus Mason Pratt '20 also expressed concerns regarding the university's connections to LabCorp.

Elon does have ties to LabCorp, with the company's founder James B. Powell and his wife Anne Ellington Powell as well as LabCorp Board of Director member Kerri B. Anderson each currently sitting on Elon's Board of Trustees. However, the board of trustees was not involved in the decision to use LabCorp for Elon's COVID-19 testing, according to Stein.

"[The Board of Trustees] don't manage day-to-day decisions, that's not their role," Stein said. "For us, this was about quickly providing testing for 9,000 students, faculty and staff in a workable model."

Ultimately, Stein said Elon considered options through Cone Health, different types of COVID-19 testing and different test providers. He said the decision came down to LabCorp offering PCR testing with a system that could notify the university about who had taken their test. He said LabCorp had the capacity to handle the roughly 9,000 anticipated tests and said the company was one "we can trust."

During LabCorp's second quarter earnings call on July 28, the company's president and CEO Adam Schechter said LabCorp has performed more than 8.5 million PCR tests, with a current capacity to carry out 180,000 tests per day. The 9,000 anticipated tests cited by Stein would account for 5% of LabCorp's daily tests, and just 0.1% of their total PCR tests so far.

While LabCorp was represented in the Task Force on Fall Semester 2020 in the working group on health maintenance, the decision to use LabCorp was made between late June and early July, according to Stein. He could not recall the date the contract was finalized, and LabCorp did not respond to a request for confirmation of this information.

Stein emphasized that because testing is "imperfect," Elon is employing other measures such as the use of face masks and sanitization of surfaces, as well as randomized testing throughout the semester. Students will not be charged for testing beyond the initial pre-semester test.