Amid a pandemic, non-tenure adjunct professors at Elon University learn they will no longer be teaching this fall 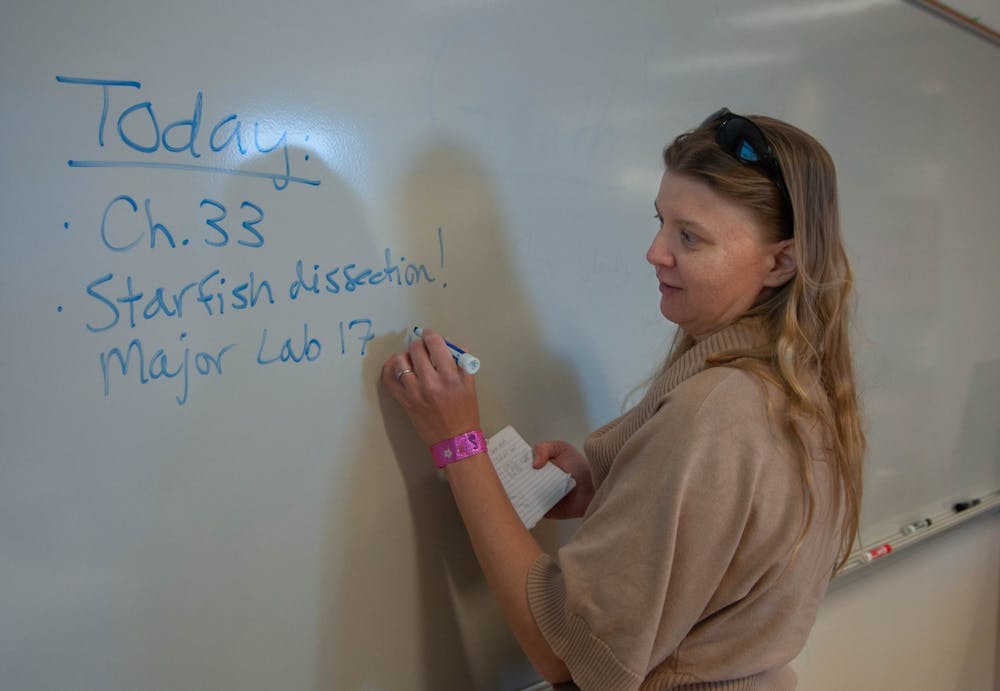 
Catherine Bush, former assistant professor of biology, teaching a course. Bush, a non-tenure faculty member, was not rehired for fall 2020.

After weeks of waiting, Robin Gary received an email detailing how to turn in her keys, and when she would lose access to her Elon University email.

“I got a generic form email from HR for faculty leaving Elon,” Gary said. “That’s how I found out that I had no job.”

The former adjunct professor of sociology had just completed the first weeks of training for teaching Elon 101 and participated in university discussions about racial injustice when she found out she would no longer be teaching at Elon. As a Black woman sociologist with a background in race and gender, Gary said she felt uniquely qualified to teach this upcoming semester and bring current events into the classroom.

“My heart was wrapped up in Elon and my students and wanting to be there during this important time in history,” said Gary.

Adjuncts like Gary are used to job instability; non-tenure track professors can be offered limited-term appointments or a visiting appointments with no guarantee for reemployment, according to the 2019-20 Faculty Handbook. According to the Journal of Education and development, nearly 75% of those who teach undergraduate courses at American colleges and universities are not full-time professors “but rather contingency employees who work on limited-term contracts.”

For the 2019-20 academic year there were 128 non-tenure track faculty, according to the university fact book.

Provost Aswani Volety said the recent budget approved by the Board of Trustees for the next two academic years — which includes a 5% reduction — may be partially why jobs are or are not extended to non-tenure faculty, but it’s not the only factor. Hiring these faculty also depends on student enrollment and demand for classes. Resources are then allocated to what’s in demand.

“You just have to look at where the need is and make sure the resources are aligned with it,” Volety said.

As of June 5, the university has received 1,669 enrollment deposits from freshmen, according to an email President Connie Book sent to faculty and staff. As of May 12, the university expects approximately 1,725 freshmen to enroll this fall, compared to 1,660 the previous year according to Greg Zaiser, vice president for enrollment.

In this email, Book said the budget relies on enrollment and in-person classes.

“We remain in a dynamic environment and Elon’s budget outlook is dependent on our ability to return to residential instruction in the fall and our enrollment,” Book wrote.

Catherine Bush, former assistant professor of biology, was also told she would not be teaching in the fall, and there would be no classes available for the academic year. Bush has taught at Elon since 2012, and has been on the organizing committee for the Elon faculty union, Elon Faculty Forward, since its inception.

After hearing from other non-tenure faculty members in May who were worried about keeping their jobs, Bush decided to email her department chair, asking about the status of her position for the fall. Bush said because enrollment numbers seemed to be fine and students are heading back to campus, she didn’t think the university would cut faculty members.

“This is the reason that we want the union: because I did an amazing job and I’m out of a job right now and I have no appeal process,” Bush said. “How could you tell that if I’m not employed, that it is not because of the union?”

Gary said not having a reason for not being rehired has been difficult, and she does wonder if her support of the union, rather than the pandemic, played a part in no longer having a job.

“What has happened to me and my other faculty shouldn’t happen to anybody,” Gary said. “I will support and continue to support the union efforts at Elon, but if I had a time machine or a crystal at the time, and it said you are going to end up unemployed? Then no, I probably would not have.”