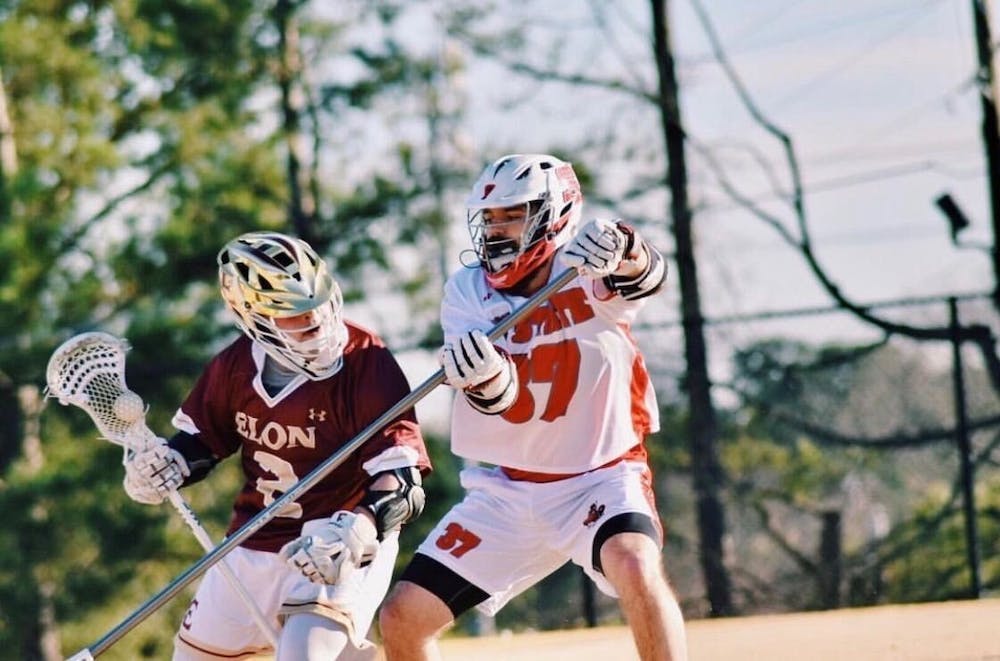 As part of preparation for the fall semester, Elon University club sports were given guidelines for both practice and game play. Low-risk sports, such as climbing, equestrian, swimming and golf, are still allowed to travel to compete.

During practices, masks must be worn when social distancing cannot be maintained. Due to the governor’s current restrictions for outdoor gatherings, only 25 people will be allowed to participate per practice.

Teams must also submit a practice plan, including every drill that will take place during each practice that week. These instructions have required new methods of preparation for all club sports, specifically the ones considered high-risk.

Men’s club lacrosse began preparing for this upcoming fall midway through the summer when Elon announced their plans for the semester. Max Kahan, president of the club, considers himself to be in an interesting position this fall as a leader during a time of change to how practices and games operate.

“There’s still planning that I haven’t been able to do because I don’t know if I should be doing it. That’s sort of an issue that we need to address in-person, because it’s kind of one of those things where it’s hard to articulate what’s going on over email,” he said.

For India Kirssin, president of women’s club soccer, the same is also true regarding the restrictions around practices. The logistics of how they will be able to accommodate the normal amount of players — usually anywhere between 60 to 80 students — is still in the works.

“We are trying to figure out ways to make sure we can accommodate all of the girls that come, but still obviously comply with that restriction as well,” Kirssin said. “I’m excited for us to really think outside the box and put some more creative ideas into play and hopefully there’s things that stick.”

The requirement to wear masks poses its own challenge for lacrosse, Kahan said.

“Obviously, we have a responsibility to make sure everyone is safe. But it’s tough for just one person to do,” he said.

For men’s club lacrosse, Kahan said it is hard to accept that the team can not hang out as friends as they would in past years.

“We’re still planning on doing socially-distant bonding activities, as well just to try to keep that core feeling that’s always there with soccer even through this crisis,” Kirssin said.

The club’s executive board has considered planning activities such as an outdoor movie night, a socially-distanced picnic where members can bring their own food and one-on-one “dates” between upperclassmen and incoming freshmen.

The organization fair, which will be done virtually this year, is a key way for freshmen to understand more about organizations on campus, including club sports. Kahan said that since the fair will be held online this year, it will be a new challenge to present information to the freshman in an effective manner.

“There’s only so much we can do virtually, where in-person we would have our helmets and some gear on the table, [and] maybe some players having a catch behind the table,” he said.

However, with this change, he still hopes to give his teammates the same experience.

“I really want to make sure everything runs smoothly and everyone still enjoys themselves, even though it’s very different times,” he said.

Women’s club soccer is ensuring that they will make an effort to recruit freshmen despite the challenges posed by the new organization fair rules. If they were not to invite new players, they could potentially lose a whole class of team members. Kirssin said it is essential to make sure these first-years are still getting involved.

Beyond recruiting concerns both presidents are also worried about the possibility of suspension due to strict guidelines created by the university. If one person in a club or organization breaks an Elon policy, it could result in serious consequences, according to both Kahan and Kirssin.

“They were saying during the student leader training that even one infraction of the policies can result in an organization getting suspended. So, we’re going to have to be very careful and vigilant about everyone wearing masks,” Kahan said.

“As leaders of an organization and club, if we are at an official club event and are not following rules that means that myself and my co-president are both susceptible to discipline, which is totally fair,” she said.

Also, if any player tests positive for COVID-19, the club is not allowed to practice for two weeks.

“It’ll be a very interesting semester and I’m just hoping that we’re all gonna be able to somehow stick together through it, at a distance of course,” Kahan said.

Freshmen who would like to join any club or organization can do so through the virtual organization fair this Friday.