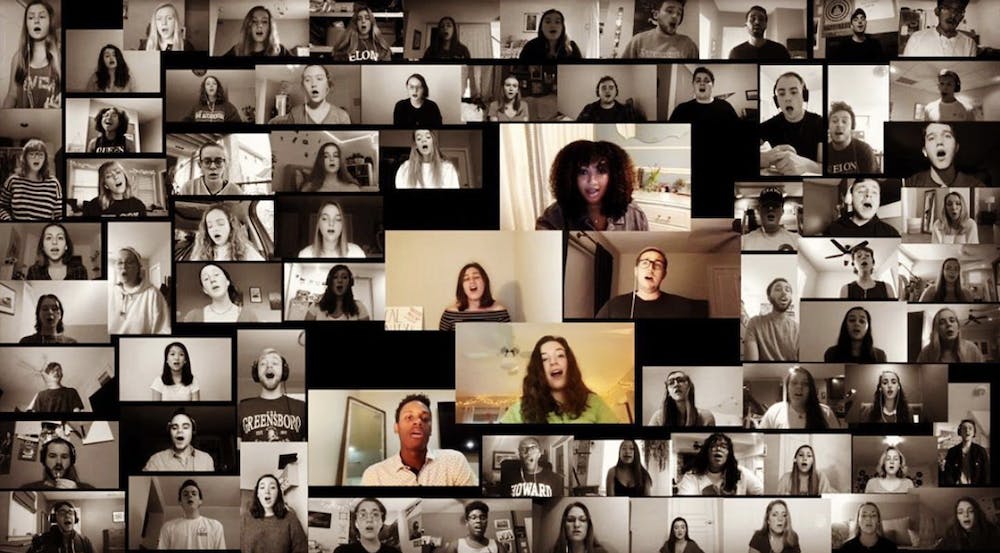 Miles Caraballo, an Elon junior, was sitting at home in April when the idea of creating a virtual choir came to him.

Caraballo, a music education major and music director for Vital Signs A Cappella group, thought because of the pandemic preventing people to physically meet that other people were missing singing together. Inspired by virtual choirs created by American composer Eric Whitacre, Caraballo decided to try and put his own virtual choir together.

“I thought of people who might be interested or people who were a part of a cappella groups on campus or in high school,” Caraballo said. “I didn’t want it to be me and like seven other people because that would be dull, so I reached out to some friends to gauge interest.”

After recruiting fellow Elon singers and friends, who in turn brought friends of their own, Caraballo’s Corona Choir of 71 singers was born. The majority of members attend Elon University, but others are as far away as California and Chicago.

“Having the opportunity to sing with people I’ve never met before and probably never will meet is incredible,” Elon sophomore and choir member Molly Herson said. “I love hearing the sound of all our voices and that we can emulate the choral vibe virtually.”

"Having the opportunity to sing with people I've never met before and probably never will meet is incredible.I love hearing the sound of all our voices and that we can emulate the choral vibe virtually."

Since the group has no rehearsals, Caraballo releases a survey before work on each song begins to see what parts the singers are interested in and comfortable with singing.

The group performs one song a month and they have released two so far.

After that, Caraballo sends out the music and everyone listens to and rehearses the parts on their own, which many of the singers agree is the hardest part.

“I’ve known about virtual choirs since middle school and I’ve always found them interesting,” Herson said. “Participating in one is very different from watching ones even if the rehearsal process is a bit challenging.”

She praised Caraballo for his hard work, and said he does his best to write out the vowel sounds and answer questions ahead of time.

Elon sophomore and choir member Kaylee Hayden is also a member of Vital Signs and participated in choir in high school. Corona Choir is the first music ensemble she’s taken part in since attending Elon, and being a member introduced new challenges.

“It’s really difficult not having everyone with you because that’s when a lot of people come together,” she said. “Getting the feel of everyone is so helpful and it changes your tone, which way is best for me to sing because I don’t know how others are singing.”

Hayden said the same challenges occur with having a solo part because she doesn’t know who she’s dueting with and it’s hard to gauge how much she needs to accommodate her voice.

Caraballo understands rehearsing without a group may be a struggle for his singers, but he reminds them how well their voices come together in the finished product.

“The most important part about singing is that you’re with people you like,” Caraballo said. “It’s hard finding the motivation to do something that feels a little silly because you’re singing a part on your own by yourself.”

The group released their first song, a cover of Katy Perry’s “Rise,” on April 18. They chose the song because of its empowering message. Caraballo said the video was well received and got lots of positive feedback from the community, including a like on Twitter from Perry herself.

Elon sophomore and choir member Tommy Truitt declined to participate in the first project because he was busy with schoolwork, but thought it was a great opportunity. After realizing he was a performance artist who hadn’t made any art during quarantine, he got involved when signups for the second song came around.

“I think the choir is a really cool way to make art, spread love and build community even though we aren’t in person during this time,” Truitt said. “It gives you a new sense of friendship because when we’re on campus again, we can say we were in quarantine and we did this together.”

"I think the choir is a really cool way to make art, spread love and build community even though we aren't in person during this time.It gives you a new sense of friendship because when we're on campus again, we can say we were in quarantine and we did this together."

Corona Choir released their second song on June 5, which was a cover of the 1980s hit “Time of My Life” from the film Dirty Dancing. The song was chosen as a tribute to the class of 2020.

“I try to pick songs that match the vibe of the world,” Caraballo said. “We try to go for happier songs or songs based on what people need.”

Any time Corona Choir begins a new project, new members can join. No prior singing ensemble experience is necessary, and Caraballo encourages those who like to sing but would be intimidated to join a live choir to join one of the virtual choir’s projects.

“I’m hoping that the viewers will be able to gain that just because we are all stuck in our houses doesn’t mean that we are alone,” Caraballo said. “Everyone else is bored and if you have a project in your head, you should act on it because nothing is impossible when you just ask.”