The Inn at Elon receives federal aid to bring back employees 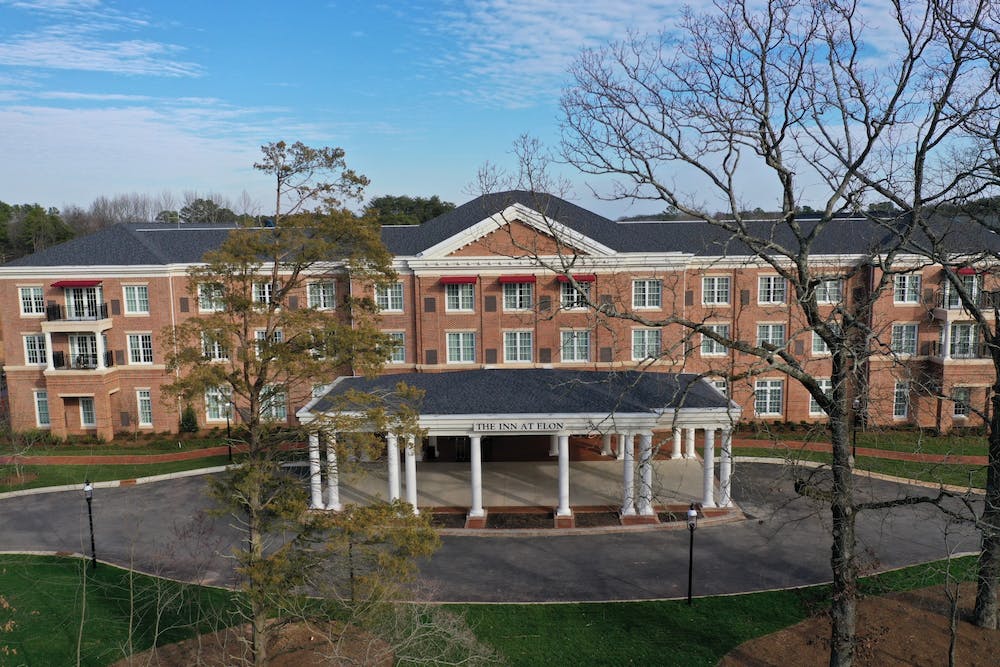 
An aerial view of the entrance of the Inn at Elon, taken in January 2020.

Employees who were previously laid off or furloughed from the Inn at Elon are now being brought back after receiving funding from the federal Paycheck Protection Program established by the CARES Act.

“We worked with Charlestowne — that is the operator of the hotel — and were successful in the payment protection CARES Act funding, so they are recalling all of those employees,” said Connie Book, president of Elon University.

“The Inn at Elon has qualified for funding through the Small Business Administration’s Paycheck Protection Program and is creating a plan to recall several employees previously laid off or furloughed due to the pandemic,” Covington wrote. “These employees would be brought back to support the operation of The Inn, which continues to see new reservations and small increases in business.”

The Inn at Elon had temporarily cut the majority of its staff because of reduced revenues caused by the coronavirus pandemic according to Covington.

The number of employees who had been furloughed or laid off is business information that is not being released to the public by Charlestowne Hotels, wrote Covington. Francine Boissonneault, general manager of the inn, did not respond to Elon News Network’s requests for comment.

Boissonneault refused to comment on the layoffs and furloughs.

“Travel restrictions, ‘stay-at-home’ orders and public health concerns have led to multiple room reservation cancellations, lost event bookings and a reduction in future bookings at the inn,” Covington wrote. According to Boissoneault, guests will be offered full refunds as long as they cancel 48 hours prior to their stay.

These revenue reductions will have a negative impact on the amount of money going toward student scholarships, the main goal of the Inn at Elon, wrote Covington. Any revenue beyond operating costs for the inn is designated for scholarships.

“These unprecedented challenges have impacted The Inn at Elon’s revenues, which will temporarily reduce the amount of money generated by the hotel to support student scholarships,” Covington wrote. “How much and for how long this impact will be felt is not yet known.”

Book previously said she anticipated these scholarships to start being awarded to students in the Class of 2021. Book declined to further comment on how COVID-19 will impact the scholarships that the inn’s profits are tasked with providing.

Like businesses around the nation, the Inn at Elon has changed procedures to combat the pandemic. According to a statement from Boissonneault, the inn has increased disinfecting public spaces and is only offering take-out from The Mark, the inn’s restaurant.

Around the inn, Boissonneault wrote they have increased the availability of hand sanitizer in public spaces. They are also frequently disinfecting highly touched items such as elevator buttons, room keys, bathrooms, and tabletops using EPA-approved solutions.

The inn is still providing in-room dining using social distancing measures. Once businesses are allowed to reopen, the restaurant will continue to clean highly used surfaces in between every use, according to the statement.

Other local restaurants, such as The Root and Tangent Eat + Bar, have also temporarily cut their staff because of the pandemic.

The coronavirus’ effects on local businesses

Layoffs and furloughs are two of the routes many businesses have been taking because of the financial burdens of COVID-19.

“Layoffs usually begin as ‘indefinite,’ meaning the employer hopes to hire the person back once business picks up again,” wrote Brandon Sheridan, professor of economics. “A furlough can be anything from a reduction in hours to a complete halt to working; however, a furloughed employee can usually still receive benefits such as health insurance, if it is something their employer offers.”

Sheridan teaches about the principles of economics and economic growth at Elon. He wrote that right now, both furloughed and laid-off employees are eligible for state unemployment benefits.

Many of the small businesses near campus rely on student traffic to turn a profit. The CARES Act and Paycheck Protection Program will help local economies, but not without its own difficulties wrote Sheridan.

“The initial rollout of these programs was rocky, but additional funding was added to PPP — this will hopefully help local businesses bridge the revenue gap while the economy remains closed,” Sheridan wrote. “In the broader context, small businesses employ about half of American workers, so assisting and supporting small businesses is really important.”