The team has been able to participate in virtual competitions, practices, as in-person activities are globally put on hold 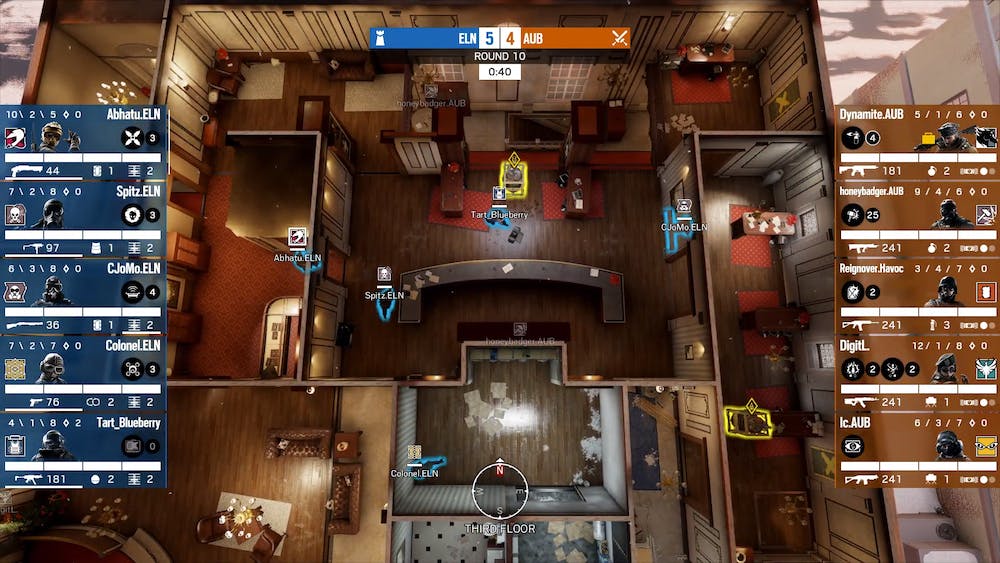 While most people may be struggling to adjust to life online, the Elon Esports community is used to the idea of virtual operations. Despite the inconveniences of a closed campus, the club is functioning almost as normal.

Esports refers to competitive and professional gaming, where individuals or teams of players go head-to-head from computer games to Xbox.

Elon Esports president and junior Connor Simpson said scheduling times to play and practice has been difficult now that everyone is at home, but that hasn’t stopped them from organizing and participating in matches and online gaming as a team.

He said despite the challenges, the club is fully able to function remotely and there are even some advantages.

“Thankfully, being able to continue things from online is very beneficial to the club, as we can continue practice with people who either weren’t able to bring their computers to school or have better equipment at home,” Simpson said.

According to Simpson, most esports leagues have canceled tournaments because of the pandemic. The Rainbow Six: Siege league — a team of members that plays the online multiplayer shooter game — has been continuing.

"Rainbow Six: Siege has kept all of our collegiate tournaments running through these times and they have been functioning fairly well but with more people disconnecting or being further from the server it is being hosted on,” Simpson said.

Sophomore member Chris Morrison said the pandemic has affected their abilities to play but only slightly. Club members participate in scrimmages against other teams and have more time to prepare for matches now that most people have looser schedules being at home.

Another advantage the club has is most people have better internet connections or equipment at home than at Elon, Morrison said. As a result, Elon Esports now has the ability to connect with more members than they could in person.

Freshman John Spitznagel said although the club hasn’t faced many technical issues, he misses the social aspect of the club on campus.

“The one side of it that we lost was the social aspect outside of games,” Spitznagel said. “While we have grown strategically, we haven't gotten much closer socially.”

Competitively, dealing with different time zones can be an issue according to Spitznagel. To fix this, the team has started to play fewer competitive games to keep connected.

“One way we're trying to work around the social distancing aspect is by playing more casual games with one another such as Minecraft,” Spitznagel said. “It's a change of pace for us and we're able to have conversations while also relaxing online.”

Simpson said the club opened a public server on the popular game Minecraft, which anyone can join through a link on the Elon Esports discord.

“Our club has just added a public Minecraft server, which is a very easy and fun game anyone can get into and bring their friends to our server for lots of fun,” Simpson said.

Finding other teams to play against has been difficult according to Spitznagel. Many people outside of Elon were not able to get all of their equipment home as a result of campuses closing nationwide.

Both Morrison and Simpson said the only thing they don’t have the ability to do at the moment is distribute jerseys. This year, the club invested in jerseys for the team, which they won’t be able to distribute until the fall semester.

"Gaming definitely helps in these tougher times with providing something to pass the time between homework and class time."

Simpson recommends that any organization set up a place for club-wide communication. He said the esports team uses Discord, a chat room server that allows the team to virtually communicate with each other about club and non-club related content.

For Simpson, gaming helps him to relax, something he finds important during the stress of the pandemic.

“Gaming definitely helps in these tougher times with providing something to pass the time between homework and class time,” Simpson said. “It also helps take your mind off the difficult times around us and formulate your own kind of fun times and experiences while in your home.”

Spitznagel said gaming keeps him entertained while stuck at home.

“Gaming has filled my time in between schoolwork and sleep,” Spitznagel said. “It has helped me stay connected with those who I miss from school and also brings some competition into quarantine too since little to none is happening in the real world.”

Morrison shares a similar view. He believes that right now gaming is especially important and said that even organizations like NASCAR, F1 and the NBA have begun broadcasting players participating in virtual simulations of their respective sports because of live sports being put on hold.

“Watching gaming content as entertainment will be happening even more now, and it is showing on more mainstream media platforms.,” Morrison said. “These are crucial times for esports and gaming as a whole.”