As Elon’s eSports team grows, so does desire for official club sport recognition and funding 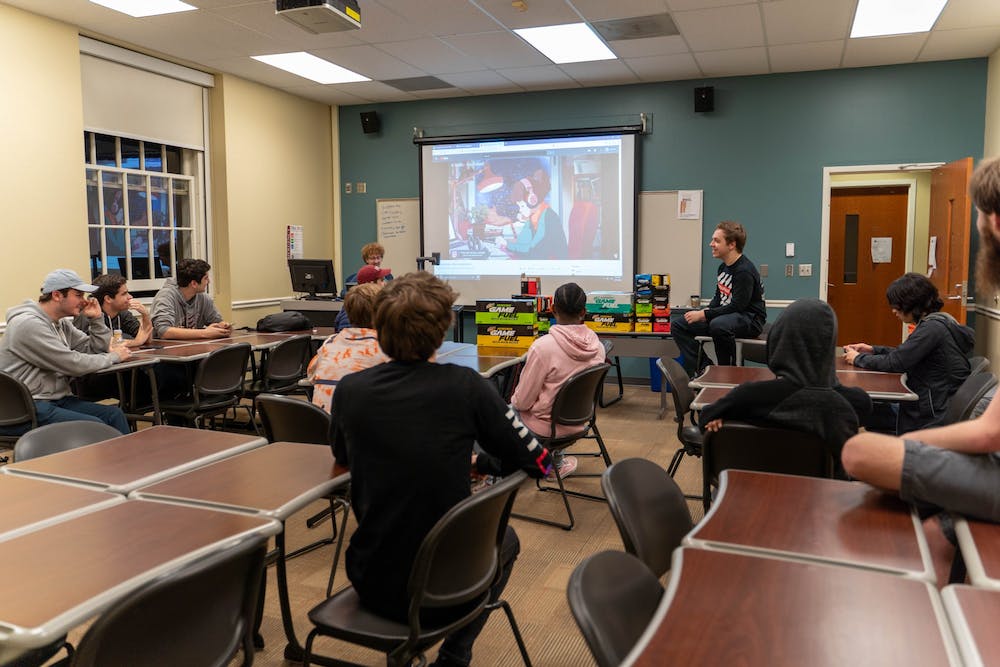 Photo by Clare Grant | Elon News Network
Members of the ESports team at Elon University gather for a team meeting discussing what the plan is for their future meetings.

A cascade of characters leap over obstacles and evade opponents. They face off against each other, fighting until the last breath. The match ends with one player left standing — it always comes down to the final seconds.

Suddenly, a giant arrow propels through the stage, smashing the opponent off the screen.

Link comes in first place, with Donkey Kong in at a close second as the victory animation rolls across the screen.

From classic Nintendo games like Super Smash Bros, to high-intensity shooter games like Call of Duty, eSports brings video games and competition to a worldwide stage – even at the collegiate level.

is the minimum amount of funding Elon's eSports would need if Campus Recreation and Wellness supported the club. This would just cover four computers and the gaming setup.

Elon eSports, which is composed of members of the eSports club on campus, is meeting with the club sports portion of Campus Wellness & Recreation to discuss being classified as a club sport for next year. The team is currently considered a programming club rather than a sport, according to junior Connor Simpson, president of Elon eSports. But for him, the difference between them and traditional sports is slim.

“The mental effort of those split-second decisions is what classifies to me video games as sports,” Simpson said. “They don’t require as much physically, but the reaction time is fully there.”

Simpson told members that becoming a club sport means Elon eSports will receive funding from Campus Recreation & Wellness and will be officially listed under club sports, giving them more presence online and in the community.

Simpson said the bare minimum they would need for four computers and the gaming setup would be $10,000.

“It is a lot to ask for money, but it’s something that once we get it, we can just go,” Simpson said.

Despite existing for seven years, there were only five people in the club when Simpson joined his freshman year after the university changed how they received the Internet.

“Three years ago was when the club just died,” Simpson said. “They pulled out all the ethernet on campus — every PC, they turned into a Mac.” According to Simpson, wireless connections create lag during video games, which affects a player’s precision and timing when competing. PCs also offer a more stable connection as opposed to Macs for gamers.

Simpson stepped into a leadership role for the team during his second year and brought new people onto the executive team and the club itself. Now, Elon eSports has 60 active members.

The club even recently received a sponsorship from Game Fuel, an energy drink created by Mountain Dew. After Simpson reached out, the team received around 50 cases of free Game Fuel for the players.

Elon eSports plays a variety of games, including League of Legends, Super Smash Bros. and Rainbow Six: Siege. Each game has its own respective team within Elon eSports. The Rainbow Six: Siege team has seen success so far this season, currently ranked second out of eight teams in Collegiate Esports Association: Siege.

“We are currently in the top of our division in the one tournament that we knew we were going to be playing,” Simpson said. “That’s a tournament with 19 different divisions and eight teams each.”

Recently, Elon eSports got an invitation to a tournament run by the College Rainbow Six League for the best 32 collegiate teams in the nation for Rainbow Six: Siege. Though they did not place into the competition from the trials, they were invited as them in as the 32nd team.

“Technically, we’re among the top 32 teams in the nation,” Simpson said. “There are other teams in the tournament that we’ve played before and have either gotten really close to beating with a different roster or beaten. We could be top 20 in the nation.”

Freshman John Spitznagel joined the team during his first semester at Elon after searching through PhoenixCONNECT and seeing Elon eSports. He said he’s been playing video games since he was nine and had watched eSports before coming to Elon. Participating in eSports was always something Spitznagel was interested in.

“I’ve always wanted to take a shot at the collegiate or pro scene,” Spitznagel said.

At first, Spitznagel said he was cautious about playing because he did not want to mess up the strategies the team already used in their games. After playing more with the team, he became more experienced and comfortable playing. Now, he plays for their Rainbow Six: Siege, Overwatch and Destiny teams.

Spitznagel said the mental game of eSports is comparable to traditional sports.

“It’s more about the hand-eye coordination,” Spitznagel said. “Mentally, you have to take into account the entire space of whatever map you’re playing.”

Spitznagel said the team practices twice a week and has one or two games a week.

“On game days, we either get food before or after the game just as a team, and then we warm up an hour before just to get our mechanics warm and our minds focused on the game,” Spitznagel said. “It’s a good balance between school and just playing video games.”

Rochelle Ford, the dean of the School of Communications, said she has asked faculty to include eSports in their curriculums and discussions. The school is also looking for new ways to introduce eSports to students.

“We’re looking at trying to do a J-Term or an intensive weekend or a master class on this topic,” Ford said. “We are now sharing job opportunities and internships with a lot of the eSports companies, including the one in Cary, Epic Games.”

Ford said she sees eSports as an interdisciplinary opportunity that could connect engineering, design, management and more. The university is also discussing where the team could be housed on campus, but a decision has not been made at this time.

Despite the possibility of advancements for the team, Ford said Elon is not looking to have an official NCAA eSports team.

“That’s not a desire of the university,” Ford said. “It was meant to be more of a fan engagement opportunity.” She said there were possibilities of having halftime eSports matches during basketball games or setting up a gaming area in the lounge area of the Schar Center to entertain fans.