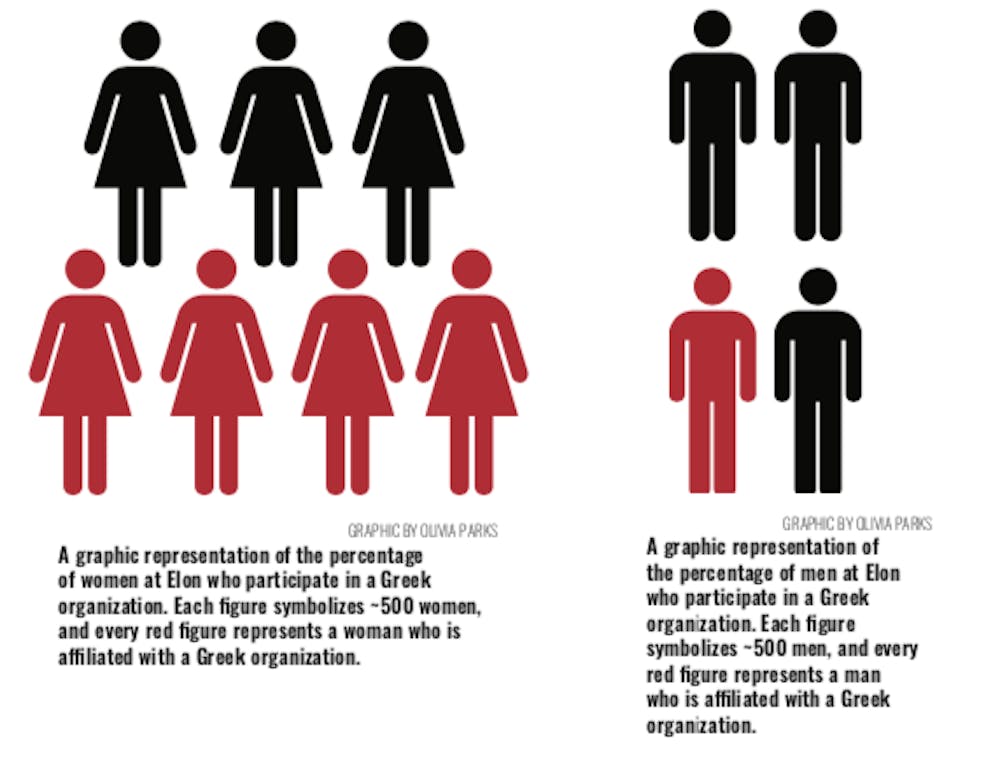 As the excitement of 2020 spring recruitment fades, hundreds of Elon women are now weeks into their new member period, counting down the days until their official initiation into the greek community. These new members contribute to the increasing number of enrolled women choosing to join greek life. But with a history of exclusive practices, some remain skeptical that the benefits of sorority life truly extend to the broader community.

According to the Spring 2019 Fraternity and Sorority Community Report, 56.5% of women are affiliated with one of the 13 sorority chapters on Elon’s campus. With such a large on campus presence, sororities have become a facet of the university community.

With 13 chapters to choose from, sororal organizations constitute a majority of on-campus groups dedicated to advocacy of female students. Alexa Rasmussen serves as president of the Panhellenic Association, and she said this system of support is the backbone of greek life.

president of the Panhellenic Association

“Sisterhood, to me at least, can be explained in one word: empowerment,” Rasmussen said. “This community consists of women who challenge each other to realize their potential and empower each other to achieve that.”

Austin Moore serves as vice president of the National Pan-Hellenic Council. Speaking from her own experience, Moore said greek organizations, especially those representing historically underrepresented groups, empower their members and provide a system of accountability that is unique to sororities.

“Sisterhood is honesty,” Moore said. “It’s having a group of girls who can be open and honest with each other and having someone who is willing to go the extra mile for you.”

“Immediately after joining my organization, I could feel the incredibly strong support system that surrounded me and the genuine friendships that were forming,” Rasmussen said. “And this doesn’t only apply to sisterhood within chapters but to the entire Panhellenic community at large.”

In both the Panhellenic Association and the National Pan-Hellenic Council, this sense of community extends beyond Elon’s campus and its undergraduate members.

In a recent Panhellenic Town Hall, chapter representatives shared stories of bonding with employers after learning of shared affiliations. Moore echoed this sentiment of professional support. Through the National Pan-Hellenic Council, she said she has gained a network of support that will persist long after she graduates.

“Sisterhood, for our organization, is a life-long commitment,” Moore said. “We have a smaller presence with numbers, but we also have a lot of affiliated faculty members.”

Greek systems are not without their critics, though, as sororities are frequently accused of being superficial organizations. Rasmussen finds the sorority stereotype inaccurate, and she hopes to change people’s perceptions by highlighting the ways sororities benefit Elon and the surrounding community.

“I feel that the biggest misconception held by people who are not involved in greek life is that it is only a social outlet,” Rasmussen said. “It’s so much more than that. Each organization works extremely hard toward their respective philanthropy work, and it often goes unrecognized by those uninvolved in greek life.”

Out of all women on Elon's campus, 56.5% are afilliated with one of the 13 Greek organizations that students have the ability to join.

Every sorority chapter at Elon represents at least one national or local philanthropy, and throughout the year, the chapter hosts events to raise money. In just the past year, Alpha Xi Delta raised over $31,000 for Autism Speaks, and Delta Delta Delta raised over $67,000 for St. Jude Children’s Hospital and Phi Mu had 100% participation in Elonthon, according to Rasmussen.

At the Panhellenic Town Hall, greek life representatives eagerly expressed that sorority membership is, for many Elon women, an overwhelmingly positive experience rooted in community and philanthropy. However, Rasmussen recognizes greek life may not be for everyone, and with over 200 other organizations on campus, a student can find her place outside of a sorority.

“Greek life is an amazing opportunity and outlet for service, leadership and friendship,” Rasmussen said. “With that being said, so are a lot of other non-greek organizations on campus.”

However even if a woman desires sorority membership specifically, she may be inhibited by factors outside of her control. Before she can become affiliated, a potential new member must face several social and financial obstacles that make greek life less accessible for some Elon women.

Both the NPHC and the PA have explicitly stated they do not discriminate on the basis of race, sex or sexual orientation. However, due to a lack of such representation within chapters, underrepresented individuals may be discouraged from participating in greek life.

Affiliated sorority members must make a financial commitment to their chapter and agree to pay dues and fees every semester. These costs vary between chapters, but members can pay up to several thousand dollars over the course of four years, according to Elon’s website. These external costs could be a deciding factor in whether a student joins greek life.

Sophomore Sarah Malone participated in the 2019 recruitment process but was unexpectedly dropped before she could receive a bid. Shortly after, Elon Locals News ran a story covering her experience.

Malone has now been unaffiliated for a year, and she looks back on recruitment with a level of discomfort. She said this is due in part to her recruitment counselors, called Pi Chi’s, emphasizing the rarity of getting dropped in the lead-up to recruitment.

“I was told, ‘If you keep your options open and stay true to yourself, you’ll find where you belong,’” Malone said. “So going into it, I was worried about getting in the wrong sorority — not being dropped. When I realized that does happen, it became a whole different playing field.”

The Panhellenic Association reports that less than 1% of women were released from this year’s process. According to Rasmussen, this number is impressive compared to other schools of similar size. It does not include women who did not receive a bid, voluntarily withdrew from the process or were barred from recruitment due to academic standing.

While being released from the process may be rare, Malone said this aspect of recruitment is consistently swept under the rug. She said after she went public with her experience on Elon News Network, people looked at her differently.

“It is definitely taboo,” she said. “There were definitely people in greek life that were not happy that I was talking about it.”

But despite potential backlash, Malone said she was motivated to speak out after a conversation with her Pi Chi’s. According to Malone, her Pi Chi’s offered their support and implied that girls often struggle with their mental health after getting dropped.

“They’re making sure you’ll be OK,” Malone said, “and I just couldn’t get that out of my head, thinking someone could hurt themselves because of this.”

The National Pan-Hellenic Council takes a different approach to recruitment. Rather than having a structured “rush” week, potential new members do their own research and pursue the organization they are interested in alone. Women get to know sorority members, attend information sessions and ultimately apply to their chosen chapter. This process is called membership intake, and it closes with a public presentation of the new members.

"After being told constantly to trust the process, it's hard to see all of your friends be a part of something and know that they didn't want you, They didn't choose you."

While the NPHC’S membership intake is also grounded in mutual selection, it is a far more intimate process than PA recruitment. In Moore’s opinion, NPHC’s smaller presence at Elon contributes to this level of intimacy. On campus, there are a third as many historically black sororities than historically white sororities; the average size of a Panhellenic chapter is 220 members, while the average size of an NPHC chapter is only 13 members, according to the 2019 scorecards.

At Elon, greek life can offer women community, leadership, mentorship, service and much more. But with the possibility of being released from the process, greek life is not entirely accessible to any woman who wants to join. Malone said she does not advocate for a radical transformation but hopes to soften the taboo around getting dropped or being otherwise unable to participate.

“After being told constantly to trust the process, it’s hard to see all of your friends be a part of something and know that they didn’t want you,” Malone said. “They didn’t choose you. And I know there’s a lot that goes into it. But being on that end... It still isn’t a good feeling.”