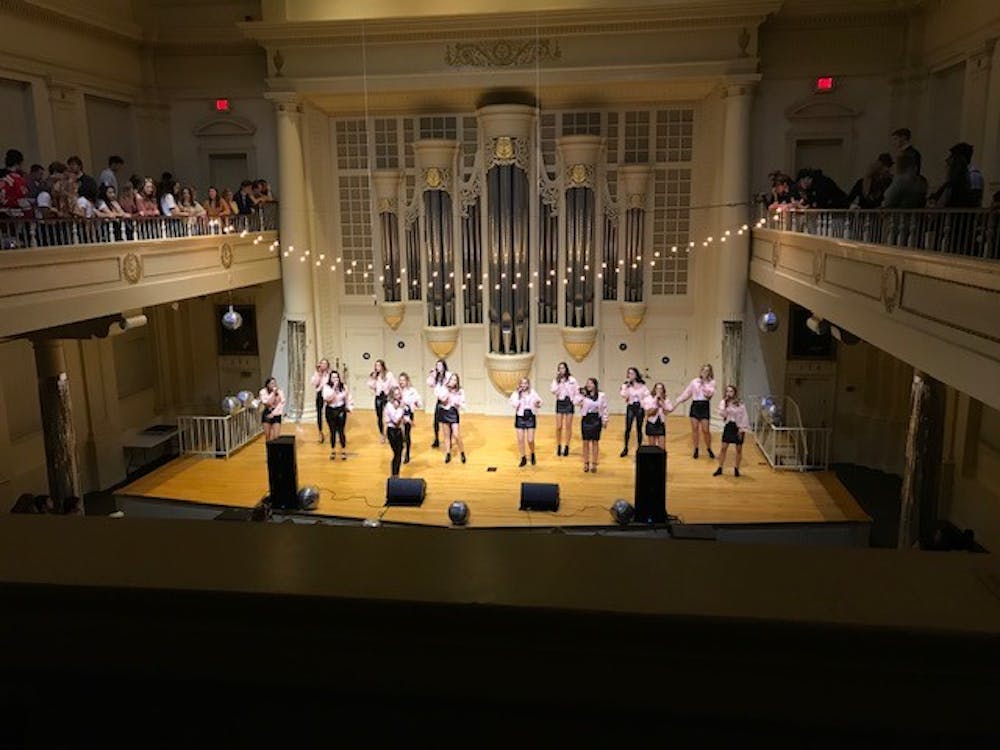 Updated on Tuesday, March 10 at 7:25 p.m. to correct the spelling of Shea Prulhiere.

Student a cappella groups gathered in Whitley Auditorium on Saturday, March 7 for the annual spring concert hosted by Sweet Signatures. Students and faculty on campus also came to show support for their musical peers.

“I think the most exciting part of the experience is just seeing everyone in the a cappella community come together and celebrate each other’s music,” said Shea Prulhiere, a member of Sweet Signatures.

Each a cappella group added flair to its performance by dressing up as a different decade. These choices ranged from the ‘20s to the ‘90s, with the exception of Rip_Chord, who dressed in togas to represent an “Ancient Roman” decade.

“My favorite themed outfit was the ‘20s Gatsby group because I just love the style of that period,” said Ethan Krone, an audience member. “I would like to see a cappella groups do a space or NASA theme. I feel like that would be intriguing to watch and there are a lot of songs to choose from in that category.”

The concert also featured the Academical Village People, an a cappella group from the University of Virginia. Although the concert has been in the works since the beginning of the semester, Prulhiere said that level of commitment makes the reward so much better.

“It feels amazing for our friends to come and support us. We work so hard for these concerts, and when everyone comes, it’s just so much fun and it means the world,” Prulhiere said.

Krone also said the lively crowd contributed to the ambiance of the night.

“I have been to a few a cappella concerts before,” Krone said. “Decapalooza was different in the sense that it felt more casual than formal. I know a lot more people in the groups now, and it was cool to see how genuine the interactions were between the members and the crowd. It had a cool atmosphere.”

One of the most unique things about Decapalooza, according to Krone and Prulhiere, is that all a cappella groups perform, creating an environment of mutual respect and camaraderie.

“My favorite part about a cappella concerts at Elon is how each group cheers for the other groups equally,” Krone said. “It lifts people up and gets the crowd more invested.”