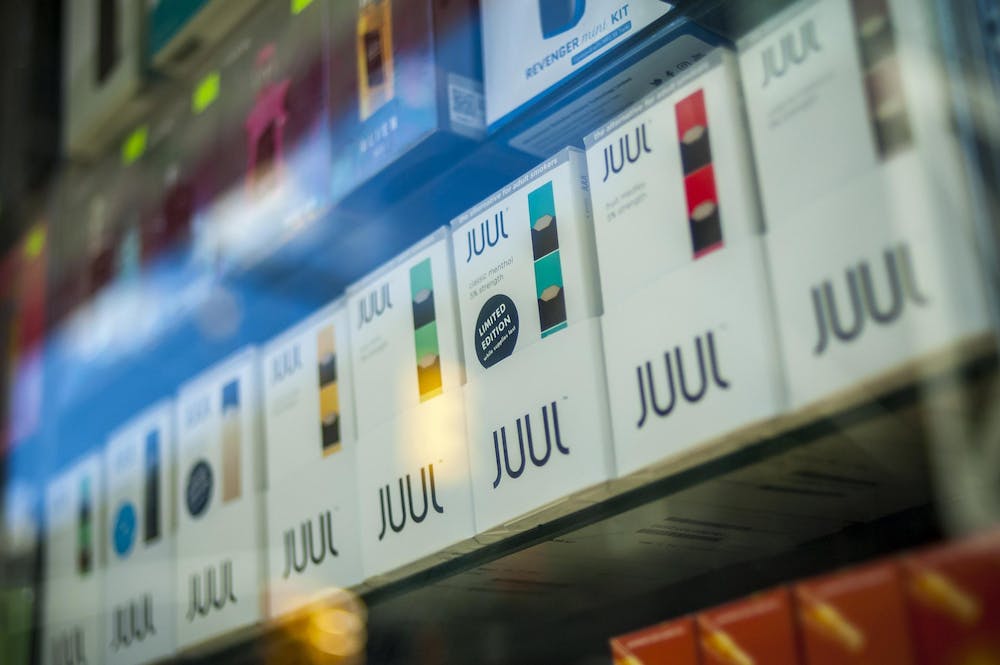 A selection of the popular Juul brand vaping supplies on display. [Richard B. Levine/Sipa USA/TNS]

DES MOINES, Iowa– Across the campaign trail, some candidates have been pushed to confront their stances on vaping and e-cigarettes. While most candidates have found a middle ground on the issue, not pledging to ban or support the industry, the issue is important to some voters.

To those in the industry, like Atmosphere Vapors owner Travis Puls and Unkle Ruckus’s Smoking Emporium Manager Ben Smith, raising the legal age for purchasing vape products to 21 is not what hurts their businesses.

“The side we're on is you know it's cool to raise it to 21 but we don't see why we need to ban all the flavors as well you know,” Smith said. “The age should kind of be enough in our opinion.”

As of 2018, 21% of college students reported vaping in a study by the Pew Research Center.

Smith said the recent slew of vaping-related illnesses has caused unnecessary panic since the majority of deaths were linked with “bootleg” Tetrahydrocannabinol (THC) cartridges containing chemicals such as Vitamin E Acetate. According to Smith, banning cartridge-based e-cigarettes such as Juuls does not eliminate the problem of teen vaping, since disposable e-cigarettes are still accessible.

“That's almost easier for you know, that younger generation to get a hold of because they're cheaper or whatever. So I think that just kind of shows [politician's] lack of knowledge on the subject,” Smith said.

"When I found vapor products, that gave me hope for a better future, and being able to provide that to other people in my community has made me a passionate advocate for tobacco harm reduction strategies."

At a recent rally in Marshalltown, Iowa, Sen. Elizabeth Warren (D-MA) said she wants “a rule that is based in science” after Puls asked her what her stance on vaping would be as president.

“I believe in science,” Warren said. “I believe that the decisions we should be making about our health should not be decisions that are influenced by an industry. …  I want a rule that is based in the best interests of the health of the people of the United States of America.”

After the rally, Puls said he has struggled with nicotine addiction from a young age.

“I understand firsthand how that addiction affects a young person. I didn’t go on to college or things like that because of my addictions,” Puls said, adding that vaping can help cigarette smokers kick the habit.

“I see everyday adults come in that have been smoking for years or decades, and they’re able to transition to these products, and they feel better about themselves,” Puls said. “When I found vapor products, that gave me hope for a better future, and being able to provide that to other people in my community has made me a passionate advocate for tobacco harm reduction strategies.”

“The way this was marketed and sold to the country was that it could be used for harm reduction to get people off of smoking combustible cigarettes as they call it into something that might be less dangerous, and that doesn't make them safe in their own right,” Buttigieg said. “And I believe the burden has to be on these companies to demonstrate that they are not causing harm rather than on regulators to demonstrate that they are.”

At his Newton rally on Jan. 11, Sanders was less willing to take a definitive stance on vaping.

Sanders said he was impressed that the cancer rate is going down, but said he is “not a great fan of vaping,” adding that “it's something that we have got to study,” and that he was “not overly impressed.”

Puls said the Democratic candidates might hurt their campaigns with their views on vaping.

“I know Republicans have seen what this issue is gonna do in this next election, and Democrats just haven’t seen that and that’s where I think they’ve miscalculated,” Puls said.

Maeve Ashbrook and Jack Norcross contributed to this report.