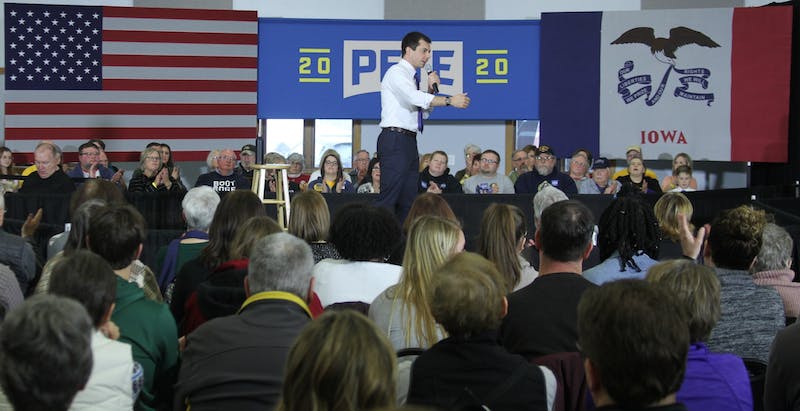 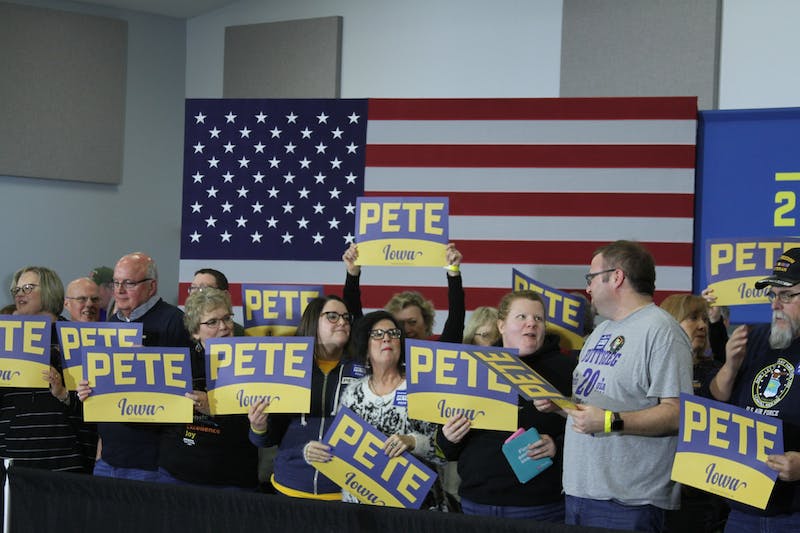 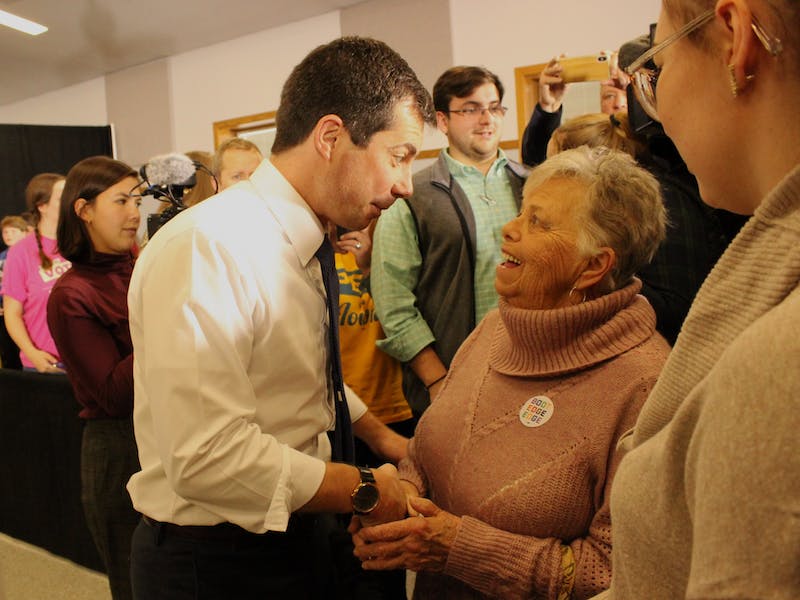 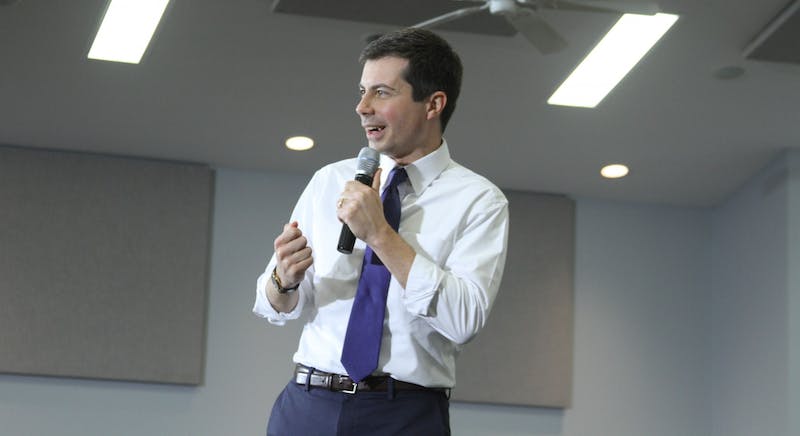 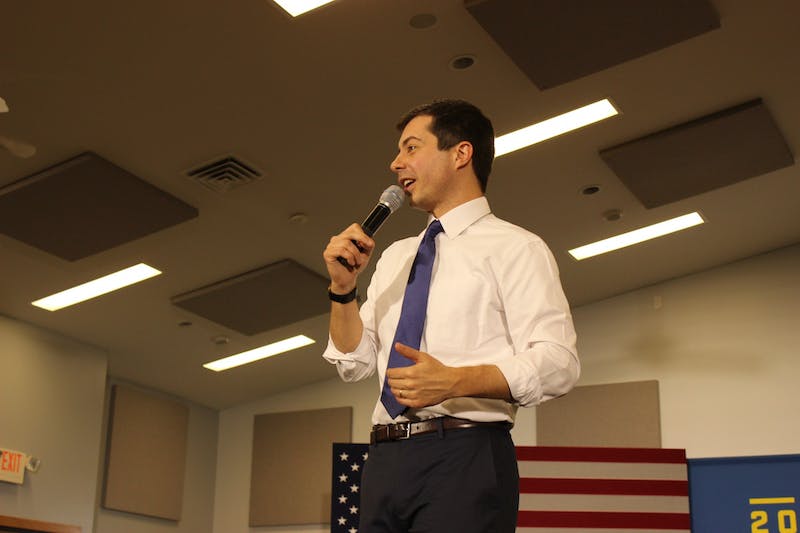 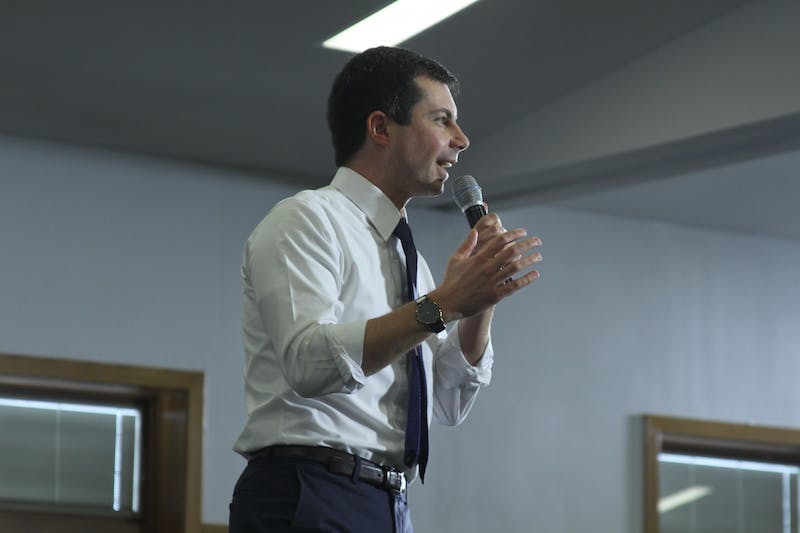 Darby Holroyd, a Drake University student, said she was a little out of her element given her experience working for Kamala Harris’ campaign.

Holroyd said she was disappointed that Buttigieg did not address race.

Buttigieg was introduced by former state senate candidate Vicky Brenner who said the candidate would be able to unify the American people, an issue attendee Lisa Fleishman said was critical.

“We believe that when good people come together, we can heal some of the partisanship and divisiveness that is happening in this country,” she said. “Pete knows how many things are broken here in Iowa and in America.”

A group of supporters just stood up holding their signs chanting: "Mayor Pete all the way, I-O-W-A." pic.twitter.com/mxHJI1y6Ie

The former mayor spoke to the roughly 300 people in attendance about the issues of climate change, economic instability and gun control, among other topics. Many of Buttigieg’s talking points were related to President Donald Trump.

Holroyd said these issues were among the most important to her.

Buttigieg said there would come a day when “the sun comes up over Madison County and the rest of the United States and Donald Trump is no longer the president,” and that “that is not the day that our problems end, it is the day that our work begins.”

Buttigieg also compared his military experience to Trump’s actions, saying “There’s a lot more to honoring that service than the actions of a president who beats his chest, talking about the military, throws a military parade, but then throws out military justice.”

Buttigieg mentioned the importance of his faith but said that he would “never impose it on somebody else” and said that “this country belongs to people of every religion and no religion equally, and God does not belong to a political party.”

Buttigieg mentioned some of his intended policies, saying he would “clear up” Citizens United, and enact Medicare for All who Want it. He emphasized the importance of addressing mental health within healthcare.

During the question portion of the town hall, Buttigieg was asked about a host of topics ranging from vaping to sexual trauma in the military.

When asked about how he would address the use of e-cigarettes in high school students, Buttigieg said: “the burden has to be on these companies to demonstrate that they are not causing harm,” rather than the “burden” being on federal regulators.

When Elon University senior Aileen Bell asked the former mayor how he would guarantee “reproductive rights to anyone with a uterus,” Buttigieg said he would appoint justices “who understand this to be part of American freedom” and that the “women facing the actual decision” would be allowed to “draw the line” in terms of reproductive rights.

When asked about the issue of gay conversion therapy, which is currently legal in the state of Iowa, Buttigieg said the practice “should not be tolerated,” and that although there has been “tremendous progress” for the LGBTQ community, there’s a “risk of thinking that the struggle for equality ended with marriage equality.”

Buttigieg was also asked about his so-called “wine cave” fundraisers and transparency within the campaign. The former mayor said he uses each contribution to “build the campaign that is going to make Trump and Trumpism history” and said that he invites the press to his fundraising events.

Buttigieg did not take questions from the press following the town hall.