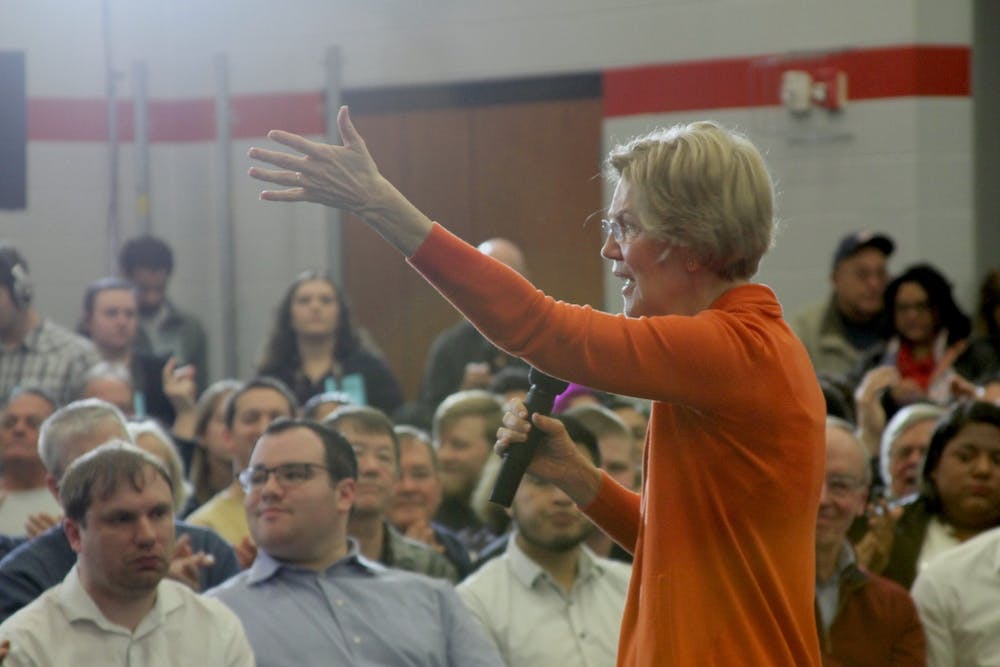 
Sen. Elizabeth Warren (D-MA) addresses the roughly 410 people in attendance during the Q&A portion of her Marshalltown, Iowa rally.

MARSHALLTOWN, Iowa — Former Secretary of Housing and Urban Development Julián Castro introduced Sen. Elizabeth Warren (D-MA) at her town hall in Marshalltown, Iowa on Jan. 12. Castro was one of several candidates who threw his hat in the ring for the 2020 democratic nomination for President of the United States, before dropping out of the race earlier this month and endorsing Warren on Jan. 6.

In his introduction, Castro talked about what sets Warren apart from the rest of the Democratic field from his perspective as a former candidate.

“Here’s what I saw. Nobody is working harder in this race than Elizabeth Warren,” Castro said. “I also saw that vision that we have for an America where everyone is able to achieve their dreams because they have better healthcare, better educational opportunities, a good job. She’s about making sure that no matter who you are in this country that you have a fair shot.”

After entering the gym to Dolly Parton’s “9 To 5,” Warren talked about her life’s story and fielded questions from the audience. The senator discussed topics such as the national debt, immigration, criminal justice reform, vaping and climate change.

“What scares me the most is every single time the scientists go back and collect more data, the problem is worse than we thought. And we have less time than we thought. We cannot overstate the urgency of the moment,” Warren said.

Speaking with the press after the speech, Warren addressed Elon News Network.

“College students should vote for me because this is all about your future,” Warren said. “2020 is this remarkable opportunity where the door has opened just a little bit that we can make big structural change.”

Drake University student Maili Cotter-Brown, said she has attended numerous campaign events in preparation for the Iowa caucuses. While she says she is still undecided, the most important issues for her are education and healthcare. Collet-Brown says she appreciates that Warren puts education high on her agenda, but she would like to see more.

“I like seeing Warren’s stances on the issue. But even for a progressive candidate, I don’t know that her education policy does enough to help college students and especially people from the middle class, not necessarily the lower classes,” Collet-Brown said. “Expanding the Pell Grants and expanding trio programs helps non-traditional students and students of lower-income, but that doesn’t do anything to help students like me, who are still hundreds of thousands of dollars in debt, even though our family might have a higher income than the Pell Grant.”

Warren will continue to host events on the campaign trail in Iowa until the caucuses on Feb. 3.

Emery Eisner and Maeve Ashbrook contributed to this report.