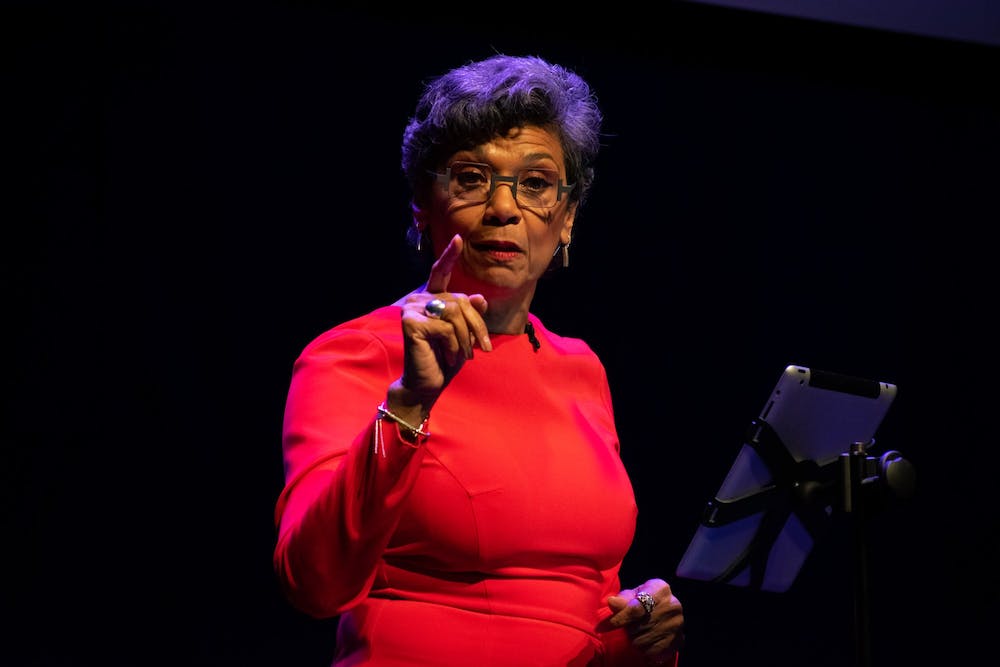 
Sonia Manzano talks about diversity at McCrary Theatre on Jan. 14.

If you saw Sonia Manzano on Sesame Street in the ’70s, your children could have seen her act the same part. Manzano played Maria, the same character, for 44 years.

“So much of his words were so poetic and inspiring and visionary in that they pertain to our times now,” Manzano said.

For many around the country, Maria says she encountered many who told her she was the first Hispanic woman on they saw on television. Manzano’s legacy is giving a voice to the inner-city Hispanic population, a group she directly relates to.

“Let's say an announcement for a, for a fun park that was opening and they wanted to go and how difficult it was for a parent to have to tell that child, I can't take you to that fun park because African American children aren't allowed to go to that fun park,” Manzano said. “That really touched something in me because as you know, I deal with children and have been dealing with children on Sesame Street.”

Manzano said that she was grateful for Sesame Street’s success, and attributes her eagerness to pursue her dreams as an actress and open-minded personality to her success.

“I was always curious about the bigger world” Manzano said. “I knew there was something more than the struggles my parents went through every day and keeping their nose to the ground. I admire them for that. I knew that there was something better out there and bigger.”

According to Manzano, this new decade brings the same challenges she faced in the late ’60s and ’70s.

“I'm really sorry that we're in the situation we are now because I really thought that at Sesame street in 1969, we were going to be going to eradicate racism,” Manzano said. “We were showing a diverse cast on the show and we were going to close the education gap. Really had high hopes that that time.I'm very distressed that it seems like we've forgotten everything that we've learned."

Manzano does say she has optimism for this generation, and attributes that to more people speaking up about problems in society.

“If I have to find anything good in it is that things are more out in the open now and I think people are more willing to talk about them,” Manzano said.

Manzano also said she hopes Elon students take away from her talk that diversity is important.

“I think that I've learned and I hope to share with people that a diverse group comes up with better solutions quicker because a group of different people looking at the same problem will look at that problem from different points of view,” Manzano said.

The 69-year-old is also a supporter of The Bronx Children’s Museum and plans to help open its permanent location this year with Associate Justice Sonia Sotomayor.