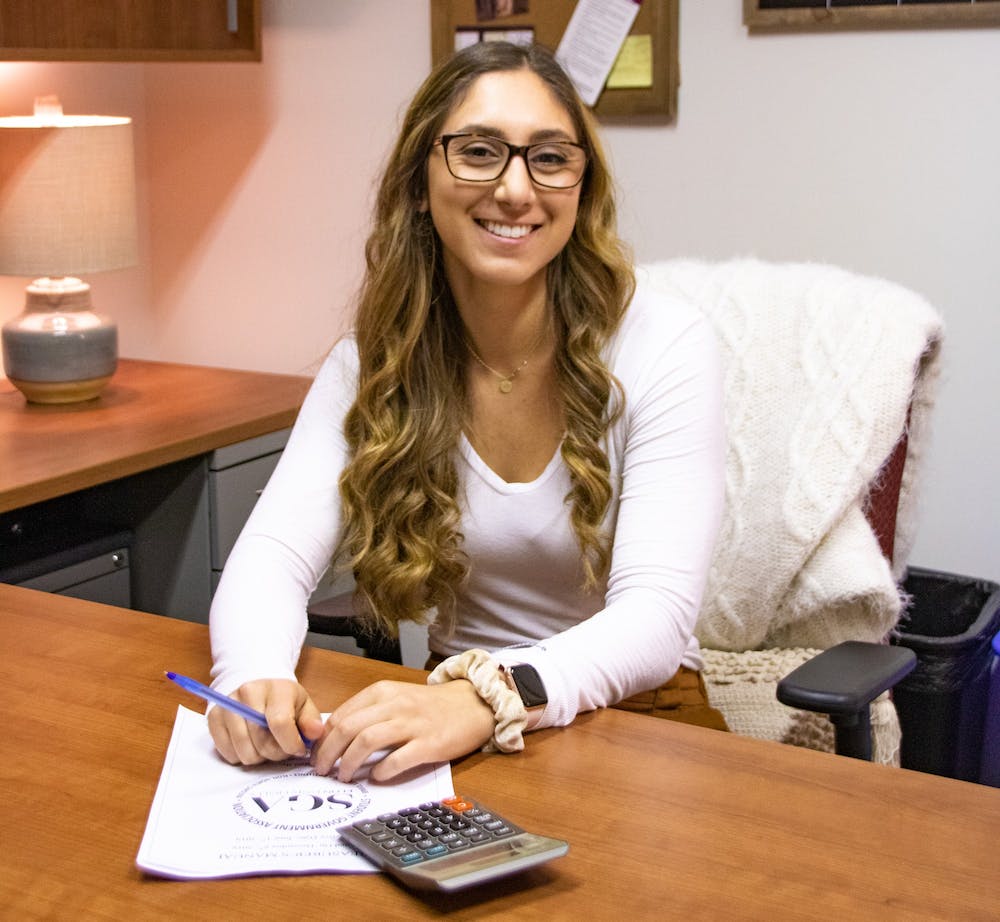 Photo by Jakob Reuter | Elon News Network
Senior and executive treasurer of the Elon University Student Government Association Amanda Yaffa sits at her desk with the new treasurer’s manual in front of her.

Yaffa said she also hopes to be able to increase the amount of discretion held by the executive treasurer for small requests, such as money for food, at a meeting. According to Yaffa, this could help alleviate stress on the finance board and cut back on the wait time for larger requests, which she said is the source of the majority of complaints directed at the finance board.

Jana Lynn Patterson, dean of students and SGA advisor, works with Yaffa and the accounting team to process requests over a period of up to four weeks, according to Yaffa. If a request includes a receipt that is not itemized or does not show the last four digits of the credit card number used, the request will be denied and must be resubmitted, which draws the process out for a longer period of time.

"I do think this treasurer's manual has been great. by no means am I trying to redo this whole process. But I do think that we can make it in a way that is benefiting more organizations, organizations that have been struggling a little."

Information regarding budget allocations, both to organizations and individuals, from the fall semester will be made available to the public by the beginning of the spring semester, Yaffa said.

“I do think this treasurer’s manual has been great. By no means am I trying to redo this whole process,” Yaffa said. “But I do think that we can make it in a way that is benefiting more organizations, organizations that have been struggling a little.”

The treasurer’s manual was drafted by former executive treasurer Max Pivonka ‘19 and was implemented in June 2019. According to Pivonka, one of the main goals of the new funding model was granting more access to smaller organizations.

The old model “didn’t really reflect change in our campus climate and the changing nature of our student body,” according to Pivonka.

“I think with smaller organizations, they have the opportunity to apply and to apply more,” Pivonka said. “At the end of the day, whether people are seeing it or not, the funding is a lot more accessible than it has historically been.”

Pivonka also said that the new model – which was heavily inspired by Northeastern University’s finance model – is more “equitable” since it “provides more of a check on SGA,” because it has to request funding like every other organization. However, according to a report by Northeastern’s student newspaper, the university recently shifted to a system of annual budget allocations much like the system Elon’s SGA used before Pivonka drafted the new model.

Northeastern’s new system, in which the majority of funding allocations are granted annually, allows the budget to be spread out more “equitably,” according to Northeastern SGA comptroller, David Hope.

Hope said with Northeastern’s new system, the finance board has less “financial oversight” since the new model grants greater flexibility with organization spending. Both systems have “pros and cons,” according to Hope.

Since the new manual has come into effect, organizations such as North Carolina Student Legislature have struggled with changes in regulations. Sophomore Daniel Dorociak, treasurer of NCSL — an organization in which students can write resolutions and debate them up to the state level — said he has had issues with funding conferences: the new model restricts the amount of money that can be allocated for hotel rooms to $80 per night, which is not enough to cover the full cost, according to Dorociak.

Pivonka said that while some SGA funding should help students get to conferences, it isn’t meant for students “to be staying in the nicest hotels.” He said he acknowledges that “80 bucks is tight, but a lot of times you can find a hotel room, depending on where you are, around that range. It’s doable is what it comes down to.”

While initially Dorociak paid approximately $300 out-of-pocket to cover the withstanding costs for NCSL’s hotel stays, he said the department of political science has since reimbursed him.

NCSL advisor and assistant professor of political science Baris Kesgin declined an interview but said political science “has been supportive” of Model UN and NCSL. He added that “both organizations have been adapting to the SGA’s new funding procedures, which all student organizations must follow. The Department has been committed to support these organizations when their expenses are not already covered by the SGA.”

Pivonka attributed the frustration with the new model to the fact that this is the first year of its implementation.

“We anticipated that there would be some growing pains, I’m sure there already have been some, I think that’s one of the nice things about the treasurer’s manual, it is a flexible guide,” Pivonka said.

However, former SGA senator Stefanie Milovic ‘19 said the manual’s lack of explicit guidelines has led her and other students to fear speaking out against SGA.

“The rationale here is the student government is also responsible for allocating funding to every organization on campus, and as I’m sure every student can attest to, their organization, their kind of chosen family, is the crux of their Elon experience,” Milovic said. “There lies that fear every single time they apply for funding, then. Is my comment going to impact my organization and its future performance? That’s why so many people are afraid to say something. Because whether or not it will definitely impact their organization, there is always that fear of it.”

Milovic said that while the “concept” of SGA is “absolutely full of principle and integrity,” it is impossible to ignore the biases that each person carries.

Yaffa said she shares concerns about the “discretionary” nature of the finance board.

“I bring things to the finance board and certain things are just up to their discretion,” Yaffa said. “The way I present things can also lead to certain outcomes, and so the person that’s in this position has to be aware of that. I do have concerns with that, and that’s something that’s hard.”

Yaffa said this issue is also something she hopes to change when revisions to the manual occur over Winter Term.

The assistant to the executive treasurer, senior Franky Storm, said he considers the lack of specific regulations stated in the treasurer’s manual to be a strength.

“It isn’t restrictive. There is a reasonable amount of discretion allowed to the finance board,” Storm said. “I think we’ve done a very good job at understanding in particular that we’re the first finance board, and that means that there are a lot of decisions that are going to be setting precedents. So we make sure that we have a discussion about what this means for the future every time we make a decision.”

According to Storm, it is worth students “knowing that it really has been working out.”

“It’s been profoundly successful and it’s going to do a lot of really good for organizations on campus,” Storm said. While he addressed NCSL’s issues with funding at a recent SGA town hall, he said it was also important to recognize the successes of the model.

“It’s important that we realize that particular organizations, like, let’s say NCSL, may not have had this problem in the past, but there were other organizations that weren’t receiving funding that they needed, and we’ve already allocated more money this semester than the previous model allowed us to,” Storm said. “And I don’t want to diminish the amount that the model can be frustrating for some organizations but … we’re actually helping more organizations than the few that are being hurt.”

Senior Matthew Mitton, treasurer of Phoenix Phanatics, said his experience with the new funding model has been “overwhelmingly positive,” and said that without the change to the model, Phanatics would be limited to “cheering in the stands,” rather than putting on events.

Yaffa said that student involvement will be necessary when changes to the model are being made.

In a mass email sent on Jan. 6, Yaffa provided a link to a survey about SGA funding, writing that at the close of the fall semester, “SGA and the Finance Board are wondering how the first semester on the new SGA funding system affected you and/or your organization. While the new system has benefited many organizations, we do believe there is room for improvement.”