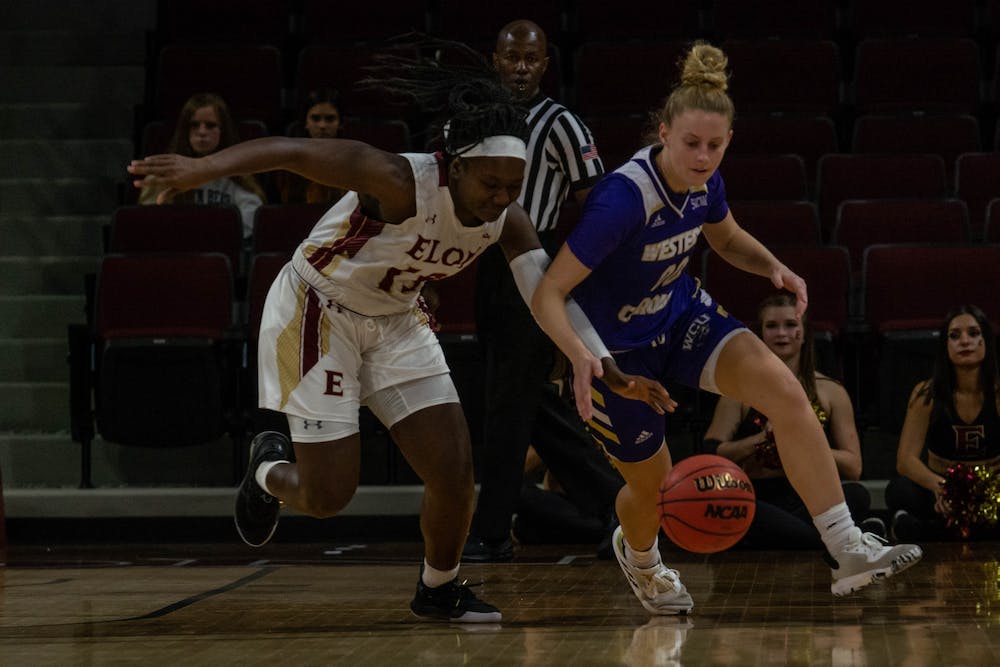 
Elon junior forward Jaylin Powell steals the ball from a Western Carolina player. The Phoenix's defense was dominant in their blowout victory on November 9.

The Phoenix defense dominated the Catamounts. The team only allowed 10 points after the first quarter and held its opponent to a measly 18.9 field goal percentage. The defense also collected 12 steals and forced 22 turnovers. This all coming against a Western Carolina team that scored 55 points against the University of North Carolina on Thursday.

"They turned it up tonight,” head coach Charlotte Smith said. “I was very impressed with the defense. We talked about being disruptive and trying to keep them out of the rhythm, especially with that five out offense and I felt like we did a really good job of that.”

The team was also very aggressive on the offensive and defensive boards. The Phoenix out rebounded the Catamounts 45-30. Smith said that coming into the game one of the goals was to secure 40 plus rebounds. What pleased Smith was that not only did they reach this goal but every member of the team got at least one rebound.

“We're a very deep team. I feel like we could start with five, sub five in and keep it going,” Smith said.

Strong defense and rebounding lead to positive offense for the Phoenix. Redshirt junior guard Jada Graves led the team in points with 12. She was followed by sophomore guard Brie Perpignan and junior guard Saadia Munford who each had nine points. Perpignan said that the offense was directly related to the effort on the other side of the court.

“We always start with defense. Our defense dictates our offense and that was really what happened,” Perpignan said.

In the opening quarter both teams traded even blows. Graves got out to a hot start scoring the opening point on a fast break layup. Graves would also knock down a three pointer to extend the opening Phoenix lead to 7-2. Both teams would go on small runs and the first quarter ended 18-14 in favor of the Phoenix.

Elon separated themselves in the following quarter. The Phoenix went on a 14-0 run for the first six and a half minutes of the second quarter. Twelve of these points came on three point plays, three three-pointers and a and one bucket from junior forward Jaylin Powell. The run was broken by a Western Carolina layup but this would be their only points of the quarter. At halftime the Phoenix had a commanding 34-16 lead.

The defensive dominance continued for the Phoenix in the third. The Phoenix allowed just a single field goal in the third quarter. Meanwhile the offense added another 17 points to their ever growing lead. The cherry on top for the Phoenix was a corner three from redshirt sophomore guard Ariana Nance at the buzzer. The Phoenix lead 51-18 going into the fourth.

With the game firmly in hand, Elon continued to attack the rim. The Phoenix rattled off four straight points in the paint to open the final quarter. The Catamounts showed some signs of life hitting two three pointers but the game was already out of reach. The Phoenix secured its first regular season win 68-24.

The women's basketball game will return to Schar Center when it takes on the Appalachian State Mountaineer on Wednesday, Nov. 13.