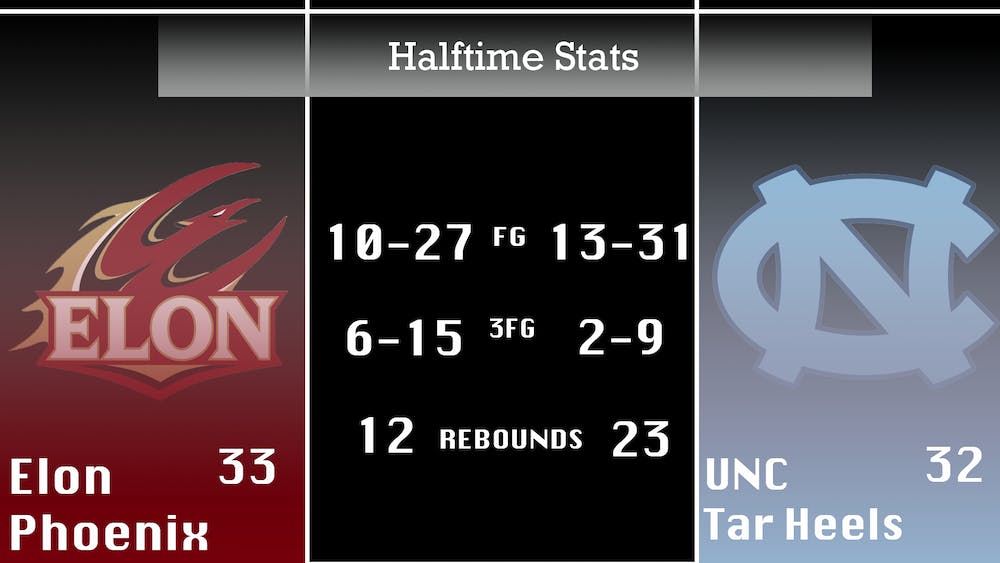 Coming off back-to-back losses against Georgia Tech and the University of Michigan, Elon men’s basketball is tasked with facing its toughest opponent of the year: the number five ranked University of North Carolina Chapel Hill.

The Phoenix jumped out to the early advantage. With 17:51 left in the half, Elon led the Tar Heels 8-4, with six of those points coming from three-pointers.

After a Roy Williams timeout, the Phoenix continued its early offensive production from behind the arc, with threes from graduate transfer guard/forward Marcus Sheffield II and freshman guard/forward Hunter Woods. With 15:13 left in the first half, Elon held the 14-9 lead.

The duo of Sheffield and Woods provided a spark for the Phoenix offense early, combining for 14 of the team's 22 points in the first eight minutes of the game. Woods also provided the assist on a Sheffield dunk with 12:25 on the clock.

Down by as many as nine points early in the game, the Tar Heels found a way to strike quickly to tie the game at 25-25 with 8:14 left before the break.

The defense on both sides would tighten up, with neither team scoring for over three minutes. A bucket from UNC graduate guard Justin Pierce gave the Tar Heels its first lead of the night at 27-25 with just over five minutes left and ended the long scoring drought in the game.

Late in the half, the Phoenix would go to the free-throw line to find points, converting all seven of their free throws in the first half, and taking a 33-31 lead with 1:18 left. After UNC converted a free throw of their own, the half ended with Elon in the lead, 33-32.