Early onslaught is too much to overcome 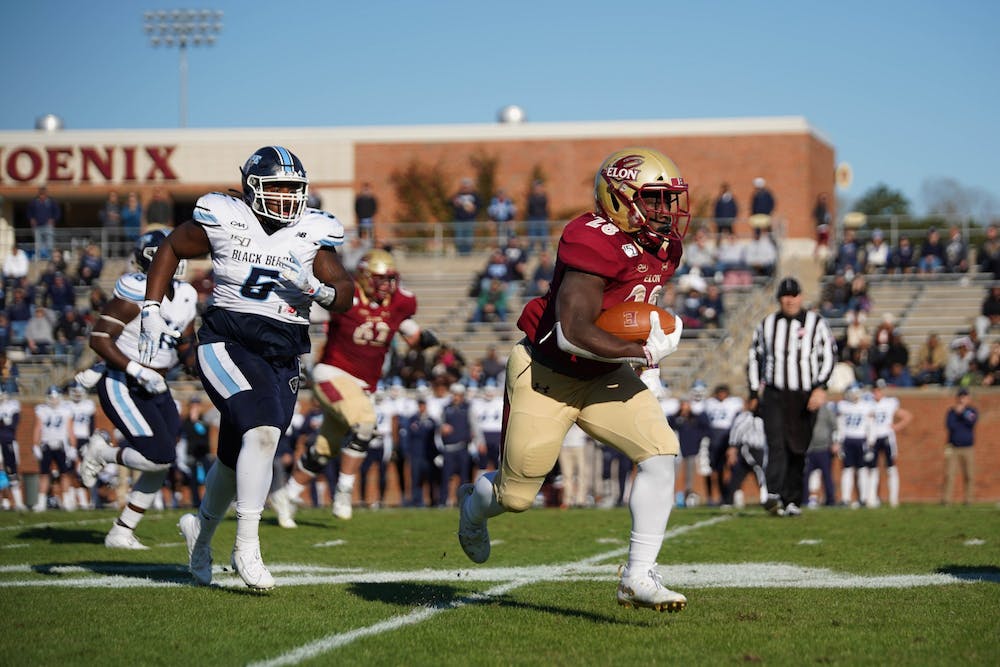 
Senior running back De'Sean McNair hustles past a Maine defensive back during his senior day at Rhodes Stadium, Saturday Nov 9.

“I mean they’ve done something that no other class has done,” head coach Tony Trisciani said. “Back to back FCS playoff appearances and we've won a lot of football games together. I'm real proud of them and and happy that they've had the success that they've had because they've worked real hard and they deserve it.”

The first quarter was not the Phoenix finest hour. In just eight Black Bear plays, the Phoenix found themselves behind by 14. In the Phoenix first kickoff return, Maine knocked the ball loose for them to start their second possession on the Elon 21-yard-line, and capitalized almost instantaneously.

“It’s a tough way to start a game, we dug ourselves a real big hole in the first quarter,” Trisciani said.

That seemed to be the pattern of the first quarter, the first fifteen minutes ending with the Black Bears up by 28, and Elon looking for some inspiration.

“There's no 28 point play,” Trisciani said. “It was about one drive at a time and seven at a time and just ask them to fight and try to win their battle.”

The Black Bears seemed to ease their foot off of the gas in the second quarter, and the Phoenix tried to get back into the game.

Sophomore kicker Skyler Davis completed a 39-yard field goal attempt, giving the Phoenix its first three points with under seven minutes remaining in the first half.

At the tail end of the half, the Black Bears were in the red-zone when senior defensive back Daniel Reid-Bennett intercepted the ball on the goal line. But the Phoenix were unable to capitalize off of the interception and they trailed at halftime 28-3.

The Phoenix escaped the second quarter without conceding points, and carried that energy into the second half. The offense came out strong, ending their opening drive with a 12-yard touchdown run by junior running back Brelynd Cyphers.

After stalling on a few possessions, Trisciani opted for some trickery on a fourth quarter punt. The snap, instead of going to redshirt junior punter Hunter Stephenson, went to senior defensive end Marcus Willoughby. Willoughby made it to the Maine 38 and gave the Phoenix a second chance.

The Phoenix found themselves unable to capitalize once again, fumbling the ball back to the Black Bears on the very next play.

Senior running back DeSean McNair came up big to give the Phoenix their second touchdown of the game. The six yard rush brought the Phoenix to just a two touchdown game, 31-17 in Maine favor.

Down two touchdowns, special teams lined up for an onside kick, which failed twice. The first attempt was successful but was brought back after an offside penalty. The second was recovered by the Black Bears.

The Phoenix advanced 30 yards in a row from penalty calls on its next possession, ending up on the Maine 26-yard-line. The sixth sack of the game on Cheek brought the Phoenix 25 yards out of the endzone. Cheek took the ball himself on the 4th and 22 play, making it to the 15-yard-line before being pushed out of bounds.

Maine took over on downs, took a knee and drained the remaining time to end the game.

The Phoenix will enter their second bye week of the year in the upcoming week. The team will then travel to Towson University for its final regular season game, Nov. 23.