Researching Islamophobia within the airline industry 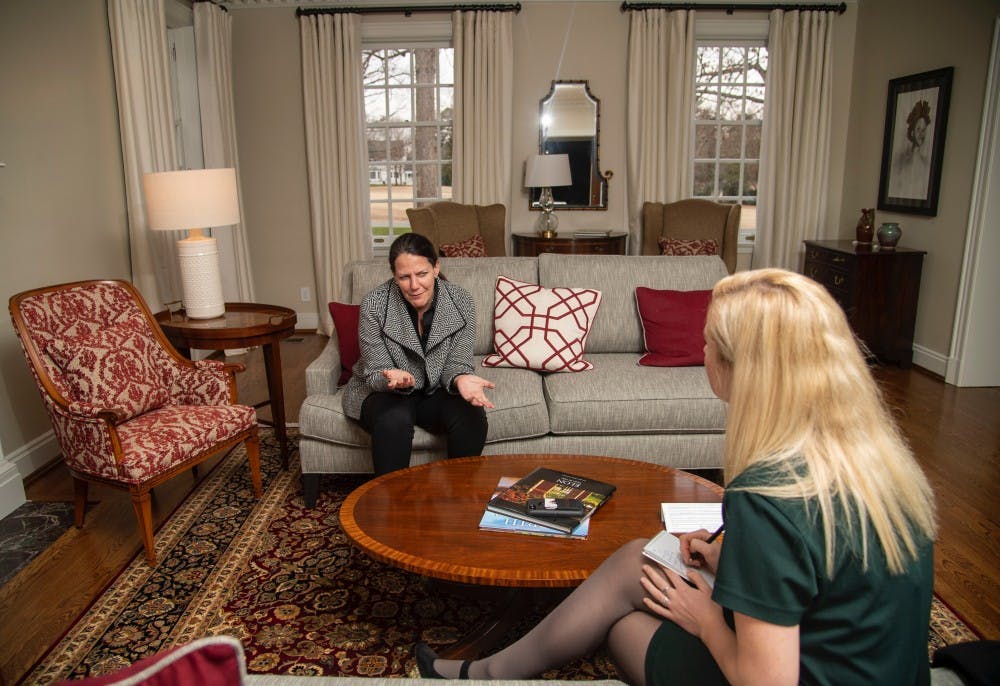 As the child of two commercial airline pilots, Elon University senior Sonya Walker never thought she would be studying her parents’ industry while in college.

Her parents have been pilots for over 25 years and both were established in their flying careers when al-Qaida, flew two planes into the Twin Towers on Sept. 11, 2001.

The hatred, fear or prejudice of the Islamic religion or Muslims.

Having grown up in a town with fewer than 100 residents, Walker’s exposure to different perspectives surrounding Islam and other religious traditions was limited.

It wasn’t until Walker went to college that she saw how deeply that day affected her parents’ industry.

“I never really understood the full scope of how Islam was viewed and treated in the U.S. because of the lack of diversity in my life at the time,” Walker said.

When coming to Elon, Walker said she wanted to study Arabic in hopes of becoming a foreign correspondent but never expected that it would lead her to take an Islamic traditions class.

“From that point on, I knew this is exactly where I needed to be. I realized growing up I had an absence of all these traditions,” Walker said. “I had no experiences or friends that identified with them at all. I had such a small bubble. For me, that was the gateway to becoming more of a global citizen.”

a radical Sunni Muslim organization dedicated to the elimination of a Western presence in Arab countries and militantly opposed to Western foreign policy.

It wasn’t until her class discussed media representations of Islam in America that her “worlds clicked.” Her background in news, her love for religious studies and her upbringing in the airline industry led her to become enthralled by “many practices of Islam.”

In spring 2017, Walker was accepted into Elon’s Multifaith Scholars program. The program is a two-year, closely mentored, experiential and academic program that aims to support multifaith leaders on campus.

Walker has worked alongside Ariela Marcus-Sells, assistant professor of religious studies, and Colin Donohue, director of School of Communications student engagement and alumni affairs, to investigate Islamophobia and racial profiling in the U.S. airline industry.

After conducting dozens of interviews with pilots, Muslims and Sikhs, Walker said her main observation is that the airline industry and passengers alike are still feeling the lasting effects 9/11.

“I don’t want to speak for everyone,” Walker said. “But I have heard several people, primarily Muslims, say that they allot for extra time in airports to get through security and that more often than not, they are ‘randomly’ checked.”

In one interview with a college-aged Muslim, Walker said she was caught off guard by how casually he joked about having to get to airports hours in advance because he knew he would have to go through extra security checks, maybe even missing his flight due to the intense screening process.

Just two weeks ago, a flight from Alabama to Texas was canceled because the crew “didn’t feel comfortable” with two Muslim men onboard after they waved to each other while stepping onto the plane. The two were placed on a later flight after being questioned and searched by the FBI and the Transportation Security Administration.

Charlie Walker, Sonya’s father, said her project is worthwhile with the aim of decreasing racism in the airline industry.

“Change is hard. It’s hard in any industry. But I would like to see racism go away everywhere, not just in the airline industry. It needs to happen,” Charlie said. “I do think it’s a great project, and I couldn’t be more proud of her.”

Despite Islamophobia in the industry, Walker said she is encouraged by the open-mindedness and compassion many pilots have shown.

Walker said her project has shown her pure hurt in ways she could have never imagined but has given her a glimmer of optimism, which she hopes to continue to cultivate and foster within the industry.

Beyond her academic research, Walker said the Multifaith Scholars program has been a place of mutual support and continual engagement with different religious groups in the area. Walker serves as a community engagement leader, working closely with the Burlington Masjid for a variety of events.

After the 2019 New Zealand terrorist attack, where 50 people were murdered in two separate mosques, Walker and others in the program went to the Burlington Masjid to show their solidarity.

“I remember standing outside the masjid and being surrounded by people I knew and that I was friends with and that I felt personally connected to,” Walker said. “I felt so present with them in that hurt and in that grief. There was also such a sense of hope that day because we were all together.”

Allocco said, it is this type of learning and working with differences that has made the program “exactly the kind of engaged and deep experiential learning that yields more informed, critically-minded and empathetic global citizens.”

Burlington Masjid’s Youth Coordinator Moneeb Sayed said he and his community continually look forward to working with those in the Elon program.

“We think that the Elon students are a wonderful and integral part of the community,” Sayed said. “Without young minds like theirs and their enthusiasm to broaden their horizons and learn about the world around them, the world would be a dark place.”

For Walker, she said this type of engagement and involvement with the community has made it possible for her to incorporate all of her passions and talents. Walker will be using her research to create a long-form journalism article in addition to an academic paper that will be presented in the spring.

Walker said she is grateful for the ways her project has broadened her mind, both academically and personally, and allowed her to go outside of her comfort zone due to the challenging nature of the topic.

She said her classes, research and friendships have encouraged her to hold different perspectives and accept people as they are.

Walker started a religious studies club in order to create a student-led space for people to come together and build a sense of community while studying and researching these difficult topics.

This semester will be the first time the club meets, and it plans to have regular meetings on Tuesday nights at Pandora’s Pies for “Dollar Slice Night.”

“My collegiate career has been so transformed by my research and by Multifaith Scholars,” Walker said. “And we just want to bring those who aren’t given the opportunity to have support like we have in the program.”

"I hope to connect people who otherwise might not know how."

Walker said she hopes the club will be a place for people to come to share ideas, show support and encourage each other in their own classes, projects and lives.

Walker is currently working on a long-form journalism piece that she hopes to publish in the spring. Additionally, she will be writing an academic paper where she will present at multiple outlets next year.

Her main hope is that people time to listen to other’s experiences and stories.

“To take someone else’s experience and put it in conversation with our own personal experiences is what makes human connection possible,” Walker said. “I hope to connect people who otherwise might not know how. It’s all about the human experience and helping people understand that we are all in this life together. That’s everything to me.”