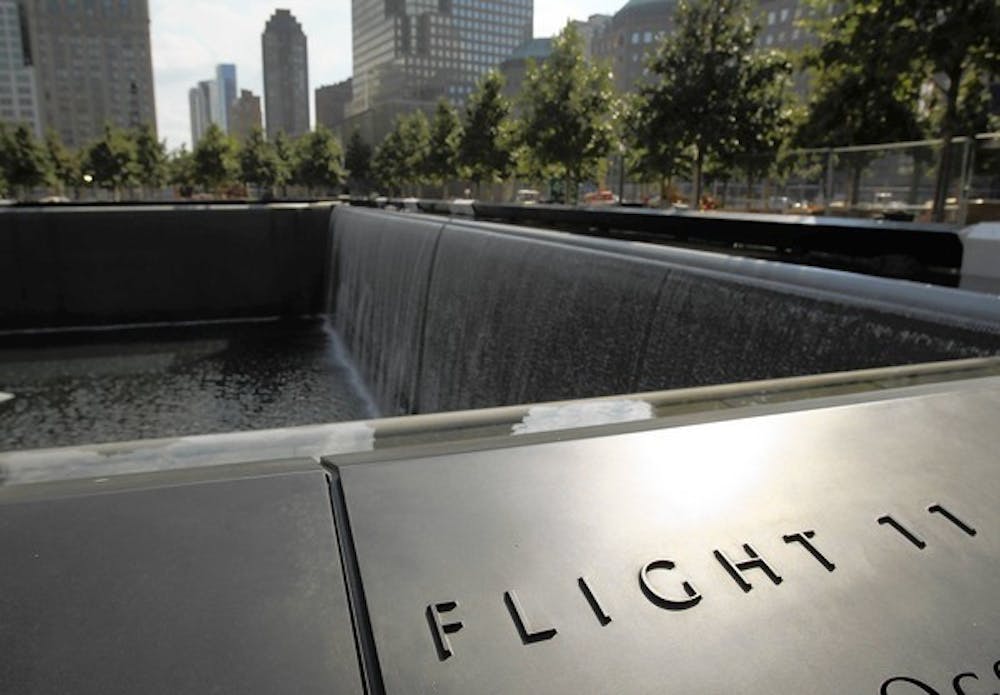 At the heart of the National September 11 Memorial are twin reflecting pools that are meant to evoke the absence of the fallen towers. Bronze panels that ring both pools bear the names of all 9/11 victims, as well as those who died during the 1993 trade center attack. Photo courtesy Scott Strazzante.

Wednesday, Sept. 11 is the 18th anniversary of the attacks on the World Trade Center. While many Americans can recall where they were on the day, there is a new generation of adults who were not alive for the event. The Class of 2023 is the first class to have students who may not have been born before the attacks took place.

Jim Bissett, professor of history, remembers receiving the news about the attacks while at Elon University.

“I was actually here on campus. And actually, the attacks happened right about the time [of] college coffee. … I remember going out to college coffee and talking with other people there. We were all just trying to process what had happened,” Bissett said.

While most members of the Class of 2023 weren’t born until after the event, some have been told stories. Freshman Abby Saracino’s story of 9/11 took place across the world in New Zealand.

“Me and my mom were over there visiting that week, and we were actually supposed to come home the 12th … and we couldn’t fly home because no one was allowed to fly into New York,” Saracino said.

“It’s weird,” she said. “...the only way that we know about it is from other people telling us about it, and a lot of the times that comes from anecdotes,” Curling said.

There’s a war going on

Thomas Kerr, adjunct professor in political science and policy studies, said even though some students were not alive for the attacks, they have grown up in a country at war because of it.

“We have a whole generation that’s been living in a state of conflict, though it is thousands of miles away and many people don’t have direct interaction with the outcomes of it,” Kerr said.

“The war on terror started right after [Sept. 11] and I wasn’t old enough to remember when that started, so I’ve grown up in, politically, in a world where there has always been a U.S. presence in the Middle East,” Skadron said.

The War on Terror is not the only constant in this generation’s life.

Assistant Professor of Anthropology Muriel Vernon said this generation might have gotten used to being attacked.

“Your generation has experienced terrorist attacks, maybe perhaps not at that scale, but more frequently,” Vernon said. “Maybe we’ve also gotten used to, you know, the possibility of being attacked.”

Vernon had this realization while in a movie theater after an alarm went off. She watched as her partner’s son and friend fled the building before she had even put on her coat.

“They were just gone. And it was really sad because they thought there was a shooter…” Vernon said. “The mentality of when an alarm sounds these days for your generation, you have been conditioned very differently to these kinds of things.”

Sandy Marshall, assistant professor of geography, said he brings up Sept. 11 in nearly every class he teaches. He has taken notice of the steady decline in students who remember the day, but that’s not what strikes him.

“Students don’t remember the actual day or they don’t remember, you know being able to go directly to the gate at an airport or stuff like that, it’s that they don’t remember a time we weren’t at war,” Marshall said. “They’ve been alive for 18 years, and their whole entire adult lives — their entire lives period has been at war in Iraq and Afghanistan. They’re just used to perpetual war. And that to me is the most depressing thing. I’ve got students now who are in the ROTC and they may very well serve in Afghanistan, a war that their parents may have served in; in a multi-generational endless war.”

9/11 for the new generation

David Bockino, assistant professor of sports management, said he was trying to explain Sept. 11 to his young son.

“I was trying to explain it to my son, and I still don’t exactly know what to do because ... there’s not a lot of simple reasons why it happened,” Bockino said. “There’s two decades of geopolitical issues and religious factions and, you know, kind of centuries and millennia of fighting and territory disputes and colonialism; there’s so many things wrapped into it.”

HBO has two documentaries slated to air on 9/11, one of them, a film aimed at explaining 9/11 to the new generation.

According to the description, the film is “both thoughtful and informational, [and] puts this historical event into context so that children can better understand what happened that day and its continued effects on the world around us.”

Curling said she hopes the new generation remembers the victims of 9/11 but hopes that one day the event becomes what she says it is: a historical event.

“I think that it’s also healthy at a point to kind of not let it be something that sits in your mind every single day,” Curling said. “It still is that for some people.”