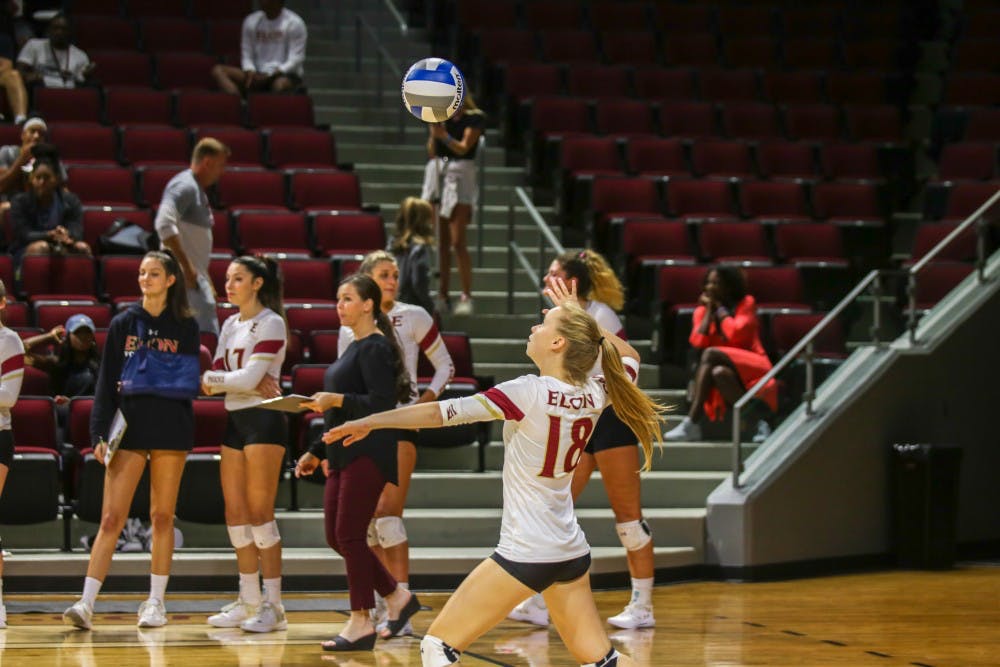 Gower comes in from a four-year tenancy with her high school team in Raleigh, North Carolina, something head coach Mary Tendler said helped in her recruiting.

“Jordan is close to home. She plays for triangle, and so we’ve been able to follow her for a while,” Tendler said. “We weren’t sure if we were going to want another defensive specialist on our team, but it just kind of all fit, and we decided we wanted to get it. We looked at a lot of defensive specialists all throughout the country, and we felt she was the best one.”

On her high school team, Gower collected over 1,000 digs in her career, later being named All-State Section in 2017 and 2018 as well as an Under Armour All-American Special Mention in 2018.

“The thing that she does really well is she can pass the serve,” Tendler said. “Every time the ball comes to her, she just nails it. She’s so quiet and calm, and that’s how she plays, so there’s not a lot of extra movement. She’s just so consistent as a passer.”

Transitioning to collegiate play was a challenge for Gower, she said, as it is for most freshmen athletes. The level of play is much higher compared to that of high school play, but Gower said her upperclassmen teammates helped her through the transition.

“Everyone was super supportive coming in, and they helped all of us freshmen out whenever we needed it,” Gower said.

Tendler said she was impressed not only by Gower’s transition but by her willingness to play all over the court.

“We play a lot of different defenses, and so to learn that is hard, and we asked her to be able to play it right back, middle back or left back,” Tendler said. “She’s got to learn three or four defenses and all the positions, but once she learned where to be on the court, then she was good.”

This year, Gower and the Phoenix have had to play top-notch teams including Virginia Tech, James Madison University, University of Virginia, Wake Forest University and, just recently, Towson University — who in Colonial Athletic Association play has lost just two sets, one to Elon and the other to JMU.

Among these teams, Gower said her favorite game to play was against Wake Forest, where Elon pulled out a strong win against the once-undefeated Demon Deacons. Gower said it was especially important for the Phoenix because the upset came against an Atlantic Coast Conference team. The ACC is home to teams such as Florida State University, University of Notre Dame and Boston College.

As a defensive specialist, Gower’s height actually comes into play less frequently than it would for the other players on the court.

“When an outside hitter or someone is front row, I come in for them in the back row. So instead of them playing defense, I play defense,” Gower said.

Tendler also said her height did not come into question during recruitment.

“It’s nice if you can have [tall] players even in the back row because balls that get deflected go higher, but she’s really quick,” Tendler said.

Gower certainly proves her height will not be an issue for the team. In the 73 sets that Gower has played this season, she ranks at No. 2 in digs with an astounding 194. Junior defensive specialist and co-captain Isabella Seman ranks at No. 1 with 208.

But Tendler said she hopes Gower doesn’t stop there.

"She's the person that they just all kind of go to and she's just a really likable person. She's just someone that you want to be around and practice."

“We would like her to be louder on the court and be able to direct traffic a little bit,” Tendler said. “Eventually, she’s going to get those leadership skills.”

The Phoenix are currently 4-3 in CAA play. This past week, the Phoenix played the top teams in the CAA: JMU, Towson and University of Delaware.

The Phoenix lost to JMU and Towson but pulled off another upset against Delaware, grabbing the win in the fifth set. The second half of the season will end the same way, playing the top three CAA teams, except this time the Phoenix will not have the home court advantage on its side.

One thing that fans can count on for the remainder of this season is Gower’s sunny disposition and the team’s affection toward her. Tendler said she’s one of the most likeable people you’ll meet and that “everyone just loves Jo.”

“She’s the person that they just all kind of go to, and she’s just a really likable person,” Tendler said. “She’s just someone that you want to be around and practice. She works hard, and she gets the job done. So I think everybody’s just really confident in what she can do for our team.”