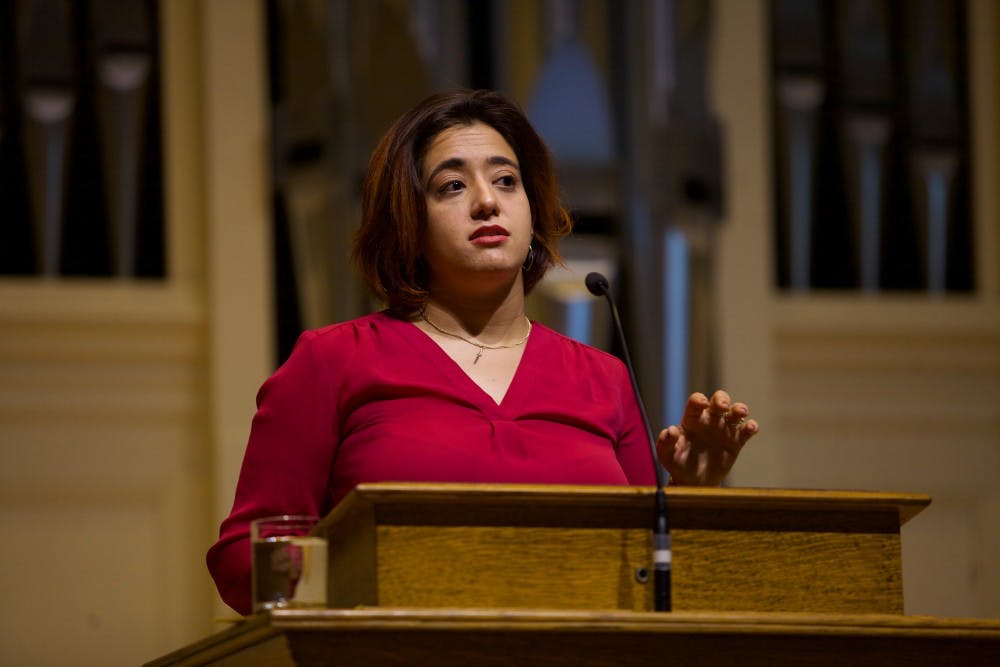 After she was assaulted at University of North Carolina at Chapel Hill, Andrea Pino-Silva filed a public complaint against the school. Pino-Silva was one of the first people to file a Title Ⅸ complaint, sparking a nationwide movement in 2013. Since then, she has co-authored the book "We Believe You: Survivors of Campus Sexual Assault Speak Out" and starred in the documentary "The Hunting Ground."

“I've had the privilege of being able to be a full time advocate, writer, researcher on the area of campus sexual violence,” Pino-Silva said.

Pino-Silva was on Elon’s campus for Supporting Survivors Week, which is full of events centered around “believing survivors and working to end gender based violence” presented by the Gender and LGBTQIA Center. Pino-SIlva’s talk, featuring both her story, statistics on gender based violence and a question and answer panel, was hosted by both the GLC and the Liberal Arts Forum.

“What I specifically like to focus on is storytelling and how survivors can take action and mobilize using tools that they have at home,” Pino-Silva said.

Mary Katherine Stallsmith, member of the LAF, pitched the idea for Pino-Silva to come to campus.

“As a first time college student, LGBTQ activist and a person of color, she really brings a perspective to this school that we don't always hear or see,” Stallsmith said.

After watching the "Hunting Ground," Stallsmith said that was the first time she realized sexual assault on college campuses are a problem.

“It really shook me because I was about to apply to college and that was a school in North Carolina. It's 45 minutes away. And so it really caused me to think, how can we fix this?” Stallsmith said.

Both the GLC and LAF had cocktail hour with Pino-Silva before her presentation. Julia Goldstein, treasurer of the LAF said the presentation reminded students of the actions they can take if they have been impacted by sexual violence.

“She really emphasized that she as a student who was involved on campus was able to accomplish that much… There's often a lot of confusion about where to turn, what resources are available, and what power you as an individual have,” Goldstein said.

Sarah Rompalo, gender violence prevention coordinator at the GLC, said she appreciated that Pino-Silva brought awareness to the issue of sexual assault everywhere.

“I think a lot of times, because we want to protect ourselves, we don't want to think it happens here. But it definitely does, and unfortunately it probably will in the future,” Rompalo said. “And I think her bringing this to Elon and also bringing the bigger message of believing survivors and supporting survivors, I thought that was super powerful.”

Pino-Silva’s number one piece of advice to students is to get to know Title Ⅸ.