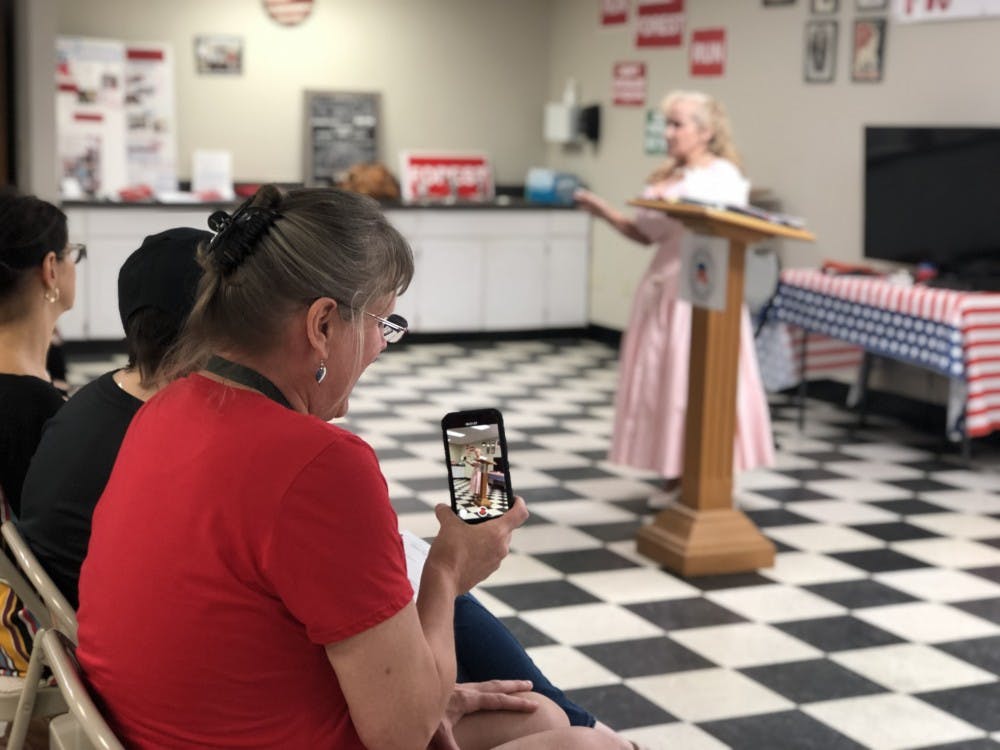 The Alamance county GOP headquarters is filled with colorful lawn signs, ‘Make America Great Again’ posters and for tonight’s event: pink 'Women for Trump' apparel all spread out across tables.

The organization invited retired Army Lieutenant Colonel Sherry-Lynn Womack to speak. Community members and supporters filled the entire back room to hear what she has to say.

“Jesus Christ is my savior — but Donald Trump is my president,” Womack said.

The audience erupted in cheers, clapping and shouting their approval.

“The last time I checked on a ballot box, I went by their morals and their character and I didn't go by their gender,” Womack said.

She received tremendous support from both the women and men in the audience, including the President of the Alamance Republican Women Barbara Acosta.

“She is leading to create a joyful group of women across the state and promoting conservative values,” Acosta said.

Womack, also the Director of Women for Trump North Carolina, did not hold back from sharing her beliefs.

“You can do whatever you want to, but when everything's said and done, Donald Trump has done more – promises made and promises kept – than any president in the United States.”

The army veteran expressed her displeasure for hate speech coming from both sides of the aisle. She made it clear that she does not appreciate slander towards the media and opposing political parties.

Good evening from the Alamance County Republican Women meeting in Burlington with @lauren_singles where Lt. Col. Sherry-Lynn Womack is set to speak pic.twitter.com/sDWJWrvpbA

“It disgusts me. It really does. It makes me sick. You know why? Because we are Americans. We're better than that. There should be no room for that.”

Womack connected her strong beliefs to personal stories, reinforcing her passions towards supporting the current administration. Citing the current impeachment inquiry, Womack said her mom has not been taking it very well.

“I've had to deal with my mom crying because she thinks Donald Trump is going to be impeached,” Womack said.

Womack fought overseas in Afghanistan in the 2000s. She says she came back to North Carolina and saw the American values she fought for being misused.

“It's taken for granted, and I don't mean to point fingers at anybody, but I will,” Womack said. “You are my own home state. You don't know what bathroom to go to. Do we have a problem? I think we do, right?”

Women and men of all ages came to hear her speak. Jackie Kane, a 1969 graduate of then-Elon College, said she is passionate about changing the momentum of the country to where she wants it to go. Kane said she’s a retired North Carolina educator that turned Republican as an adult.

“I started working with this organization and I'll fight to the death because I have grandchildren and great-grandchildren and I don't want to see them live in a socialist country,” Kane said.

Kane says she is concerned that essential freedoms are being taken for granted, and that the values of respect are no longer visible. She emphasized what she wants the country to look like for her grandchildren.

“I want them to live in a free republic. We're not a democracy. We're democratic. But we're a republic. I don't want to give up my guns. I don't want somebody to take my income,” she said.

There were even some college students in the crowd. 19-year-old University of North Carolina at Chapel Hill student Amanda Treaster is from Apex. She said this is her first time attending an Alamance Republican Women meeting.

“I love Trump,” Treaster said. “I’ve been working with the campaign since 2016. Normally I bring my sisters and we just love doing things to promote Trump and everything he is doing for our country.”

The Alamance Republican Women hold meetings on the first Thursday of every month.